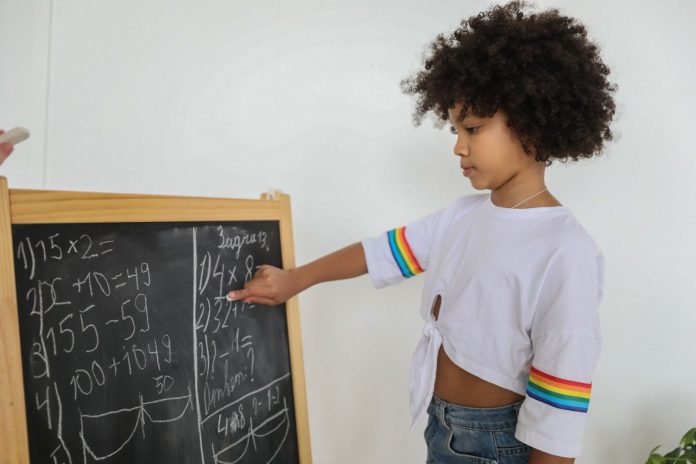 Do you think you’re good at math? Do you think you know more than the average person when it comes to math trivia? Well, we’ve got a challenge for you! We’ve compiled a list of 75+ math trivia questions with answers, ranging from easy to tricky. See how many you can get right!

Children engage most with fun math trivia questions that make them giggle. Here are 25 funny math questions that will turn your classroom or a pajama party of toddlers into a laughing riot or serve as excellent icebreakers in any type of gathering:

Q2: What do you call a hen that can count her own eggs?

A3: Because it has so many problems!

Q4: What comes six times in a day, four times in a week, twice in a month, and once in a year?

Q5: Who’s the king of the pencil box?

Q6: What’s the favorite season of a math teacher?

Q7: What’s the favorite dish of a math teacher?

Q8: Why did the plant in the math class become a curiosity in the town?

A8: Because it grew square roots!

Q9: Why are circles the hottest geometric shape?

A10: Because they are not comfortable with inequalities!

Q11: How does algebra help with dancing skills?

A11: It makes you good at algo-rhythms!

Q12: Which tool can you use to plow your farm?

Q13: What tool do mathematicians use to twist wires?

Q14: Who do both the acute and the obtuse triangles hate?

Q15: Why is Circle always ignored in a party of geometric shapes?

A15: Because other shapes think he’s pointless!

Q16: Why did square not attend the party of geometric shapes?

A16: Because it had an accident and became a WRECK-tangle!

Q17: What did zero think when it saw eight?

Q18: How did the boxer break the calculator?

A18: He tried to punch the numbers in!

Q19: What do children think about addition?

Q20: Why did the mixed-number fraction refuse to go out with the other fraction?

A20: Because it was improper!

Q21: How can one turn root beer into beer?

Q23: Why is the fantasy novel written by a mathematician so confusing?

A23: It had imaginary numbers!

Q24: Which geometric shape is most adorable?

Q25: Which monster is best at math?

A25: Count Dracula, of course!

Q1: What’s the only even prime number?

A1: 2. Every other even number is divisible by two and hence, not a prime number.

A2: The square root of two: 1.41! Also, it was the first irrational number to be discovered.

Q3: Which number cannot be represented in Roman numerals?

A3: Zero! There’s no symbol for it in Roman numerals.

Q4: Is zero an odd number or an even number?

A4: Even. It’s divisible by two and still creates a whole number, which is zero.

Q5: Which number has a spelling that has the same number of letters as the number itself?

Q6: Which is the smallest perfect number?

Q8: What is the similarity between Pi and Pie?

Q9: How does the word “Pizza” show the formula to calculate its volume?

Q11: What’s the most common number in the world?

A11: One! It’s the number that we use to count things, and it appears in almost every mathematical equation.

A18: A palindrome is a word, phrase, number, or other sequences of units that can be read the same way in either direction—forward or backward. For example, the number 11011 is a palindrome, as is the phrase “Madam, I’m Adam”.

Q19: Which number is greater: a googol, or a quadrillion?

A20: A number with 666 digits is known as an apocalypse number. It’s named after the Biblical passage in which the number of the Beast (the Antichrist) is given as 666. The smallest Fibonacci apocalypse number is F3184.

A23: The chaos game is a simple algorithm that can be used to generate fractal patterns. It involves picking a point at random inside a triangle and then finding the midpoint of the line segment between that point and each of the triangle’s vertices. The next point is then chosen at random from the three resulting midpoints, and the process is repeated ad infinitum.

A25: The golden beauty ratio is a mathematical constant that is approximately equal to 1.61803. It is often represented by the Greek letter phi, and it appears in many places in nature, such as in the spiral pattern of a nautilus shell.

To judge the attractiveness of a human face, its length and width are measured. The length is then divided by the width. The ideal result is closest to the Golden Beauty Ratio of 1.61803.

Trick math questions are designed to confuse you or misguide you while the answer’s right in front of you the whole time! Do you think that these fun math trivia questions are cute and easy to solve? Check your answers against ours and see how you fare!

Q1: If two’s company and three’s a crowd, what are four and five?

Q3: A grandfather, two fathers, and two sons went to the movie theater. How many tickets did they buy?

Q4: A woman goes out to buy bananas. All but 3 got ruined on the way. How many good bananas does she have now?

Q5: If there are 10 apples on the table and you take away 2, how many apples do you have?

Q7: How can you arrange only eights to get the number 1000 in a mathematical equation?

Q8: How did the soccer fan know the score would be 0-0 even before the game started?

A8: Because the score is always 0-0 when the game begins.

A15: Three cages and four dogs.

Q16: I bought a rooster today and the salesman told me I can expect two eggs per day. How many eggs will I have in a week?

Q17: You have a five-gallon jug of water and an empty three-gallon jug. How can you measure out exactly four gallons of water?

Q20: If there are 50 students in your class and you have to shake every student’s hand, how many times will you shake hands?

A20: 49. You will subtract yourself from the number of students in the class.

Q21: Arrange numbers 1 to 9 in the right order in a mathematical equation in such a way that the result is 100.

Q23: What’s the angle between the minute hand and the hour hand of a wall clock at a quarter past three?

How to Transform Math Time into Fun Time

Math games are a great way to engage kids in learning and help them develop important skills and concepts in a fun and interactive way. Games can also be used to review material that has already been learned or to introduce new topics.

Gamified math lessons, such as those found in many online math games, can also provide a much-needed break from the more traditional learning environment. As students practice their calculations and hone their problem-solving skills in math, they can have fun and earn rewards along the way.

One of the best ways to make math concepts more relatable and understandable for kids is to connect them to everyday situations. When kids can see how the numbers they are working with relate to the world around them, they are more likely to grasp the concept and gain the ability to apply it in other situations.

Always Use Positive Words When Talking About Math

The language we use when talking about math can have a big impact on how kids feel about the subject. When we use negative words, such as “hard,” “difficult,” or “boring,” it can make kids feel like they’re not good at math and that it’s not worth trying to learn. It can groom them to give up easily when they encounter a challenging math problem.

On the other hand, using positive words, such as “exciting,” “fun,” or “challenging,” can make kids feel more confident about their abilities and encourage them to persist when they encounter a difficult problem.

Encourage Kids To Talk About Their Thinking

One of the best ways to help kids understand math concepts is to encourage them to explain their thinking out loud. This not only allows you to see where they are getting stuck, but it also helps them to organize their thoughts and develop a greater understanding of the concept. When kids are able to verbalize their math thinking, it also allows you to provide specific feedback that can help them to correct any misconceptions and solidify their understanding.
Math is fun when you do not take it with unnecessary pressure. It’s full of riddles and puzzles and can even be used to play pranks on your friends! Check out our collection of math trivia questions that are sure to stump you and may have you reaching for a calculator!

Hope can I introduce my kids to math games?

There are many different types of math games, including classroom math games, online games, board games, card games, and even physical games. A math game is an interactive way to engage kids in learning and help them develop important skills and concepts in a fun and exciting way.

What are some benefits of playing math games?

Math games can provide many benefits for kids, including helping them to practice important skills and concepts, introducing new topics in a fun and interactive way, and providing a much-needed break from the more traditional learning environment.

How can I make math concepts more relatable for kids?

One of the best ways to make math concepts more relatable and understandable for kids is to connect them to everyday situations. When kids can see how the numbers they are working with relate to the world around them, they are more likely to grasp the concept and be able to apply it in other situations.

Parents, Sign Up for Free
Previous article16+ Playful Activities for 1-Year-Old Toddlers to Learn and Have Fun
Next articleTop 15 Fun Learning Activities to Energize and Encourage 3 Year Olds
RELATED ARTICLES
Math for Kids

15 Fun and Effective Ways to Teach Multiplication to Kids

Amy Gill
Amy Gill is a Contributing Editor at SplashLearn. As a former teacher, she likes to write about education reforms, edtech and how to make learning more fun for children.
Explore 8000+ Games and Worksheets
Try for free