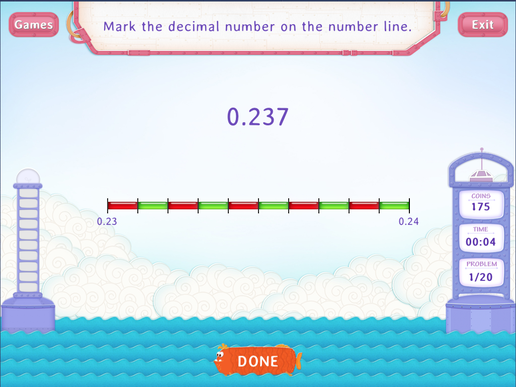 Having learned to relate decimal numbers to fractions with denominators 10 and 100, children can now learn to express decimals in their expanded form and on the number line. This cool decimal game helps children consolidate their understanding of decimals and fractions by representing these numbers in various expanded forms.

- Expand decimals as a sum of fractions with denominators 10 and 100.

- Mark a decimal number on the number line.

- Represent a decimal number as a sum of whole numbers, tenths, hundredths and thousandths.

The ability to represent decimals in their expanded forms will set children up for decimal arithmetic - addition, subtraction, multiplication and division of decimals.