Multiply the fun in your child’s math practice with these interactive and fun multiplication games online. Kids will learn the logic behind the multiplication process by understanding multiplication as a form of repeated addition and blend this learning with decimals & fractions. Get started now!

Introduction to Multiplication Games for Kids

All Multiplication Games for Kids

The various math symbols are used as multiplication operators, such as a cross (x), asterisk (*) or dot (.).

After kids acquire the knowledge of number-sense and counting skills in hundreds, the advanced math operations “multiplication” and “division” are assimilated by fluent addition and subtraction of numbers.

Progressing towards the applicability of addition and subtraction, interactive math games for multiplication are designed to foster math skills based on mental computation and keen observation.

The expected learning outcomes are listed as follows:

The level of complexity in advanced math skill “multiplication” is higher than addition and subtraction. As the process is akin to repeated addition, fluency in number-sense to comprehend numbers in hundreds & thousands along with the “addition” is a pre-requisite. Language comprehension and numerical reasoning in terms of operator-precedence play an important role in grasping the concept of “multiplication” fundamentally.

Fun learning games for SplashLearn aligned with the “common core math standards” curriculum yield an opportunity for kids to sharpen the computation skills during classroom teaching or homeschooling.

Comprehensive worksheets with prolific questions are tailored to extend the purview to math homework help. With an engaging theme-based interface to motivate and apply the complex techniques on numbers, the games substantially boost the confidence in kids to excel in math.

The use of counters to learn multiplication is an effective method to easily relate to the concept. As the counters are used for comprehending basic math skills “addition” and “subtraction”, explicating the process of multiplication as “repeated addition” using counters is highly congenial. 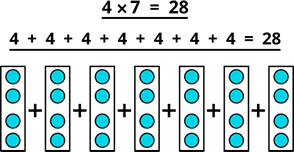 Employing distinct visual models to understand a math operation enable to construct a cognitive model and deepens the learning for the later grades. Base-10 blocks for multiplication relate to the concept very clearly and ease the complexity involved in learning the multiplication of 2-digit numbers.

Following example illustrates the representation of two-numbers using base-10 blocks and evaluating the product by adding the values obtained in each row or the column. 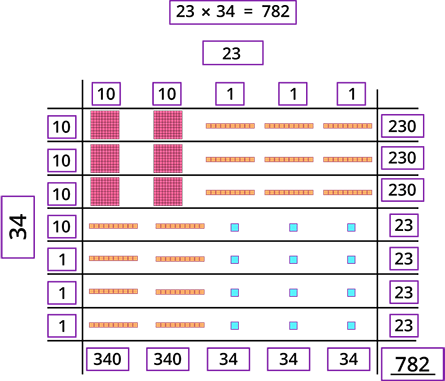 Another visual model to understand the process of multiplication is the area model. The strategy chiefly relates to the geometric figures for translating the entire area as an aggregate of unit area tiles. In order to multiply two numbers, the numbers are referred as the length and breadth of a rectangular shape. The decomposition of numbers further as multiple of 10’s and unit ones reduces the overall complexity. 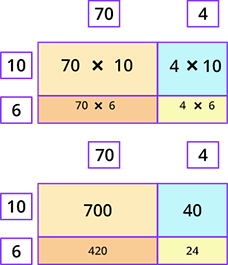 Progression of Multiplication with Grades

In grade 3, the fundamental aspects of multiplication are nurtured by the process of repeated addition. Using number-sense techniques, identifying the numeric elements and framing a math expression or writing a multiplication table is the core skill for the associated level. Also, positioning the math operation “multiplication” as aggregating the elements within the equal-size groups hones the observation skill to proficiently model the problem using abstract concepts.

In grade 4, the distributive property of multiplication is used to reduce the complexity involved in multiplying large numbers. Using the easier methods such as multiplication of single digit numbers and with multiples of 10, large numbers are decomposed into the sum of smaller numbers. Each addend is multiplied by the multiplier separately and the sum of the products is evaluated as the product of the two numbers.

In grade 5, the knowledge acquired in the previous grades is extended to the multiplication of fractions and decimal numbers. Also, the advanced multiplication methods to multiply a two-digit number by a three-digit number are nurtured. The concepts are corroborated with the application areas such as geometry, conversion of metric units and others.

Honoring the math reasoning and tutoring kids through fun-games results in enhanced learning and aptitude development.

The fundamental properties of multiplication are used to solve the complex problems easily. These properties with respect to a random number “a” and “b” are:

The math expressions framed with math symbols and numbers are solved using the above properties for easy computation.

2. Multiplication, Based on Addition Skills 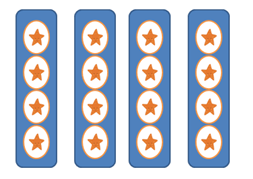 Any valid math-expression with multiplication can be reprised as a “division” equation to evaluate the unknown value.

For example: determine the product of 45 and 32

The math expression will be:

The equation can be written as follows with a division operator: 1440/45 =?

Using multiplication tables, kids can memorize the product of single-digit and two-digit numbers with other numbers for quick math.

4. Multiplication Based On the Multiplier

The knowledge of number-sense, place-value system and multiples of 10 is conducive in employing quick math tricks for word problems and riddles. The multiplication of fractions and decimal numbers insists on the concept to multiply the numbers and evaluate the correct place of the decimal point along with fluency in “division” skills.

The concept of “multiplication” develop in kids during the formative years with addition and subtraction. The basic math skill is applied in visualizing the model as a case of grouping and counting to evaluate the product. With significant contribution in the allied fields such as data interpretation, measurement of physical quantities, the concept is highly useful in comprehending math associated with science and physics.