Rulers play an integral part in understanding measurement. SplashLearn’s interactive ruler games help kids drag objects on the ruler to measure their lengths. They also learn to compare lengths on a ruler in both metric and customary units. A variety of real-world objects keep children engaged!

Everyday life involves a lot of estimated measurements. How long will it take to reach the school from home is an estimated measure of time that requires almost every day. Another example is the estimated amount of money required for shopping. An estimated measurement of length is the width of a mud puddle when you cross it by jumping over it. So, measurement is an integral part of one’s everyday life. What is a measure? One can measure time, weight, length, capacity etc. Time can be measured in seconds, minutes and hours. For measuring weights, capacity, and length, there are mainly two types of units: metric units and customary units. Metric units for weight include milligram, gram, kilogram etc while customary units are ounces, pound, ton etc. Widely used units for temperature measurement are Fahrenheit and Degree Celcius. Metric unit for length includes millimeter, centimeter, meter, kilometer etc. Customary units for length include inches, feet, yards, miles etc. Capacity can also be measured and the customary units are ounces, pints, cups, quarts, gallon etc. Customary units are widely used in the United States of America.

Lengths are more important than many other measurements in the fields of geometry, technical drawing, civil engineering etc. Rulers are mainly used for three purposes: to measure, to draw straight lines and as a straight guide for cutting with a blade.

There are different types of rulers like desk rulers or scale rulers, digital rulers etc. Flexi rulers are similar to scale rulers, but they can also be used to make wavy lines. Triangular rulers are used for drawing horizontal, vertical and inclined lines. A protractor or conveyor is used for measuring angles. Triangular scale rulers or scalimeters have different units on each of the sides. In higher and applied mathematics, T rulers are used in technical drawings. A ruler software program can be used to measure pixels on a computer screen or mobile phone. These programs are also known as screen rulers.

SplashLearn is one of best math websites for students that provide a well-balanced learning program based on math common core standards. It has worksheets for preschoolers through grade 5. The topic “rulers” is handled with a large number of pictorial examples and activities.

Learning About Rulers with Math Manipulatives and Activities

Kids can be provided with various objects for comparative analysis like two boxes of remarkably different sizes can be given and can be asked to choose the bigger one. Two sticks of different lengths can be given to choosing the smaller one etc. Preschool learning games in this topic with colorful pictures would create interest in kids. Ordering three similar objects according to their sizes can be given at the next level as problem solving activities. Small measuring sticks of equal lengths can be given to line up and actually find the length of an object. Such interactive games for kids can be performed as group activities. The activities for how to read measurements on a ruler can be introduced in the next level. A first-hand experience of measuring the things around them using actual rulers would be an interesting activity for kids. They should be introduced ruler for measuring objects using different types of metric rulers and inch rulers.

There are many online measuring tapes available which can be resized to a real size ruler. By doing this, these can be made to printable rulers. Printable centimeter rulers or printable mm rulers can be used while assigning group activities of measuring objects in a class.

Online math games for kids for measuring the lengths of a given object helps to get practice in estimating and measuring lengths.

Math online games for measuring are available in metric and customary units. The difficulty level can be adjusted by choosing the appropriate units as well as the division of each whole.

In kindergarten, kids learn about various measurable attributes of a single object. For example, given a rectangular box, kids learn that the dimensions - height, width, and length -  of the box can be measured. Another measurable attribute of the box is the weight of the box. They learn about the volume of the box as the things that can be kept inside the box. Note that they don’t actually measure any of these quantities. Another measurement tactic that sows the base for the actual measurement procedure is the comparison of two objects. This is assessed using the terminologies like more of/less of, longer/shorter, lighter/heavier etc.

In grade 1 they can order three or more similar objects according to their measurable attributes such as length, height, weight etc. Kids learn to measure the length of an object by laying multiple copies of a shorter object, end to end. This lays a basic foundation for rulers.

Different types of measuring devices like scale rulers, meter sticks, yardsticks,  and measuring tapes are introduced in grade 2. Ruler reading is taught using a lot of pictorial examples. Estimation is another technique discussed at this level. Word problems related to the addition and subtraction of lengths reinforces the concepts. At this level, all the measurements are strictly constrained to the whole numbers.

Fourth grade math curriculum discusses the relationship between various units within the same system of units. They apply this knowledge for the math conversions of larger numbers in fifth grade math.

Comparison as Foundation for Measurement

The concept of length is introduced by comparing two objects of different sizes. 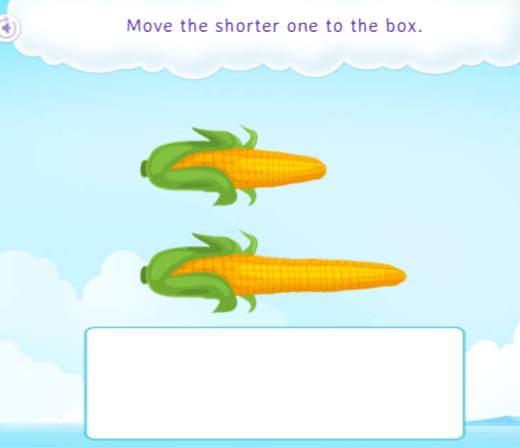 Once children are comfortable with the concept as well as the vocabulary of longer/shorter, more of/ less of etc, they can compare and arrange three or more similar objects. 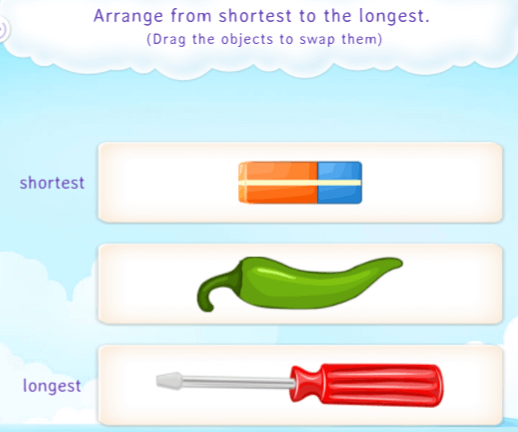 The basic method of measuring is introduced at this stage using multiple copies of a shorter object. For example, in the below picture the length of the pencil is measured using the number of coins. 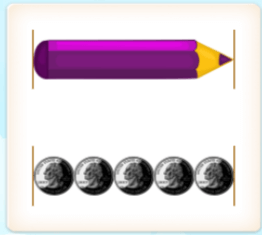 That is, the length of the pencil is equal to that of 5 coins. One needs to be careful that the shorter object should be lined up properly with the longer object. There shouldn’t be any gap or overlap within the measuring objects. This lays the foundation for the ruler measurements.

SplashLearn has a good number of kindergarten workbooks and worksheets for first grade available for practice on this topic.

Rulers are introduced along with other measuring devices like yardsticks and measuring tapes.

One of the most common rulers at this level is a 12-inch ruler.

This can be used to measure various objects that are available in the classroom such as the length of the table, bench, duster etc.

When it comes to metric measurements, the ruler in cm and ruler in mm are most common.

In general, one side of the rulers used at this level will be marked in centimeters and the other side in inch measurements.

Kids are taught how to read a ruler initially using pictures of objects along with a digital ruler.

One of the most important things is to line up the initial mark of the ruler with the tip of the object to be measured. That is, the length of the below crayon is not 18 cm as the bottom end of the crayon doesn’t line up with the zero of the ruler.

To reinforce this concept of reading the measurements, a comparison of the lengths of two objects are also discussed at this level. 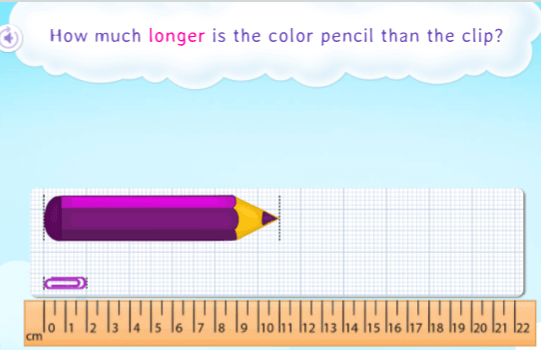 Measuring an object with the suitable unit is something that requires an amount of logical thinking. Consider the length of the rectangle below. It is almost equal to or a little less than 13 cm whereas exactly equal to 5 inches. In this case measuring the length using inches gives you more accurate answer.

The 2nd grade math games and activities and math assessment tests, dealing with the ruler reading and ruler measurements are available in SplashLearn.

Measuring Halves and Fourths of a Whole on Ruler

In the next level, more accurate rulers marking halves and quarters are introduced to kids. Children have a basic knowledge of fractions which can be applied here. They already know that two halves or four-fourths make a whole. Children have already learned how to plot or read fractions on a number line. This would help them relate the ruler markings with the number line.

When measurements on a ruler are till the half of a whole, each whole is equally divided into two. In an online 12 inch ruler, the first mark after 0 would be at ½, the second one at 1, the fourth one at 1½  and so on. There would be 24 marks on the 12-inch ruler.

When measurements on a ruler are till the quarter of a whole, each whole is equally divided into four. In a one inch ruler, the first mark after 0 would be at ¼, the second one at ½, the third one at ¾, and the fourth one at 1. In a similar way, each whole is divided into 4.

The below ruler measures halves and fourths of an inch:

Usually, 1/4 on a ruler is marked with equal heights but shorter than the ½ mark.

When it comes to metric unit rulers, a unit measurement, a centimeter, would be sub-divided into 10 small lines, each measuring one millimeter.

Worksheets for 3rd graders available at SplashLearn for measuring objects using a digital ruler starts with easier ones that measure to the nearest inch. Gradually it advances to measure nearest to the halves and quarters.

An estimation is a reasonably close guess or approximation of an object.

They also learn which measure and unit to be used for an accurate measurement of a given object. 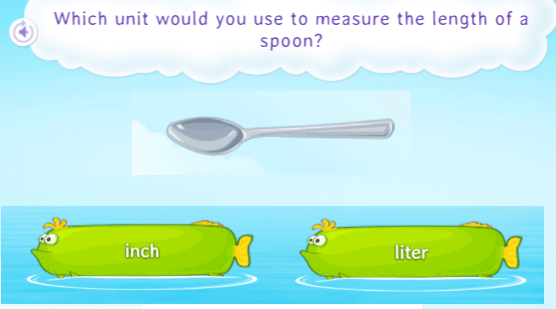 Kids learn about the estimated length of the body parts of humans such as the arm is about a foot long, arm span is about a meter etc. This helps them get a clearer picture of the length than using the exact measurements with the ruler.

By then kids have an idea about various units and how much do they measure. So, kids can apply this knowledge on estimating the length of the objects that they see around them. 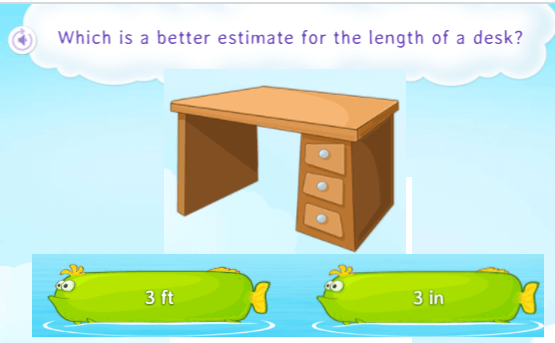 The estimation of lengths in metric units as well as customary units are dealt in separate sections in SplashLearn with a wide range of self-explanatory math problems.

Relating Addition and Subtraction to Length

Charlie has a string of length 20 m, Joseph has a string 5 m longer than Charlie. What is the total length of the both the strings?

Now to find the total length of the two strings, the lengths 20 m and 25 m need to be added.

Therefore, the total length of the two strings is 45 m.

These type of word problems related to addition and subtraction of lengths reinforces the concept of measurement.

Kids learn to relate the units of lengths within the customary or metric system of units. 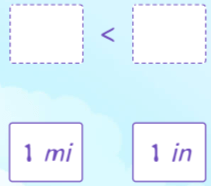 They learn to express the measurement in a larger unit in terms of smaller units. That is, they understand that 1 foot is equivalent to 12 inches. Thus, 1 foot is 12 times as long as 1 inch. Some calculations are done as simple mental math problems whereas some need a good amount of calculation.

At this level, kids are already comfortable with multiplying and dividing decimals. So, they can handle measurement conversions involving decimals too. The knowledge about simple divisions should suffice for this. Customary or standard to metric measurements conversions are discussed only in higher grades.

Further, they apply this knowledge in the word problems related to the conversion of units.