Fourth and fifth graders take on the amazing world of algebra using their prior knowledge of addition, subtraction, and other operations. SplashLearn's fun online algebra games build an understanding of factors and multiples and help children identify number patterns within a sequence.

Games for Kids on Numerical Expressions

Factors and Multiples Games for Kids

All Algebra Games for Kids

It is a branch of mathematics which deals with symbols, letters of the alphabet, to represent numbers or quantities and express general relationships that hold for all members of a specified set.

Children in while doing grade 4 and grade 5 math learn to solve multiply or divide word problems involving multiplicative comparison, by using math equations with symbols for representing an unknown number in a math problem.

In these grades math children learn to translate comparative situations into equations with an unknown and solve. In a multiplicative comparison, the underlying question is what factor would multiply one quantity in order to result in the other.

• Additive comparisons focus on the difference between two quantities. For example, Michelle has 5 pens in her pencil box and Becky has 3 pencils. How many more does Michelle has?

• Multiplicative comparisons focus on comparing two quantities by showing that one quantity is a specified number of times larger or smaller than the other. For example, Dona ran 3 miles. Stefanie ran 5 times as many miles as Dona. How many miles did Stefanie run?

Solve multistep word problems posed with whole numbers and having whole-number answers using the four operations, including problems in which remainders must be interpreted.

For example, Your class is collecting bottled water for a service project. The goal is to collect 300 bottles of water. On the first

container. About how many bottles of water still need to be collected?

• Remain as a left over

• Partitioned into fractions or decimals

• Increase the whole number answer up one

• Round to the nearest whole number for an approximate result

For example, Mary had 44 pencils. Six pencils fit into each of her pencil pouches. How many pouches could she fill and how many pencils would she have left?

Mary can fill 7 pouches and have 2 left over.

What are factors?  Factors are numbers we can multiply together to get another number: Example: 2 and 3 are factors of 6, because 2 × 3 = 6.

Students should understand the process of finding factor pairs so they can do this for any number 1 -100.

One can use a factor tree to find factors of 2 digit numbers.

The factorization gets complete when the numbers at the end are prime numbers.

A number that can be divided exactly by another number is a multiple of that number. Multiples can be thought of as the result of skip counting by each of the factors. Start at 0 and count up in steps of the same size and then one can get the multiples of that number. For example, finding multiples of 2

Which of the following numbers in the given list are multiples of 25 but not 50? 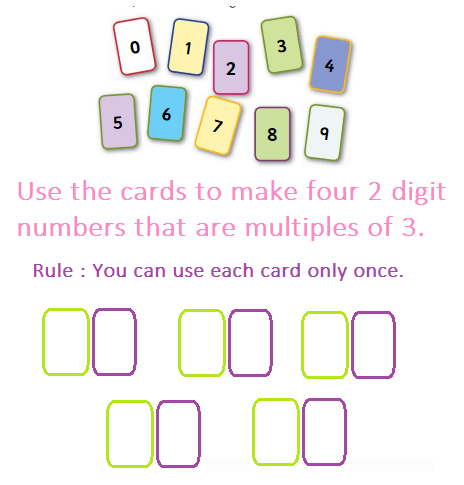 A prime number is a number greater than 1 that has only 2 factors, 1 and itself. Composite numbers have more than 2 factors.

An algebraic expression must have only one value. To get to that one must follow the order of operations.

Step 1: Solve the operations given in the parenthesis, brackets, braces etc.

Step 2: Do all the multiplications and divisions from left to write

Step 3: Do all the additions and subtractions from left to write

Solve the given algebraic expression using the algebraic rules defined above.

Step 2:  do the multiplication first within the brackets from left to right; 2 x 6 = 12

This educational algebra quiz is in alignment with the algebra 1 common core curriculum.

Children use the algebraic properties and algebra rules to solve basic algebraic equations given and also learn to write algebraic expressions.

Perform the simple math operation and fill in the green circles with the solutions. One solution becomes the operand of the next math problem.

This is a simple math puzzle laying the foundation of elementary algebra for grade 4 math.

Follow the proper instructions and solve the simple math problems defined below to find the correct solution.

This funbrain math puzzle can also be a part of pre algebra worksheets for the fourth graders before beginning algebra.

3. In Search of the Math Symbol – Learn Algebra with this Educational Math Game for Grade 5

For example , for the algebra equations

We have used the math symbols such as =, x and –

Complete the given algebraic expressions by adding appropriate math symbol keeping in mind the algebra rules and the order of operations.

The following algebra activity is defined on number pattern with rules. The rules of the mathematical instructions are provided in the figure. The child follows the instructions to get to the answer.

a number or shape pattern that follows a given rule. Identify apparent features of the pattern that were not explicit in the rule itself. 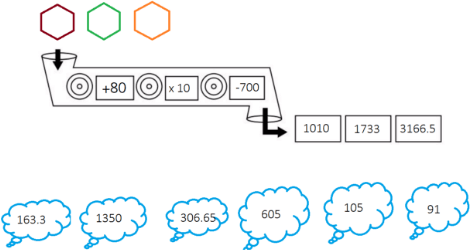 In this math algebra word problem, children try to find the nearest multiples of the numbers given and then use appropriate mathematical operation such as subtraction (in this case) to get to the result. The child is expected to find two set of result for each problem.

The child uses the gained mathematical proficiency of evaluating factors and multiples of numbers to solve the basic algebra problems here.

Defining algebra problem: Six children are working together in an art and craft class. They are given the supplies by their class teacher. These supplies have to be shared equally amongst the six. Solve the algebra puzzle to get the answer.

Find the missing number that goes in the circle to complete the math puzzle. 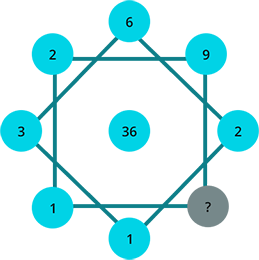 The Number Patterns series are designed to extend and challenge young mathematicians. The understanding and exploration of number patterns is essential in developing years to prepare children for more challenging concepts associated with learning Algebra. The child can learn to write the basic algebraic expressions with the help of number patterns.

This is in alignment with the common core curriculum which guides to generate a number or shape pattern that follows a given rule. Identify apparent features of the pattern that were not explicit in the rule itself.

In this math activity, children will be investigating patterns.

Form a triangle and the number of sticks required to make pattern 5?

One can also work out on the algebraic expression of the number pattern to get to the answer.

From the above we can use deduction technique to write an algebraic expression:

Try to find an algebraic expression for the above and then get to drawing the square 3.