Introduction to Subtraction Games for Kids

Games for Kids on Subtraction without Regrouping

Subtraction with Regrouping Games for Kids

Games for Kids on Multi-Digit Subtraction

All Subtraction Games for Kids

Subtraction means you are taking away something from a number of things or group of things. A subtraction equation looks like this:

The difference is the result of the subtraction.

Subtraction is taught after the student develops a basic understanding of addition. There is a strong link between addition and subtraction. Subtraction can be performed to find out how much should be added to the smaller number to get the larger number. The equation 6 – 4 = 2 can also be written as 4 + 2 = 6. In other words, the subtrahend and the difference in the subtraction equation become the addends; and the minuend becomes the sum in the addition equation.

Besides teaching subtraction through textbooks, it can be taught through math games and through manipulatives.

1. Learning:  Mathematics is all about practicing the newly acquired skills and revisiting already introduced skills. Math games have the ability to induce much more practice in kids than the traditional methods of teachings have.  While playing fun subtraction games, the kids don’t mind repeating some procedures or facts over and over. This helps them master subtraction concepts relatively faster.

2. Math skills: The ability to subtract mentally is a skill. Not much focus is put on this while teaching through traditional methods. Math games stress kids to do math in their heads. In classroom teachings, the kids have very few opportunities to check or justify their work. Also, math games entice players to challenge opponents’ unjustifiable moves. This compels kids to prove or convince the opponent their move through their conceptual understanding.  Hence, math games help in developing mathematical communication which is the need of the hour.

3. Engagement: One of the most important reasons to introduce subtraction learning games in Mathematical teachings is the excitement and enthusiasm it brings in to the kids. Subtraction games like subtraction fact games enable kids to experience success and satisfaction and thereby, develop confidence in their newly acquired skills.

1. Counters: Counters are one of the most useful math manipulatives in understanding base math. This method is particularly useful in understanding basic subtraction. It provides the student visual understanding of subtracting smaller numbers. This primitive step can set the foundation for learning subtraction as a simple mathematics process and further enhance their ability to subtract larger numbers as well.

For example, to subtract 3 from 7, the student should place 7 counters on a table, take away 3 from them and then count the remaining number of counters to find the difference.

Counters can be effectively used for performing subtraction within 20. Using counters to solve subtraction problems involving bigger numbers can make it cumbersome and time-consuming. The following methods can help resolve this limitation of the counter method. 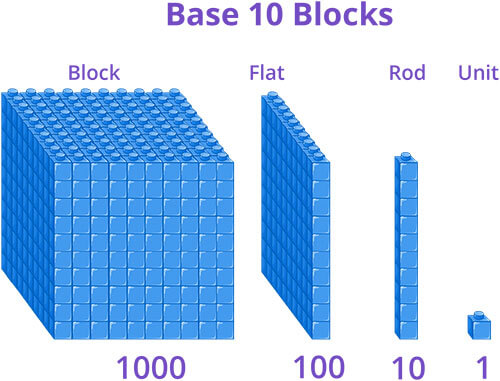 The base 10 blocks make understanding of subtraction with regrouping really easy. It involves trading some of the bigger blocks with blocks of smaller value.

Progression of Subtraction with Grades

In Grade 1, the kids are taught to count back on the number line to find the difference between two numbers.  At this level, kids are expected to perform subtraction within 10 using their counting skills. The kids are also expected to understand the relationship between addition and subtraction. The knowledge of place value system enables kids to subtract a multiple of 10 from another.

With ample practice and application of different strategies, kids are able to develop a deeper understanding to perform subtraction of fractions in Grade 4 and subtraction of decimals in Grade 5.

Subtraction based on Counting Skills

For example:  Write the equation for the given sentence.

Start from 5. Move 3 units to the left. The answer is the number you end up at.

Subtracting with regrouping:  The kids use their knowledge of breaking hundreds into tens and tens into ones to find the difference between two numbers.

Subtraction Based on Number and Operations in Base Ten

A clear understanding of place value system is required for performing subtraction involving bigger numbers. The student needs to understand that hundreds should be subtracted from hundreds, tens from tens and ones from ones.

For example: Find the unknown number in the following equations.

Subtraction using mental strategies (subtraction within 20): The student at this stage are expected to know from memory all sums of one digit numbers. This enables them to find the difference within 20 by applying their understanding of the relation between addition and subtraction.