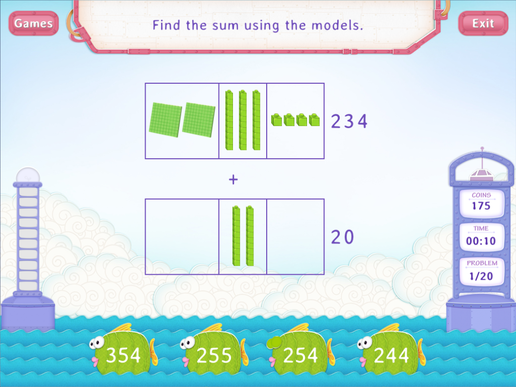 Subtract a 2 digit number from a 3 digit number without regrouping. In this grade, subtracting by using the standard algorithm should not be the focus. Students should instead practice subtraction based on the concept of place value. For example, to subtract a 2 digit number from a 3 digit number, they can subtract ones from ones and tens from tens. To understand how this works, they should look at the expanded forms of numbers. For example, 363 - 41 is the same as (300 + 60 + 3) - (40 + 1), which leads to 300 + (60-40) + (3-1). It is important for the students to know how a particular method works, rather than just using the method. Subtracting using place concept and value concept will help students make sense of the standard algorithm, when they use it more and more in the higher grades.

2.NBT.7Add and subtract within 1000, using concrete models or drawings and strategies based on place value, properties of operations, and/or the relationship between addition and subtraction; relate the strategy to a written method. Understand that in adding or subtracting three-digit numbers, one adds or subtracts hundreds and hundreds, tens and tens, ones and ones; and sometimes it is necessary to compose or decompose tens or hundreds.