Round to the Nearest Hundred 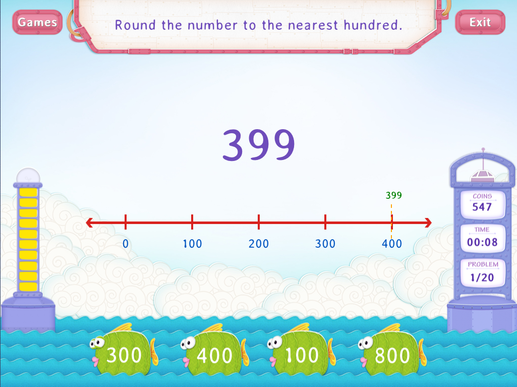 Rounding numbers is a skill that is imperative for children to pick up in order to learn estimation. Third graders started with this skill by learning to round numbers to the nearest ten. The next step is to learn to round up to the nearest hundred. This helps them arrive at numbers that are easier to deal with when performing addition, subtraction, multiplication, and division with similar numbers.

- Begin by identifying the two hundreds between which each number lies using a number line.

- Proceed to identify the nearest hundred to a given number both with and without the help of a number line.

- Also learn to identify the number from a group of numbers that rounds to a given hundred.

There is something satisfying about round numbers. They are easy to remember and simple to process. When planning a big party, people usually plan for 100 guests than for 99. Similarly, it is easier to talk of the number of employees in an organization in multiples of 100.

Now that third graders know how to round up to the nearest ten and nearest hundred, they are ready to fluently add and subtract within 1000 using their knowledge of estimation and the relationship between addition and subtraction.

Do you know you can use the rounding method to check answers to math problems in your worksheets? Suppose you have to divide 594 by 2. Round up 594 to 600 and divide by 2. You now know your answer is close to 300!