Kids in Grade 5 move ahead to multiplying numbers with multiples of 10 & develop fluency in standard multiplication algorithms. This prepares them for multiplication of fractions & decimals. SplashLearn has a range of multiplication games & a fun approach to create an enriching learning experience.

Give your child food for the mind with this game on multiplication. Concepts like multiplication can be confusing for kids, but with practice they can gradually get more comfortable. The game is about multiplying numbers by tens using the place value understanding.

Kids often develop misconceptions about concepts in mathematics, including multiplication. It is important to help them get over those misconceptions. The game requires students to work with a set of problems on multiplication and use their conceptual understanding to find the related facts. Student...

Multiply by Multiple of 10

Here your young mathematician will practice more on the concepts of multiplication. Students will multiply by multiples of 10 in this game. Students will drag and drop the items at the correct places to solve the problems.

All Multiplication Games for 5th Graders

Struggles with multiplication can be easily overcome if students practice the concept in a fun and engaging way! The game requires students to complete a set of challenging tasks and the students learn the concept of multiplication in the process. This set of problems deals with two 2-digit numbers;...

This game consists of smartly designed tasks to help your young mathematician practice more on the concepts of multiplication. The student will multiply two 2-digit numbers using place value understanding in this game. Students will multiply numbers in vertical arrangements.

Identify the Missing Digit in the Product

Nudge your child towards mastery in multiplication with this super fun game. The game gives students plenty of opportunities to work with problems based on multiplication. They are encouraged to apply their mathematical knowledge to find the missing number in the product. Students will multiply numb...

The Product of Two-Digit Numbers

Building a strong foundation in multiplication is an important step in helping your child become proficient and confident. The game has a set of problems logically crafted for your child so that they gain fluency in multiplication. This game will nudge your fifth grader towards mastery and develop t...

Boost your child's understanding of multiplication with this game. The game provides learners with opportunities to work on a set of well-designed problems, enabling them to practice more on the concepts of multiplication. Learners will multiply numbers in vertical arrangements.

Determine the Missing Digit in the Product

The game ensures active student participation through which your child will gain fluency in multiplication. The student will multiply 3-digit and 2-digit numbers in this game. Students will multiply numbers in vertical arrangements.

Your child will practice multiplication in this fun game. Students' struggle with multiplication is often attributed to a lack of adequate practice. Timely and effective practice with a focus on fundamentals will help your child become more proficient in multiplication. This game invites students to...

Struggles with multiplication can be easily overcome if students practice the concept in a fun and engaging way! The game is about solving a set of problems of varying difficulty levels and by doing so, your young mathematician will practice the previously learned concepts of multiplication. Your fi...

Q1: How do we multiply decimals?

Q2: What are some games on multiplication of numbers?

Ans: There are many grade appropriate games available for students on SplashLearn website which are suitable to apply the understanding of multiplication. To play fun games on multiplication, visit SplashLearn page and select your grade or find "multiplication games" in the tab "Math Games by Topics"; then your are ready to have fun while applying your knowledge.

Ans: To multiply a decimal number by 10s, just move the decimal point in the first number towards the right after counting 0s in 10s.

Q5: How can we multiply numbers using area model?

Ans: To use area model, write both the multiplier and the multiplicand in expanded form. Place value of each digit in expanded form notation as the dimension of the rectangle on either side. Find the area of each rectangle using the formula length x width. Add all the areas of rectangles in the model to find the product.

Multiplication properties can also be used as strategies to multiply and divide. Examples:

This is a 2 or more-players multiplication facts games in which there are different BINGO sheets and a problem deck containing multiple multiplication problems. Bingo sheets have random numbers written in a 5 X 5 multiplication grid. 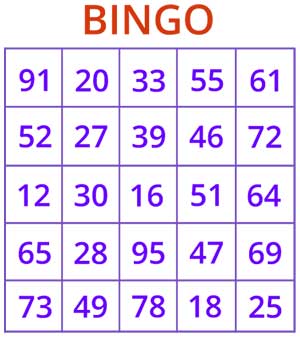 Each participant gets a BINGO sheet. Shuffle the problem deck and turn out one problem. Kids should solve the problem in their heads, then check their sheet to see if the answer is there. When a child has the answer her sheet, she can draw an "X" over it or place a counter on the correct box. The first player to have five correct answers in a row vertically, horizontally, or diagonally shouts out ‘BINGO’ and wins the game.

The rules of times tables snap are simple. There are two sets of cards, one containing the ‘times tables questions’, and the other containing the ‘answers’. At the start of the game, the cards should be shuffled, and distributed evenly to the players. The players keep their cards face down in a stack. 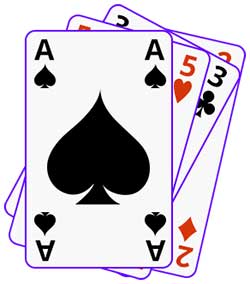 A deck of cards is needed to play this game. Take out 2 random cards from the deck. (example 2 and 4), Multiply the numbers (example: 2 x 4 = 8). The product is the number of points you keep. Repeat 4 more times. The player that has the most points after 5 turns win.

It is a board game with the objective to reach the finish point. The game has varied note cards of multiplication facts.  The first player gets to study the note card with five facts on it for 30 seconds. After which player 2 will quiz the first player. If player 1 answers three or more problems correct, they can roll the dice and move the game piece the number shown on the dice. If two or less are answered correct, player 2 rolls the dice and moves. These steps are repeated till one of the players reaches the finish point.

The materials required to play this game are a game board, game pieces, and 2 dice. The objective is to be the first one to reach the end of the game board. The player who starts first rolls the two dice and multiplies the two numbers that appear (Example: Roll 4 on one dice and 5 on the other. That would equal 20.) The number of spaces moved is determined by the chart provided with the game. The second player repeats the same. Continue until a player reaches the end of the game board.

Building on 4th-grade math multiplication, students begin by decomposing numbers into base ten units in order to find products of single-digit by multi-digit numbers. Students use the distributive property and multiply using number disks to model. Practice with number disks is used for multi digit multiplication problems with recordings as partial products. Finally, the partial products method, the standard algorithm, and the area model are compared and connected by the distributive property

Let us use the number disk method to find the product of 3 x 10. Suppose there is a group of 3 ones. Now multiply 3 ones by ten i.e. just move each disk over to the tens place and get 3 tens. Draw an arrow indicating that the disks shift one place to the left, label it × 10 and write 3 ones × 10 = 3 tens. How to multiply the result further by 10? Do the same thing again. Move them one more place into the hundreds and get 3 hundreds. 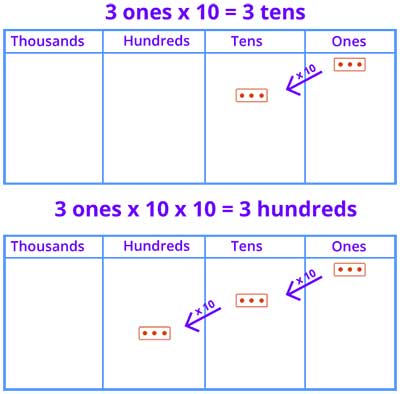 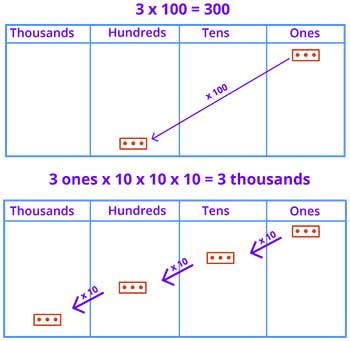 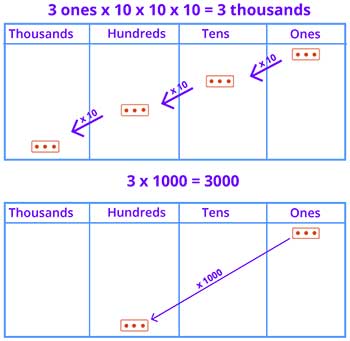 Number disks can also be used to represent products when multiplying by a two-digit number. For example Solve 15 × 10

This model can be used to represent two-digit multiplication problems and find the solution through easy visual representation. Let us see how to multiply 10 by a two-digit multiple of 10. Example: Solve 50 × 40 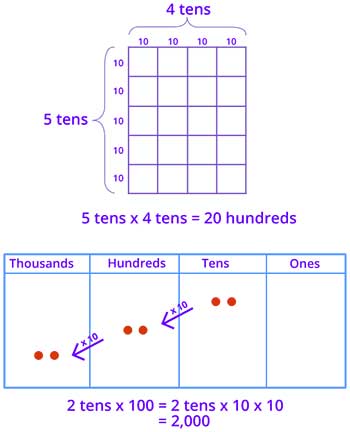 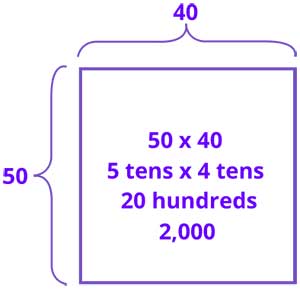 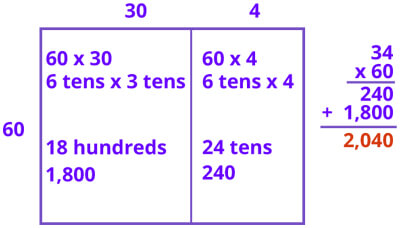 Other ways to write the expression are:

Next let kids see that they can conceive the problem as 40 times 22, without breaking the process into the two steps of multiplying by 4 and 10 in whatever order as below: 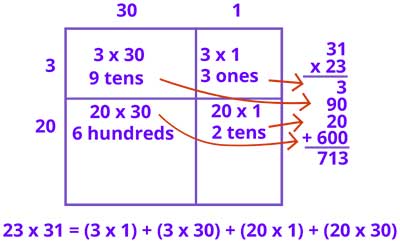 Partial product method can be used to Multiply two-digit by two-digit numbers. This method pre-requires the area model. To find the product of 23 and 31 first draw an area model to represent 23 × 31 and then write the expressions that solve for the area of each rectangle. The area of each rectangle gives partial products. Summation of all partial products yields the final area. In this example, the area model gives 4 smaller rectangles with partial areas as- 9 tens, 3 ones, 6 hundreds and 2 tens. The sum is 6 hundreds, 11 tens and 3 ones. 11 tens can be regrouped as 1 hundred and 1 tens. Hence, the final sum will be 713. That means that 23 × 31 = 713.