Q1: How do you multiply fractions and mixed numbers?

Q2: How to teach multiplying fractions to fifth graders?

Q3: How can kids learn to multiply fractions using grids?

As compared to adding and subtracting fractions, children find the rules for multiplying fractions easier to remember. Though they are easier for computation, it is important to understand the concept using good manipulatives, fraction games, and real-world examples.

Math manipulatives help children understand a mathematical concept through manipulation. Some of the manipulatives that can be used for fractional multiplication are discussed below.

, the whole is divided into 5 equal parts and 2 of them are shaded. Similarly, for the fraction

, the whole is divided into 3 equal parts and 2 of them are shaded.

The product can be shown as: 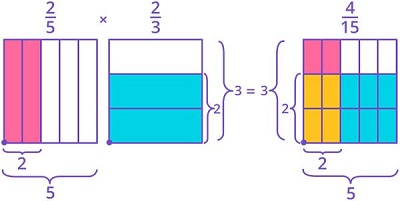 Relational Rods: Relational Rods are rectangular rods with related lengths. A set of relational rods has 10 different colored rods, starting from one whole, that is, ten-tenth to one-tenth. Each set contains 70 to 80 rods. 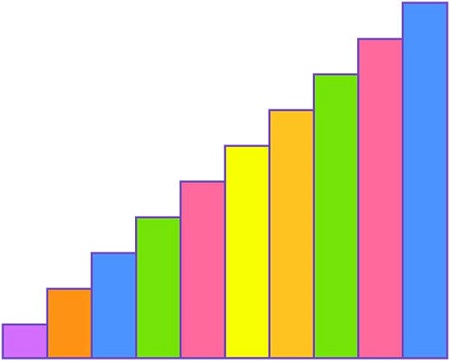 . This is precisely same as three-fifth of one-half.

To find the product using relational rods first align the rod that represents one-half with a set of rods whose 5 blocks would be equivalent to the one-half rod.

In other words, 3 one-tenths is equivalent to three-fifth of one-half. 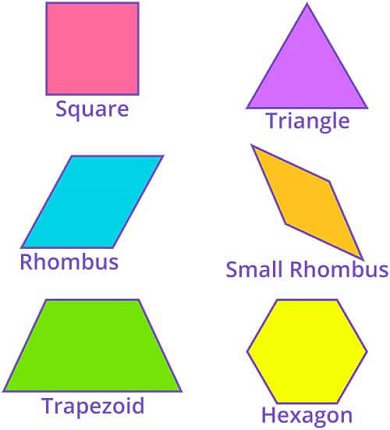 Fractional Die with Timer: No. Of Players 3-4

A factional die can be thrown twice by each player with a timer on. The time taken for finding the product of the fractions thrown shall be noted. In each round whoever finishes within the least time wins the round. Different fractional dice can be used for adjusting the difficulty levels.

Fractional Race: No. Of Players 1

Digital racing games for kids can be connected to multiplying fractions. As the race progresses ids will be given fractional multiplication questions where a correct response would provide points that accelerate the race. An incorrect response may result in speeding down in the game.

Passing the Fractional Product Parcel: No. Of Players 6-8, with a supervisor

Children can be made to sit in a circle. One should start with a very simple fraction, say

. The child sitting next to can choose a fraction of his/her choice and find the product. The supervisor can make sure that the child chooses another simple fraction and the product is correct. The product is passed on to the next child. The round continues till a child gives an incorrect answer which will be identified by the supervisor and the child goes out of the game. The next child can start the next round with a new fraction. It is advised to use a fraction calculator for verification.

Grade 5 fractional multiplication skills are an extension of the previous year’s skill.

In grade 4, children learn to multiply fractions by whole numbers as repeated addition. In grade 5 they look at it from a different angle altogether.

Consider the situation below:

Harry orders fruits for his family. Every

of his order is oranges. If he orders 5 kilograms of fruits a day, what would be the weight of oranges he ordered?

Here, the child needs to find

One way of looking at it is, if 5 kg of fruits (5 wholes) are equally divided into 10 parts then 3 parts of it are oranges.

When 5 wholes are divided equally into 10, each whole has 2 equal parts. 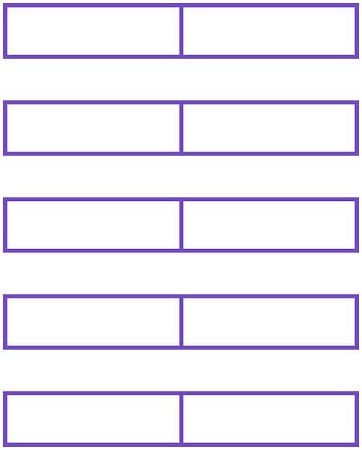 When this is multiplied by 3, three parts out of 10 is shaded. 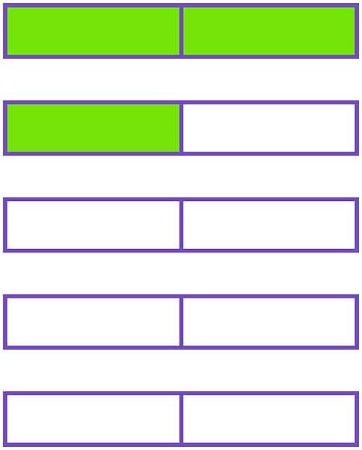 This is equivalent to

Another way of looking at it is dividing   3

Then each part would be

Consider another example of multiplying a whole number and a fraction,

Convert the fraction to mixed number.

of her holiday homework when she realized that she had done a mistake. So, before her mom checks it, she decided to correct it. But by the time her mom came for checking she had corrected only

th of her mistakes. Then, what part of the holiday homework is in the corrected form?

of her holiday homework is done with mistakes and

is corrected. In other words, corrected part of the homework is

How to multiply fractions?

th of the holiday homework is in the corrected form.

Using area models, this can be shown as: 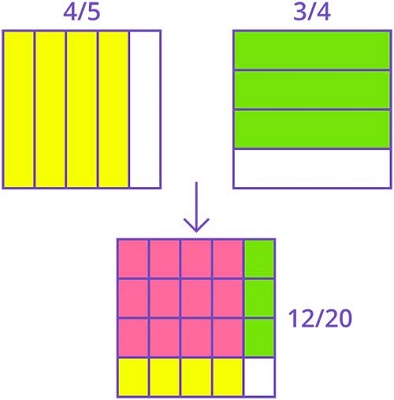 Multiplying Fractions as Area of a Rectangle of Fractional Sides

Consider a square of unit side length. The unit side length can be divided equally into any number of parts. Let us consider it with 10. That is, each side of the square is divided into 10 equal parts, dividing the whole square into a ten by ten grid as shown below. 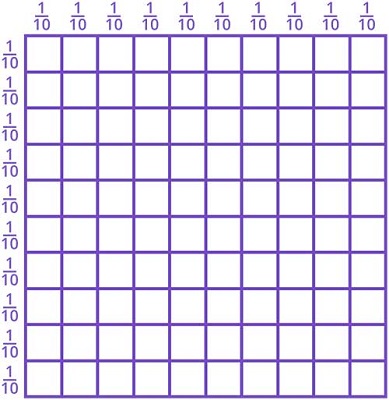 Now consider the shaded rectangle with side lengths 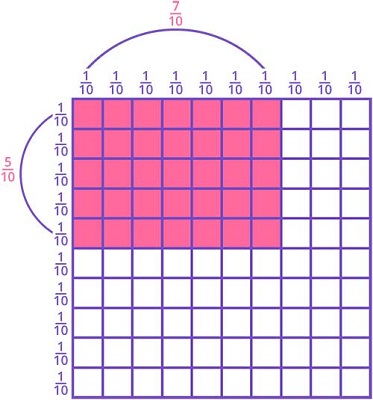 The area of the rectangle can be calculated as the product of the lengths of the sides. That is,

Thus, the area of the shaded rectangle is

Now, the area can also be calculated by adding the areas of the small shaded squares in the grid.

and each square has an area of

There are 35 such shaded squares in the rectangle. So, the area of the shaded rectangle is

Thus, the areas found in both the ways are same.

can be written as a mixed fraction as

If both multiplicand and multiplier are mixed numbers, the procedure is similar.

Convert the fraction to a mixed number.

A rectangular swimming pool of dimension

feet has a uniform pathway of width 2 ft around it. What is the area of the pool including the pathway? 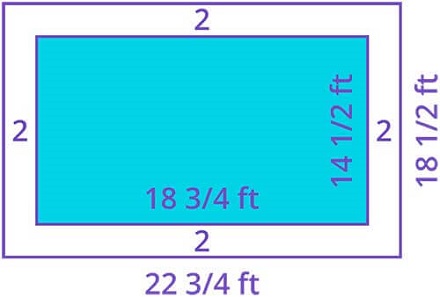 The child can use a multiplying mixed fractions calculator for finding the product.

While simplifying fractions make sure to follow the math order of operations for the computations. Converting mixed numbers to improper fractions worksheet available in SplashLearn can give you good practice for the topic.

Find the product of the two fractions to find the required area.

These two are complex fractions, so it is advised to use any multiplying fractions calculator for accuracy.

For such complex fractions, writing the numerator as a sum of a multiplier of the denominator and another number is a difficult task.

Therefore, the area of the rectangular swimming pool including the uniform pathway around is

Look at the two pictures below. 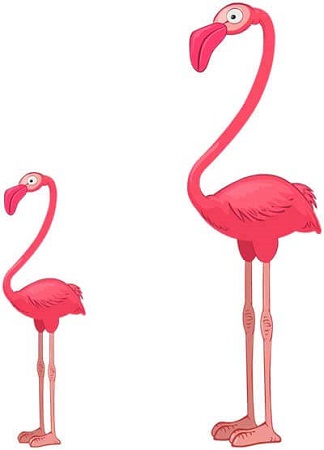 Now, let us come to the mathematics side of scaling.

What happens when a whole number is multiplied by 1?

What about a number greater than 1?

Each whole of 3 gets doubled or scaled up by 2, and this adds up to 6. So, a whole number gets scaled up when multiplied by a number greater than 1.

When it comes to the multiplication of fractions, the rule is the same.

A fraction multiplied by a number greater than 1 results in scaling up and thus the product would be greater than the fraction.

A fraction multiplied by a number between 0 and 1 results in scaling down and the product would be less than the fraction.

The multiplication of a fraction by a number equivalent to 1 doesn’t make any change in the fraction.

Using the above facts, it is possible to compare the multiplicand, multiplier and the product without actually performing the multiplication.

A fraction is multiplied by another fraction equivalent to 1. Thus, the value of the multiplicand does not change. So,

The number 4 is multiplied by a fraction less than 1. So, the product would be a number less than 4. Thus,

The number 567 is multiplied by a fraction greater than 1. So, the product would be a number greater than 567. Thus,

Practice Multiply fraction by a whole