Kids in Grade 5 apply their prior knowledge to divide fractions and decimals and practice division of four-digit numbers with two-digit numbers. SplashLearn’s online division games for Grade 5 teach children how to estimate quotients, identify patterns when dividing decimal numbers and a lot more! 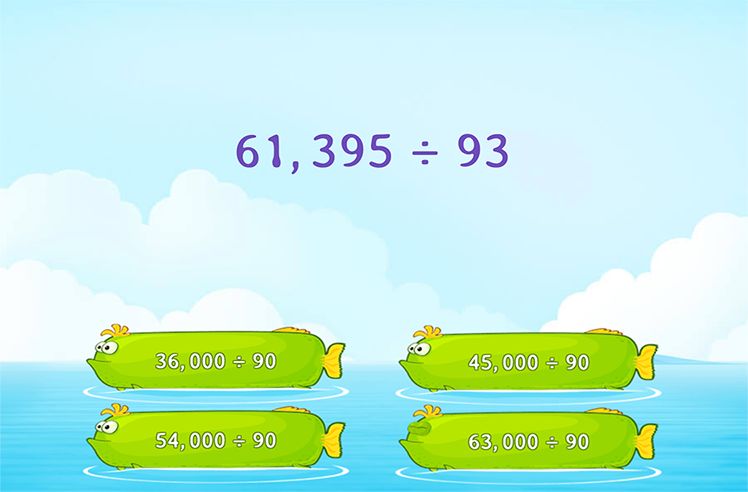 Select the Expression to Estimate

Here your young mathematician will learn a new concept in division. The students will select the correct division expression to estimate the quotient in this game. Students will choose the correct answer from the given options to solve the problems. 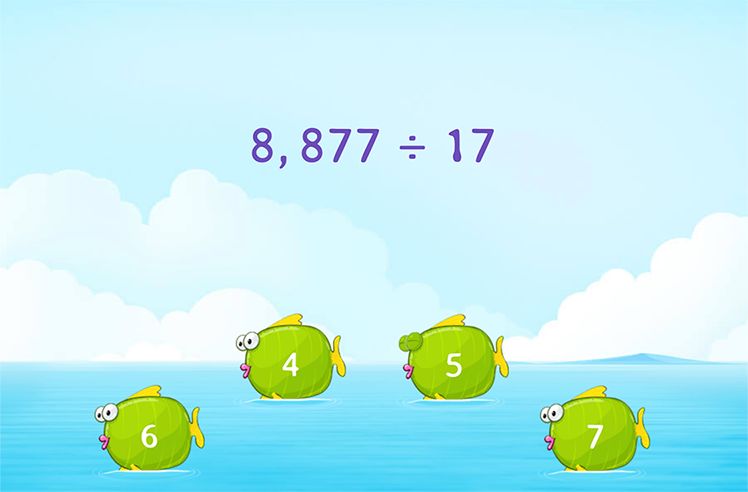 Identify the First Digit of Quotients

Help your child become an expert in division with this game. There are misconceptions that are often associated with concepts like division, but those can easily be put on the back burner with regular and targeted practice. Here students are required to use their understanding of division to identif... 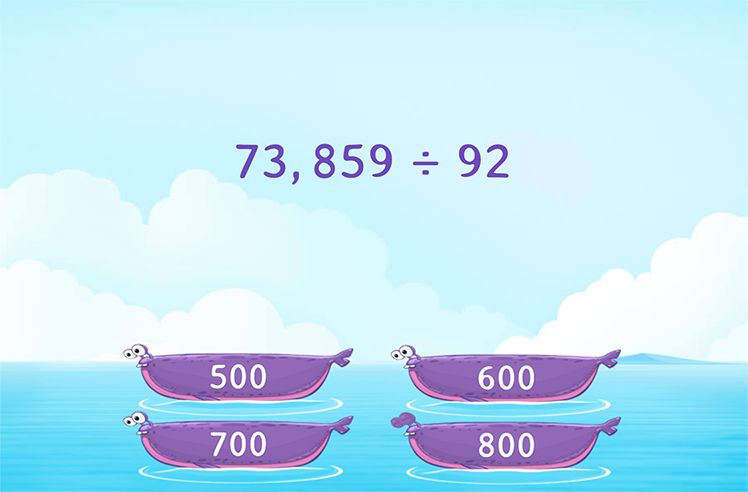 Building a strong foundation in division is an important step in helping your child become proficient and confident. The game requires students to estimate the quotients of multi-digit division problems. The game involves multi-digit numbers, it is important for students to gain confidence in a conc... 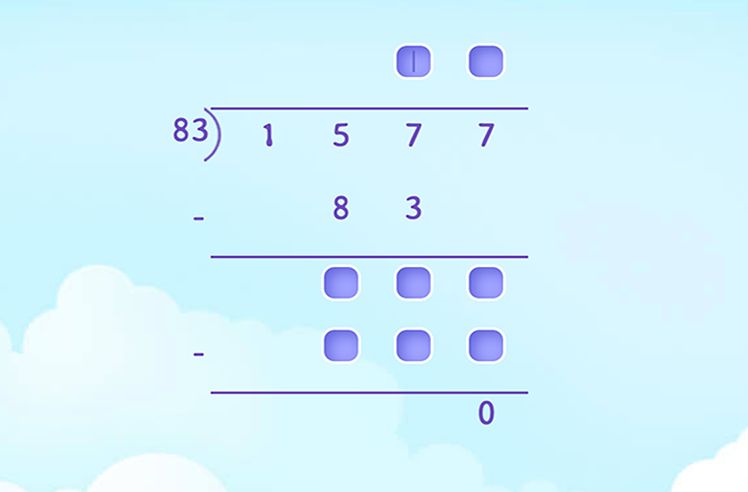 The game invites learners to work with a set of problems on long division and find the missing number. At this stage, students will work with multi-digit numbers. Students will need to fill in the given blanks to complete the tasks.

All Division Games for 5th Graders 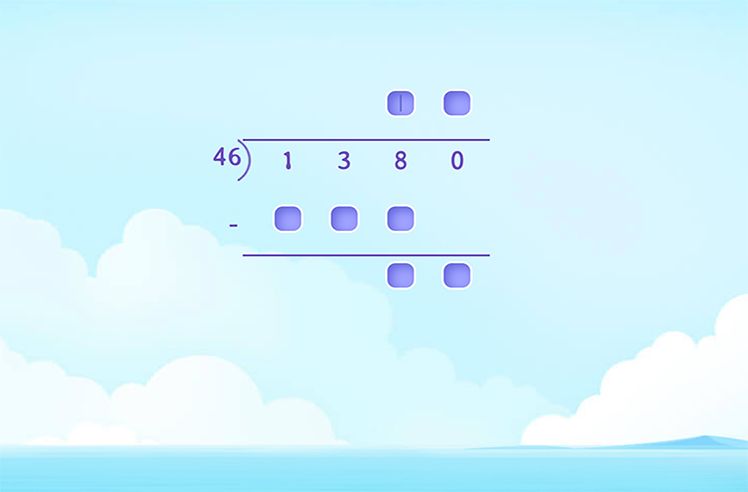 Your child will practice division with this colorful game. Concepts like division can be confusing for kids, but with practice they can gradually get more comfortable. This game consists of smartly designed tasks to help your young mathematician practice the previously learned concepts of division. 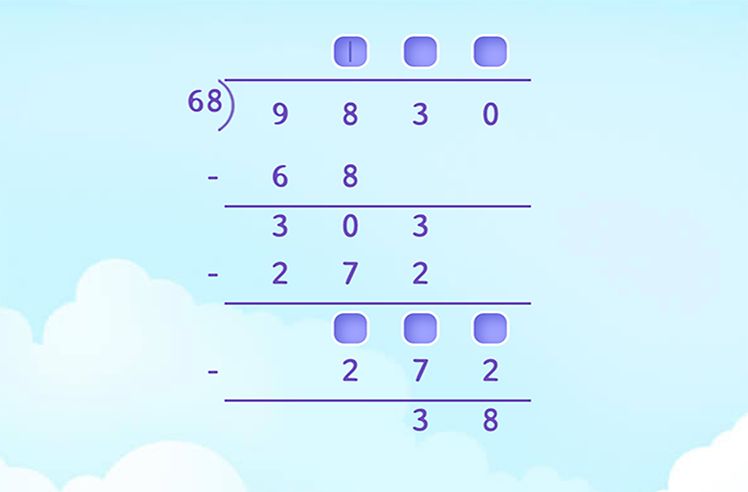 Complete the Division with Remainder

Kids often develop misconceptions about concepts in mathematics, including division. It is important to help them get over those misconceptions. The game requires students to recall concepts related to long division and complete the division steps to move towards mastery in the topic. Here the rigor... 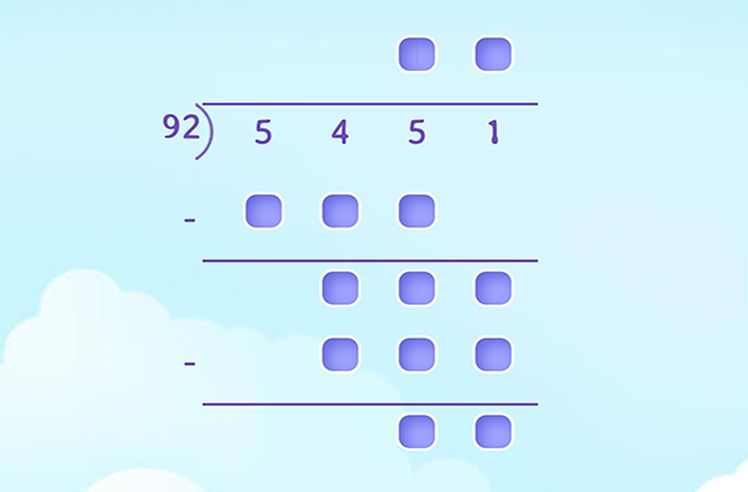 Determine the Quotient and the Remainder

The game challenges students to solve a set of problems on long division. These engaging problems encourage them to apply their prior knowledge of the topic and divide multi-digit numbers. Students will determine the quotient and the remainder in this game. Students will need to fill in the given bl... 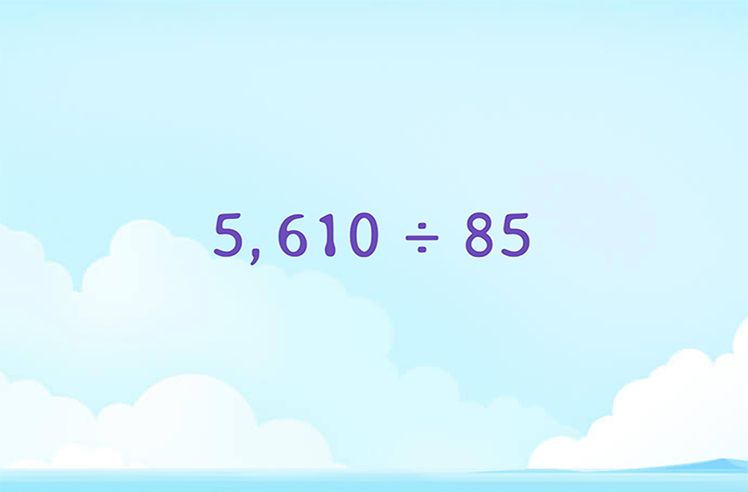 Divide and Check the Remainder

Build your child's division skills with this game. Students' struggle with division is often attributed to a lack of adequate practice. Timely and effective practice with a focus on fundamentals will help your child become more proficient in these concepts. The game has a set of problems logically c... 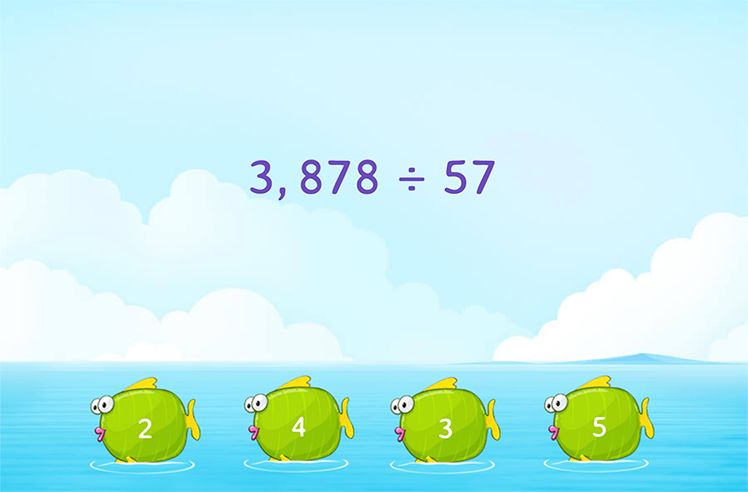 Struggles with division can be easily overcome if students practice the concept in a fun and engaging way! The game strengthens students' problem-solving ability while they develop fluency with the concepts of division. Students are required to divide and find the remainder in this game. They will w... 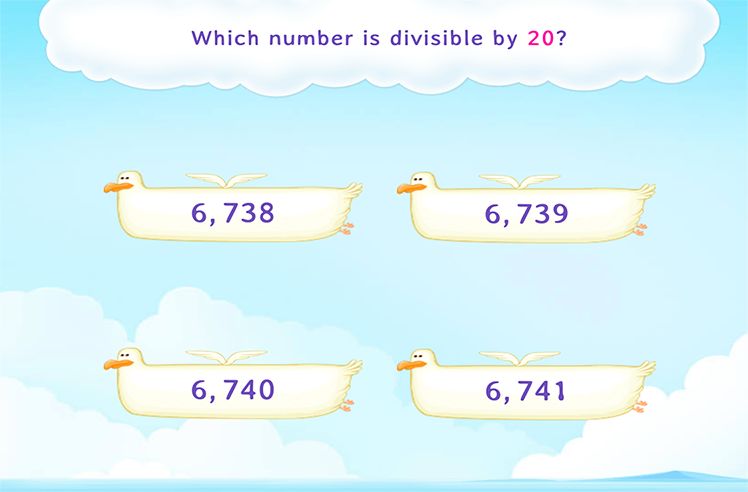 Identify the Number that is Divisible

The game provides learners with opportunities to work on a set of well-designed problems, enabling them to develop fluency with the concepts of division. Students will identify the number that is divisible by the given divisor in this game. They will need to analyze and select the correct answer fro... 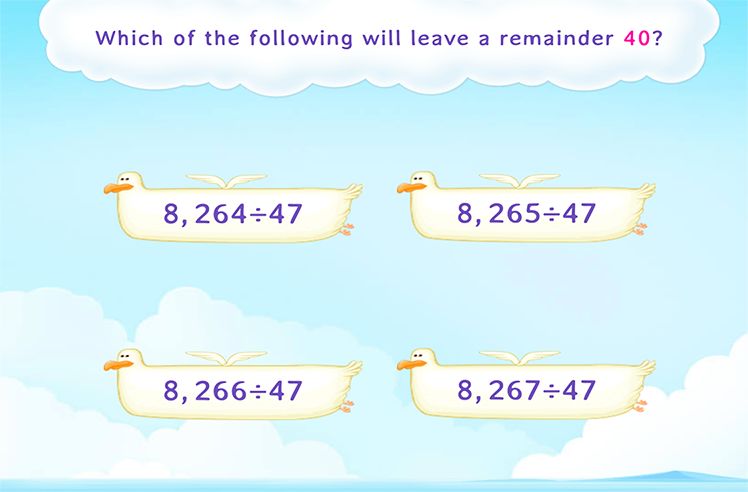 Help your child become fluent in division with the help of this super fun game. There are misconceptions that are often associated with concepts like division, but those can easily be put on the back burner with regular and targeted practice. Students are required to select the division expression t... 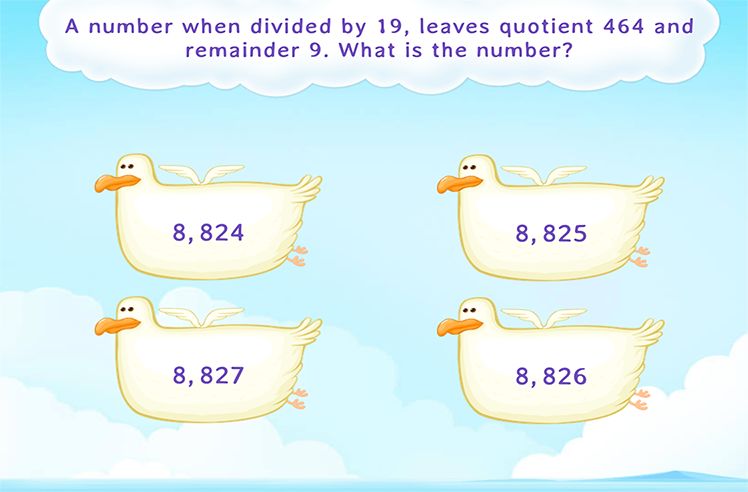 Q1: How do you solve division problems?

Q2: What is a division fact for 5th Graders?

Q3: How do you divide numbers using long division?

Ans: To divide numbers using long division, we put the divisor outside the division box and dividend inside it. We identify the first one or two digits that are closest to multiple of divisor which is either equal or less than first one or two digits. We write the multiple in quotient box and below the digits in the dividend. Then, we subtract the multiple of divisor from first digits of the dividend. Then answer obtained is the remainder in this case. We bring down the next digit of dividend and repeat the same process till we obtain the final remainder which is either 0 or a number less than the divisor.

The previous grade fosters reasoning skills in kids to derive an arithmetic expression from the given word problem. With suitable operators to swiftly add, subtract, multiply and divide 4-digit numbers by a single-digit number; the result of “division” operation is computed in terms of quotient and remainder. Also, long division methods and division by multiples of 10 and 100 enable to quickly divide the numbers and obtain a precise answer.

In grade 5, the 2-digit divisors are introduced to further enhance the skills for advanced math. Understanding of concepts like know-how technique to form multiplication tables; kids assimilate the proficiency in the estimation of the divisor and dividend to the nearest multiple of 10. The technique boosts fast math skills and enables kids to estimate the quotients as well. The apprehension of “division” to fractional numbers and place value system is instrumental in learning measurements and cognate the conversion techniques.

“Division” as a math technique for the 5th graders is narrated as:

“Formulation of a fair sharing model to divide the number (dividend) in the specified number of groups (divisor)”.

The abstract knowledge of foundational math skills is enhanced in each grade to learn the applicability and practical aspects. “Division” as a math essential begins by creating a partition model to conceptualize and associated it with visual observation.  Fun learning math games for SplashLearn further hones the proficiency in dividing 4-digit numbers by a single-digit number and computing the quotient and the remainder (if any). Easy-to-grasp math games aligned to common core math standards for grade-5 extend the skill to the division of numbers involving fractions and double-digit divisors.

Well-formulated games assist kids to excel in math and engage in efficient homeschooling.

In the 5th grade, reasoning to comprehend a word problem is nurtured by formulating valid expressions. Kids learn to use standard algorithms and the corresponding properties of the math operations (such as the distributive property of multiplication; as a x b = b x a). With the knowledge of the base-10 system and estimating the closest multiple of 10 corresponding to a number; kids learn to strategically break the dividend and the divisor apart in base-10 units for estimating the quotient.

Comprehension of the place-value system along with the interpretation in base-10 blocks and unit blocks are instrumental in the cultivation of visual observation skills to divide by fractional divisors.

SplashLearn worksheets encourage kids to think logically with reasoning and language comprehension to understand math concepts. Unique, engaging and interactive interface with a colorful theme-based display foster deep-rooted concepts in kids. Following a well-planned routine to solve the comprehensive exercises assists in fast mental calculations and excel in math without any fear.

The upcoming section discusses the different cases with 2-digit numbers & fractional values as the divisor and corresponding decimal arithmetic.

To divide a number by a two-digit divisor, consider an example as follows:

To solve the problem using fast math skills, estimate the closest value (a multiple of 10s and closer to the dividend) which upon subtraction will yield 0 or a remainder less than the divisor. For example,

As discussed previously, the division result may end in a quotient and a remainder. Consider the following example:

As kids learn the division techniques for whole numbers and dividing the number by a multi-digit divisor (single digit and two-digit), learning the “division” by fractional values turns easy.

Following chart illustrates the multiple cases of the division with unit fractional values. 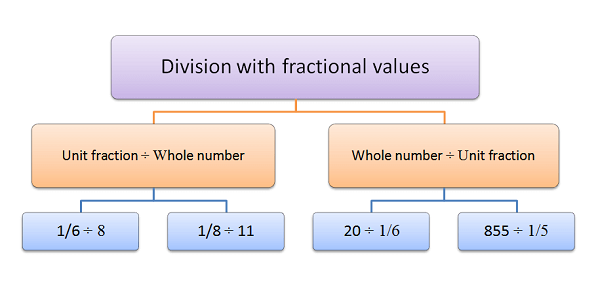 Divide a unit fraction by a whole

To divide a unit fraction by a whole number, illustration similar to a line plot is helpful in understanding the method.

Divide whole by a unit fraction

As the numbers are interchanged, a case in which a dividend is a whole number and the divisor is a unit fraction, the “division” equation is similarly framed using the line plot. The only difference is in the numerator instead of the denominator.

Reference image: To divide 3 by 1/5, count the number of blocks

Divide decimals by a multiple of 10

To divide a decimal number by a multiple of 10, adjustment in the place value of decimal is the first step. The decimal is adjusted to the left by one place with each 10.

Divide decimals by a whole

To divide a decimal number by a whole number, place value system to rewrite a decimal number is helpful in framing an easy division equation. Following the method of long division or short division as per the multi-digit divisor, an equation can be solved as illustrated in the example. 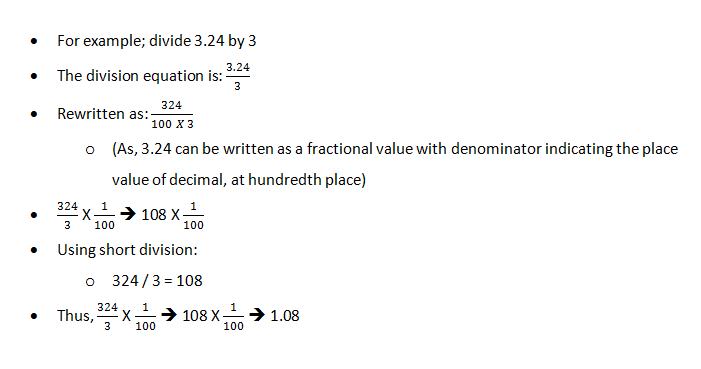 To divide a decimal number by another decimal number, division equations are framed with the knowledge of place value system and cancellation of base 10 multiples with each other. The concept is illustrated with an example for understanding the technique. 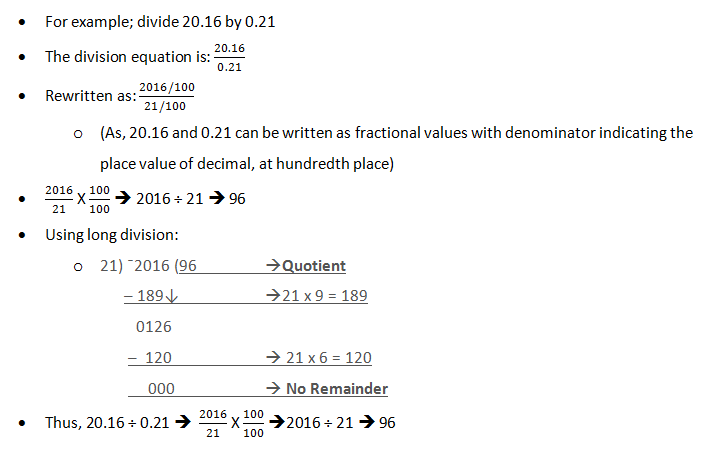 “Division” operation using decimal arithmetic, unit fractions, and the multi-digit divisor is the foundation of learning measurement, data representation, and geometry. Also, in practical aspects, the concept is used widely for drawing maps, re-scaling measurements such as length and height proportionately, converting physical quantities like weight and capacity etc. to different units (metric and US customary) for easy interpretation.

The utility of basic math operations in learning advanced math concepts is evident from the complexity of word problems in grade-5. With the development of division skills to fractional and 2-digit divisors; kids understand and grasp the math involved in data representation, measurement and geometry and comprehension of “fair sharing model”.