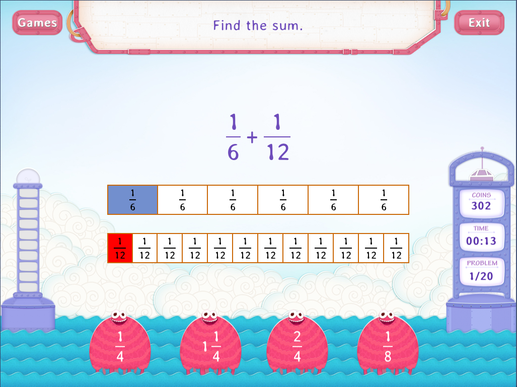 Now that children are familiar with like fractions, they are ready to work with unlike fractions. This fun and interactive game, doubling up as an interactive worksheet, introduces Grade 5 children to adding fractions with different denominators using their prior knowledge of equivalent fractions.

- Form a visual understanding of adding fractions with unlike denominators with the help of fraction bars.

- Utilize the number line to estimate the sum by rounding off the fractions to either 0, 1, or 1/2.

- Gradually move on to addition sentences, filling in the missing numbers in the steps.

- Consolidate the understanding without relying on visual models.

When preparing cupcakes and waffles on a Sunday morning, we need, say, 1/2 cup of flour for cupcakes and ¾ cups of flour for waffles. To buy enough flour for both, we would add the two fractions with unlike denominators (in this case, 1/2 and 3/4).

Children can now begin to carry out subtraction of fractions with unlike denominators and also learn to operate on mixed fractions.

Here’s a simple way to find a common denominator for a pair of fractions. Simply multiply the numerator of each fraction by the denominator of the other. In some cases, this gives us simplified fractions. If it does not, reduce your answer at the end.