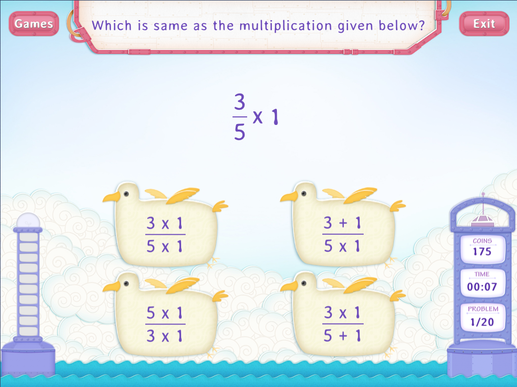 - Encounter situations where multiplying fractions by a whole number results in another whole number. For example, 20 x 3/4 = 15.

- Apply the knowledge of comparing fractions in deciding if the product of a fraction and a whole number is greater or smaller than a given number.

We come across many situations where we end up multiplying fractions by a whole number. When each person eats half a pizza and we have to order for six, we multiply a fraction by a whole (in this case, 1/2 by 6). Similarly, we do realize that buying eight quarter-sized chocolate pastries is equivalent to buying two whole yummy cakes. Needless to say, this skill helps children be ready for all this and more.

With their knowledge of multiplying fractions by a whole number, children can now learn multiplication of fractions by fractions.

5.NF.5.aComparing the size of a product to the size of one factor on the basis of the size of the other factor, without performing the indicated multiplication.

5.NF.4.aInterpret the product (a/b) × q as a parts of a partition of q into b equal parts; equivalently, as the result of a sequence of operations a × q ÷ b.