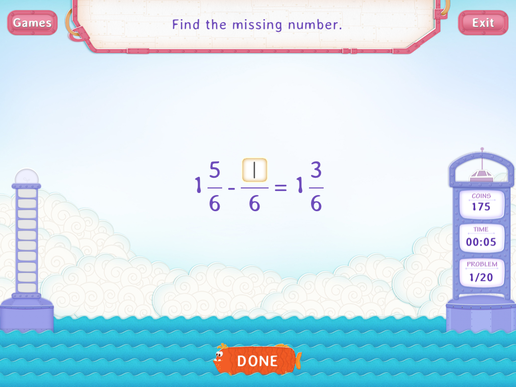 - Subtract mixed numbers by subtracting the whole numbers and fractional parts (with like denominators) separately.

- Complete a mixed number in a subtraction sentence.

Let’s say we are preparing cupcakes and measuring out ingredients. We measure out, for instance, 4 ½ cups of flour into a bowl and then realise we misread the recipe. It’s actually 2 ⅔ cups of flour. How many cups of flour would we need to remove from our mixing bowl? That’s where subtraction of mixed numbers comes in handy.

Now that children have learned to add and subtract mixed numbers, they can move onto the multiplication of unit fractions by a whole.

4.NF.3.cAdd and subtract mixed numbers with like denominators, e.g., by replacing each mixed number with an equivalent fraction, and/or by using properties of operations and the relationship between addition and subtraction.