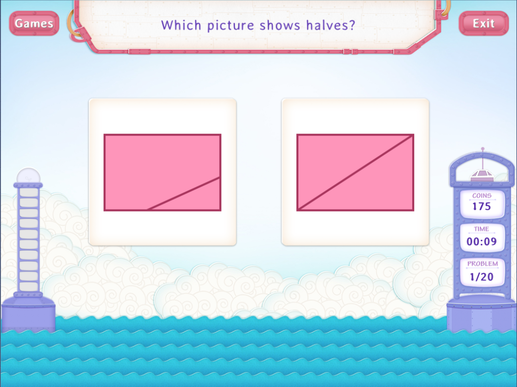 Practice partitioning circles, rectangles and triangles into 2, 3 and 4 equal shares in more than one way. Students also get more comfortable with vocabulary like halves, thirds and fourths. They also understand the relationship between a whole and its equal shares. For example, 1 whole has 2 halves or 3 thirds make a whole. Partition shapes Worksheet also exposes students to situations, where equal shares of a whole do not have the same shape. Partitioning shapes in the first and second grades builds a foundation for introduction of fractions in the third grade.

2.G.3Partition circles and rectangles into two, three, or four equal shares, describe the shares using the words halves, thirds, half of, a third of, etc., and describe the whole as two halves, three thirds, four fourths. Recognize that equal shares of identical wholes need not have the same shape.