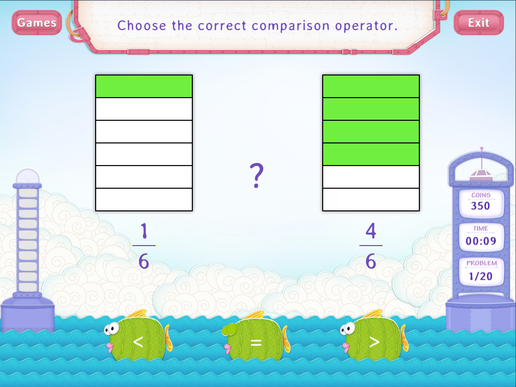 Now that third graders can generate equivalent fractions for simple fractions without the help of models, it is time to move on to comparison of like fractions. Children compare the size of two fractions using fraction models and number lines in this interactive worksheet.

- Identify the greater or smaller fraction for a given fraction.

- Model a fraction greater than, smaller than or equal to a given fraction.

- Compare fractions on a number line.

- Order two or more fractions from the greatest to the least or vice-versa.

Understanding the magnitude of a given fraction and its relation to other fractions is important. When we score 18/20 on a test and a friend scores 17/20 on the same test, we know we’ve scored higher because we’ve correctly compared the two fractions.

Do you know who invented fractions? The Egyptians, in 2000 B.C., invented the concept of fractions to simplify tax collection from land. A piece of land was divided into sections (or parts), and each section was taxed a certain amount. If you owed two such sections, you’d pay twice the amount, three such sections, three times the amount, and so on.