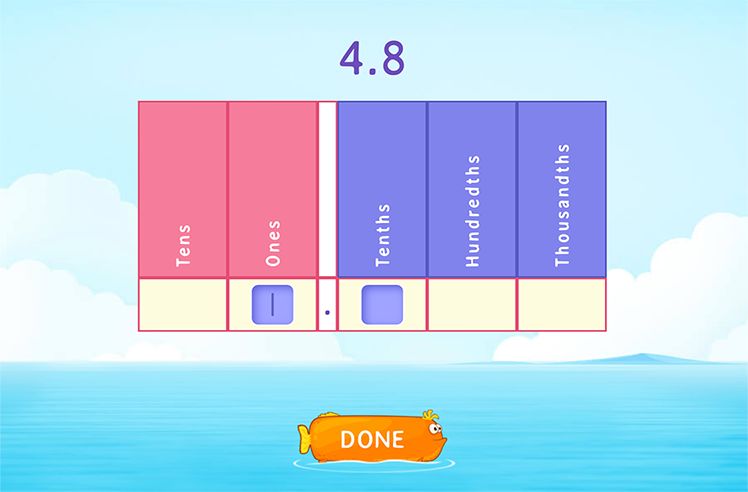 Decimals on the Place Value Chart

Boost your child's understanding of place value with this game. Concepts like decimals can be confusing for kids, but with practice they can gradually get more comfortable. Students will need to fill in the given blanks in the given place value chart by identifying the position of each digit for the... 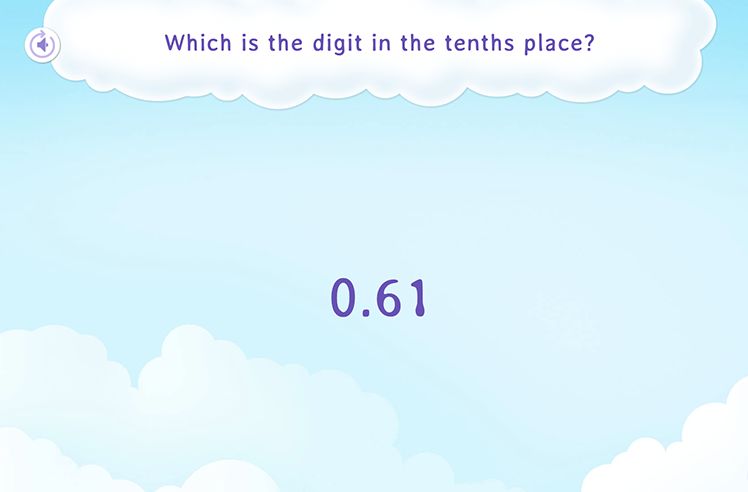 Identify the Digit at a Place

Kids often develop misconceptions in mathematics very easily and the concept of decimals is no exception. It is important to help the students get over those misconceptions. The game invites learners to work with a set of problems on decimal place value and identify the digit at the given place. You... 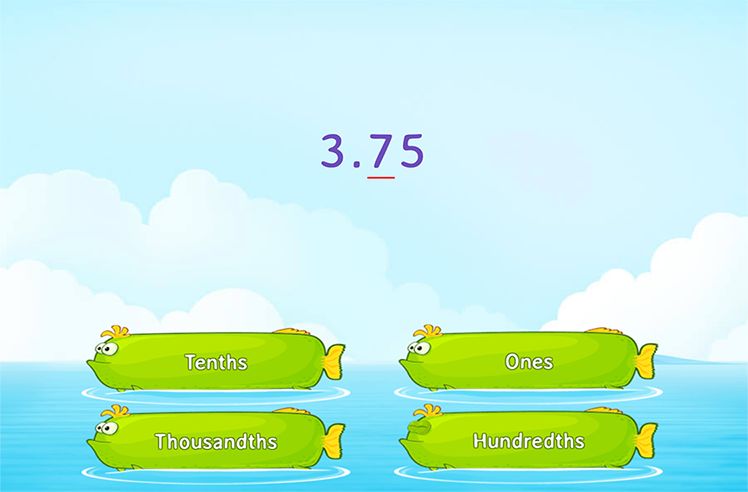 The game requires students to recall concepts related to decimal place value and tell the place of digits in decimals numbers to move towards mastery in the topic. The student will learn to identify the tenths and hundredths place in this game. Students will need to analyze and select the correct an... 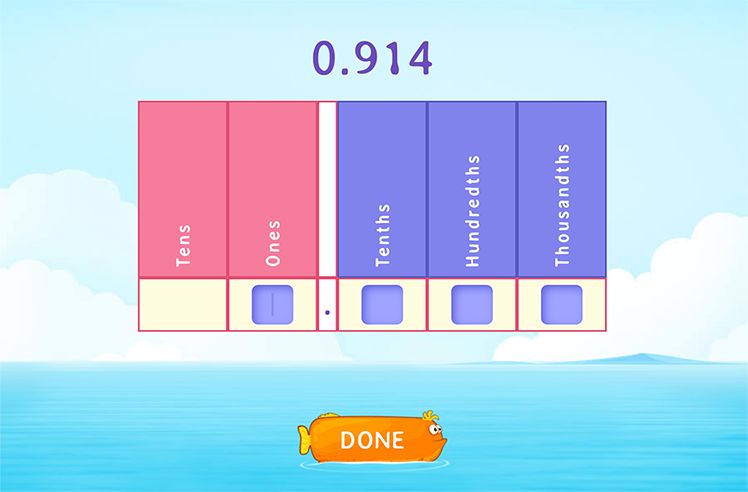 Decimals (Up To Thousandths) on Place Value Chart 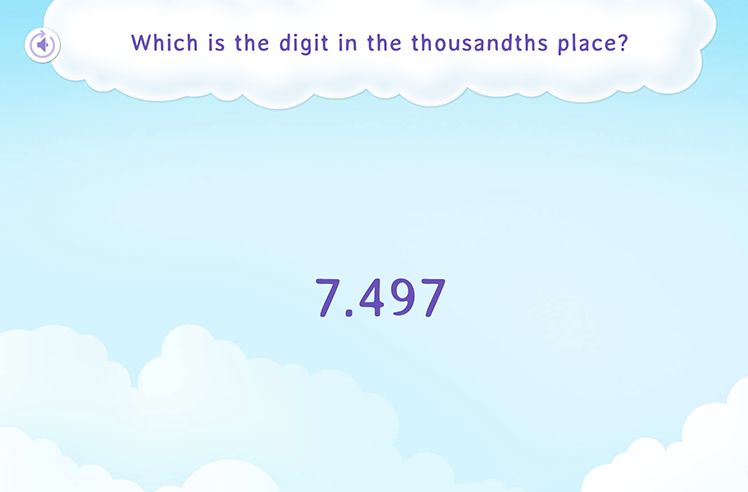 Identify the Digit at a Place (Up To Thousandths)

Struggles with understanding decimals can be easily overcome if students practice the concept in a fun and engaging way! The game challenges students to solve a set of problems on decimal place value. These engaging problems encourage them to apply their prior knowledge of the topic and identify the... 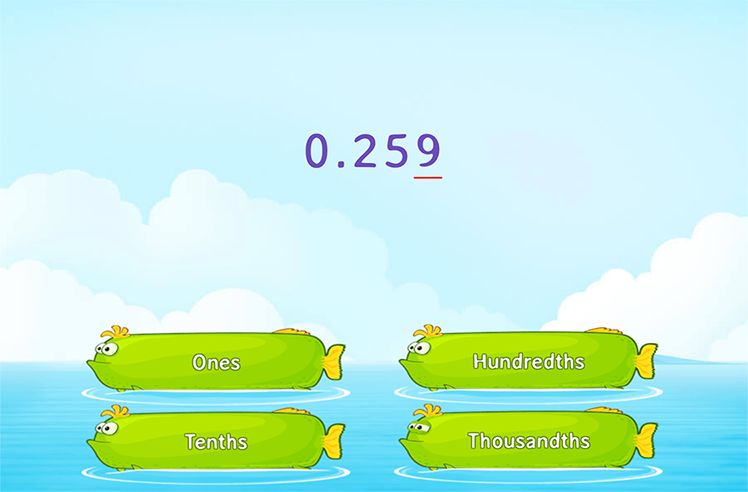 Identify the Place (Up To Thousandths)

The game encourages your young mathematician to use their understanding of decimal place value to tell the place of digits in decimal numbers. The student will identify the place (up to thousandths) in this game. Students will need to analyze and select the correct answer from a set of given options... 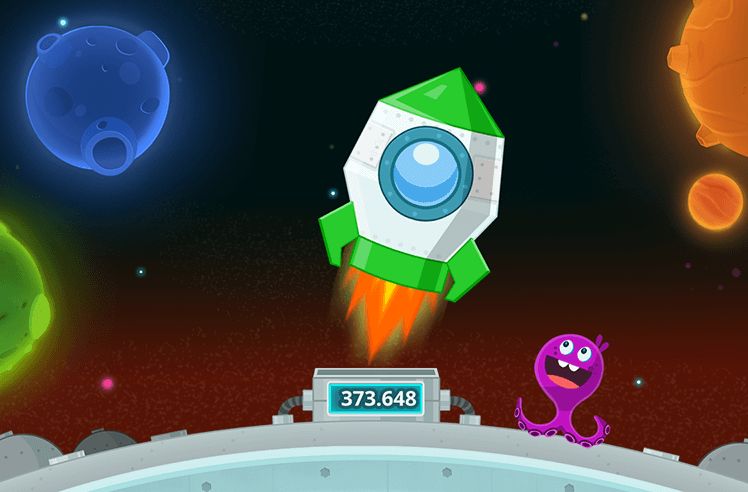 Adjust the digits in the rocket ship to help the clients reach their home planet. Are you ready to play this game with your alien friends? Help your child become fluent in place value with the help of this super fun game. The game invites learners to work with a set of problems on place value and ma... 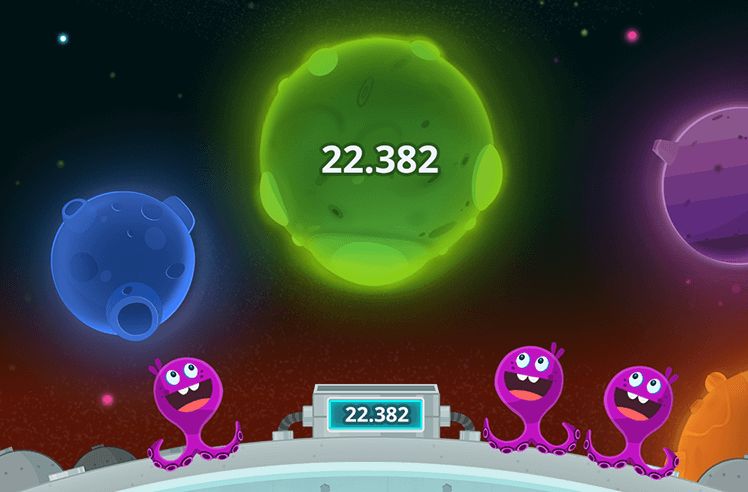 Your alien friends need you! They want to go home and only you can help them by adjusting the digits on their rocket ships! Let's get the going away party started! The game strengthens students' problem-solving ability while they learn the concept of place value. Learners will use their understandin... 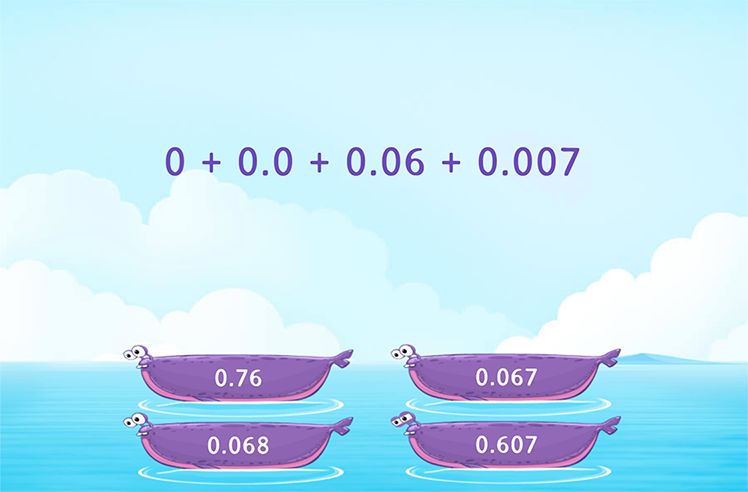 Help your child become an expert in the concept of decimals with this game. Your young learners will be able to convert decimals numbers from expanded to standard form as they attempt to answer questions in this game. Students will need to analyze and select the correct answer from a set of given op... 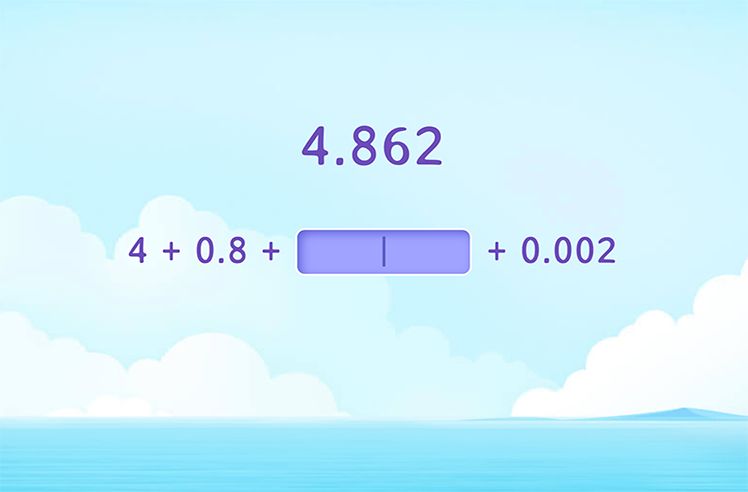 Building a strong foundation in composing and decomposing is an important step in helping your child become proficient and confident in the concepts of decimal place value. The game gives students an opportunity to apply the concepts of converting decimal numbers from standard to expanded form in th... 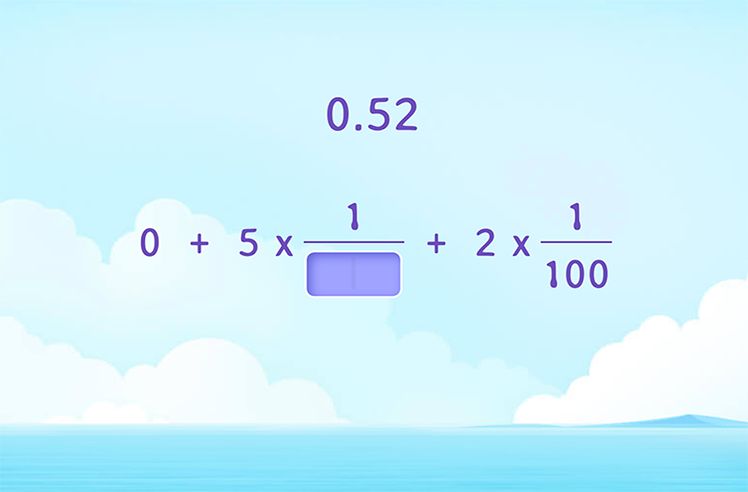 The first ever method of counting was counting on fingers. Tallies came later and were used for quite a long time. This gave way to Roman numerals. There used to exist many counting systems like clay tokens. After years of evolution a well-accepted and user-friendly decimal system with a base of ten that uses the digits 0, 1, 2, 3, 4, 5, 6, 7, 8, and 9 came to existence. Place value plays an important role in the structure of the decimal system.

To have a strong base for the topic, it is recommended to include preschool math activities and learning games for kids while introducing the topic place values. To reinforce the concepts learned, there are many educational games for kids available on the internet.

In grade 1, they start with the place value definitions and deal with only tens and ones there using math games and place value activities. Gradually increasing the number of digits, by grade 4 they are comfortable with multi-digit whole numbers as well as decimals. By the end of the fourth grade, kids have a thorough knowledge about what is place value and its application in various fields of mathematics.

The number at the right most, 9 is at one's place, the number 6 at ten’s place, 2 at the hundred’s place and the number 1 at the thousand’s place.

The number can be written in expanded form as

and can be decomposed as

Here, the digit 5 that comes right after the decimal point has a place value of tenth. That is, the place value is

. The digit right to it has a place value of hundredth or

. Similarly, the right most digit, 8 has a place value thousandth or

Thus, the expanded form of the number is

if you move towards the right.

Thus, the value of a digit depends on its position in a number.

SplashLearn is one of the math websites that provides well-structured math worksheets for various grades math skills.  It's worksheets for practicing the place value strategies for decimals covers the required 5th grade math decimal topics well.

Multiplying by Powers of 10

To multiply the number by 10, each product in the expanded form has to be multiplied by 10.

In a similar way, when a decimal number is divided by 10, the place value of each digit gets divided by 10 and the decimal point shifts one unit to the left.

The multiples of 10 can mathematically be written using base and exponent. The base represents the number which is multiplied, 10 in this case. The exponent shows the number of times the base is multiplied.

Thus, when a decimal number is multiplied by a power of 10, the number of places that the decimal point moves are equal to the exponent.

Read and Write the Decimals to the Hundredth

Kids are already familiar with the decimals, fractions and their equivalence. Concrete models like base ten block, place value charts, hundred’s grid, and math manipulatives are used to reinforce the basic. They use fractional language to read decimals up to thousandth. Kids can write decimals in fractional form as well as in expanded form. Using the fractional equivalence, kids learn that 6 tenths are equivalent to 60 hundredths and 600 thousandths.

Kids use the equivalence between a decimal and its fractional form to compare two decimals.

For example, the decimal number 0.85 can be written in many forms:

The comparison can be done using the fact that all the above forms are equivalent.

Writing the two in the fractional forms,

Kids use equivalent fractions when the decimals in fractional forms do not have the same denominator.

Kids are familiar with rounding whole numbers in grade 3 itself. In grade 5, once they are comfortable with decimals and place value definitions, they use the same principle to round off the decimal numbers. A number line is the main math manipulative used for rounding.

The math practice worksheets for plotting decimals on a number line, rounding decimals, and comparing decimals will help students to have a good command over the topic.

In grade 4, kids have learned how to multiply one-digit and two-digit numbers. In grade 5, kids apply various strategies for multiplying multi-digit whole numbers.

Breaking up into comfortable numbers: Consider the product 425 by 13.

Kids can break the two digit number 15 as 10 + 5 so that the multiplication is simpler. That is,

Now the products are simpler and can even be done as a mental math. A multiplication by 10 results in an increase of place value of each digit by 10. Thus,

Area Models: Here, the multiplicand, as well as the multiplier, are decomposed and the corresponding rectangular area models are drawn.

Now, the product of the two numbers is same as the area of the rectangle with sides equal the numbers. The bigger rectangle is divided further into smaller rectangles which make the computations easy.

Standard Algorithm: The standard algorithm of multiplying two numbers is also used. The method involves multiplying the multiplicand by each digit of the multiplier, aligning the place values.

In grade 4, kids performed division up to a two-digit number by a one digit whole number using the connections between division and multiplication. Also solving the logical question of how many divisors are “contained” in the dividend. In grade 5, when the dividend is a four-digit whole number and the divisor is a two digit number, the mathematics behind is the same with trickier calculations.

There are 2,852 soft drink cans in a warehouse. These have to be packed in cartons. Each carton can hold 21 cans. How many cartons would be required?

Here, the number of cartons is equal to

Using the connections between division and multiplication: The dividend 2852 can be written in expanded form as

Consider some friendly multiples of 21.

The next step is to find the number of 21s contained in 752.

which is a number less than the divisor. So, it is the remainder. This procedure can be tabulated as:

Area Models: Similar to the area models for multiplication, here the area of the rectangle and one of the dimensions, say height are available. This can be used to find the length of the rectangle.

Addition and Subtraction: The equivalence between decimals and fractions would give a visual image for addition and subtraction of decimals. For example, 0.3 is equivalent to

A standard algorithm would include lining-up the decimals according to the place value and adding the digits in the corresponding place values.

Multiplication: Multiplication can be considered as a repeated addition. Here again, the equivalence between decimals and fractions can be used to find the products.

and multiplying by 3 denotes adding it three times, resulting in

When there are two decimals like 0.4 and 0.6, the fractional strips for multiplication can be used. 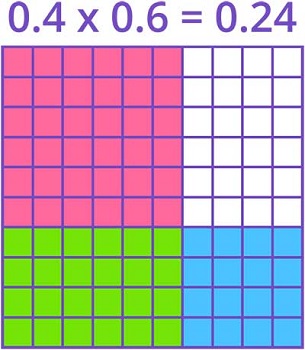 Division: The division of decimals is explained using the relation between the multiplication and division. When there is a division problem,

. Since kids are more comfortable working with whole numbers than decimals, we can consider the whole number version of this division as

Plenty of place value worksheets for operations in decimal are available in SplashLearn.