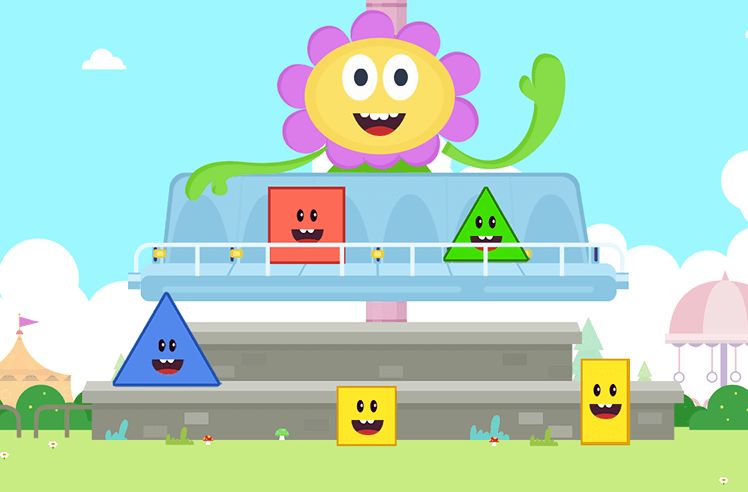 Shapes, shapes, all the way! Shapes, shapes on their way! A trip to the amusement park is all they need - are you here to help them play this way? Improve your child's proficiency in geometry with this game. The game encourages students to identify 2D shapes presented in different orientations. 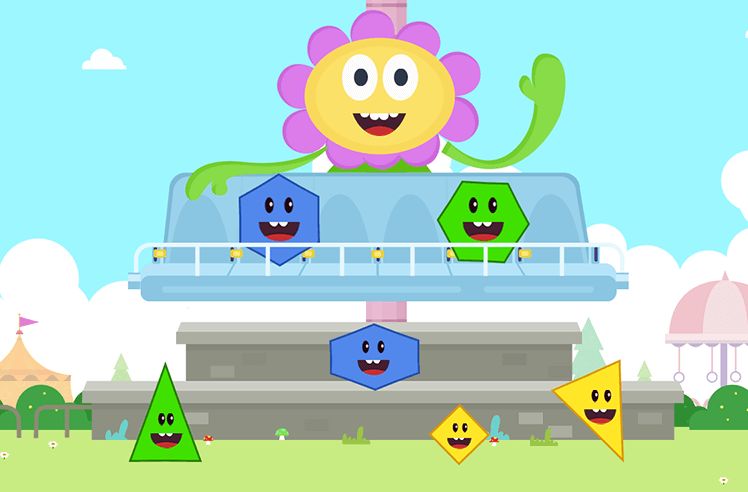 Fun with shapes! Get your little one to send the shapes on a trip to the amusement park. The game involves working with a set of problems on two-dimensional shapes. The students will learn to identify trapezoid, hexagon, and pentagon by their name in this game. 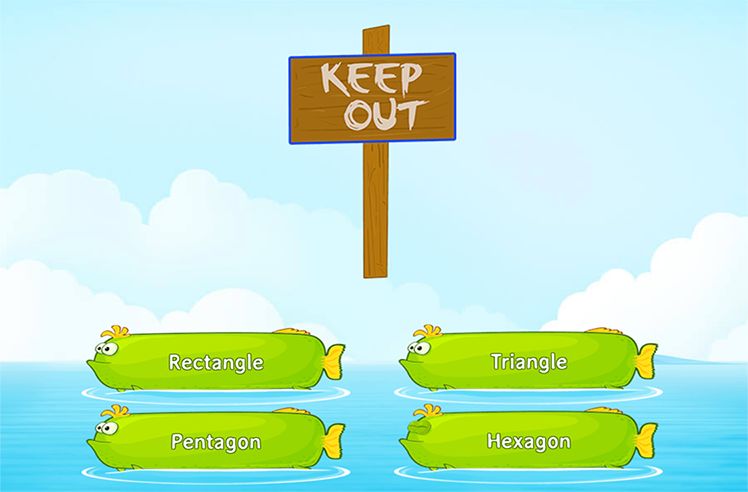 Build your child's 2D shapes skills with this game. Concepts like 2D shapes can be confusing for kids, but with practice, they can gradually get more comfortable. The game invites learners to work with a set of problems on geometry and identify shapes in the real world. 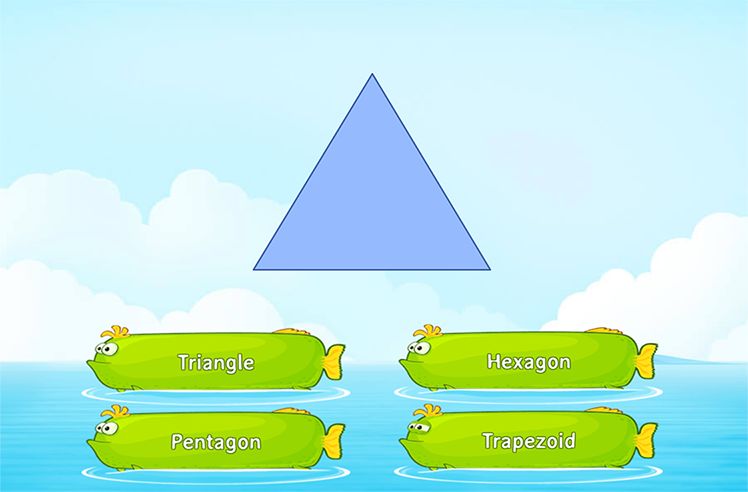 Kids often develop misconceptions about concepts in mathematics, including 2D shapes. It is important to help them get over those misconceptions. The game requires students to recall concepts related to geometry and identify 2D shapes to move towards mastery of the topic. Your second grader will hav...

All Geometry Games for 2nd Graders 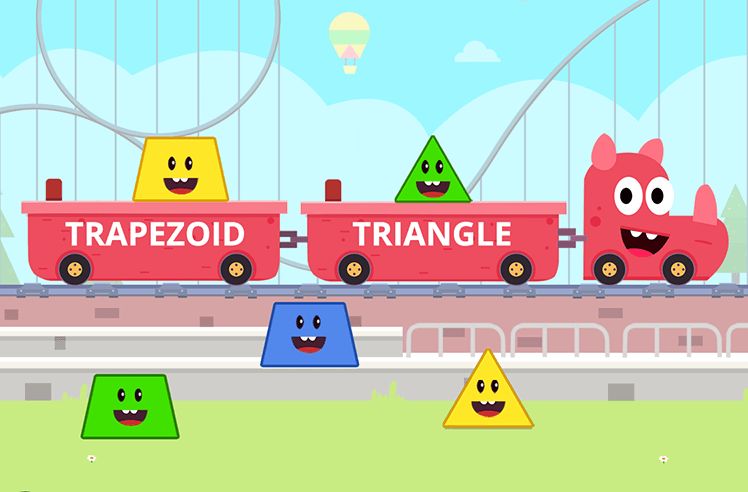 Sort the Shapes by Name

This will shape out to be a pretty fun game that will end with your kid learning all about different shapes! The game is about sorting shapes based on their names and by doing so, your young mathematician will practice more on the concepts of 2D shapes. This game will nudge your second grader toward... 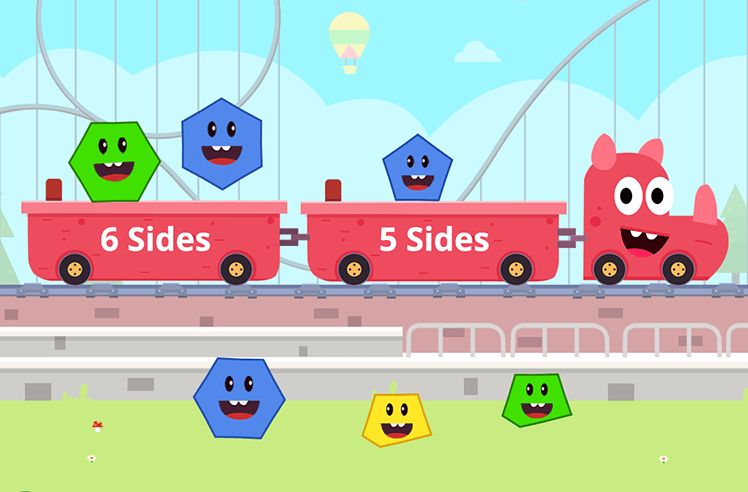 Sort the Shapes by Attribute

Learning begins with fun! Learning ends with rewards! Are you a shape champion who can send these little shape props on their day out to an amusement park? Play and find out! Your child will practice attributes of shapes with this colorful game. The game encourages students to apply their understand... 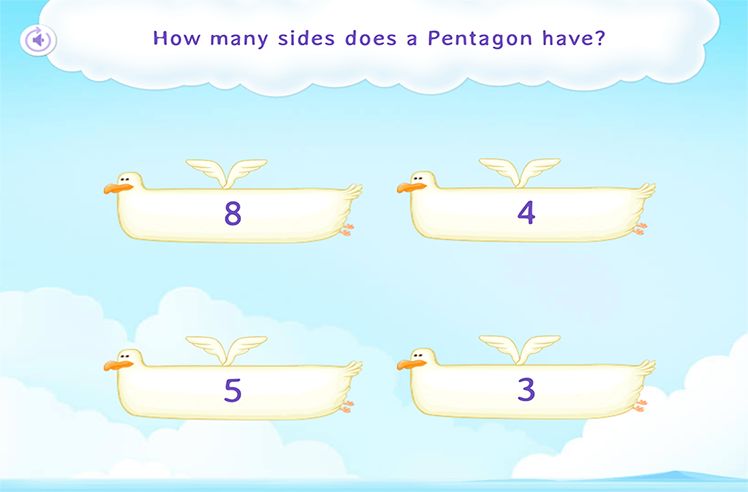 The game challenges students to solve a set of problems on the attributes of 2D shapes. These engaging problems encourage them to apply their prior knowledge of the topic and find the answer. The student will be required to select the correct number of sides and corners in this game. Students will g... 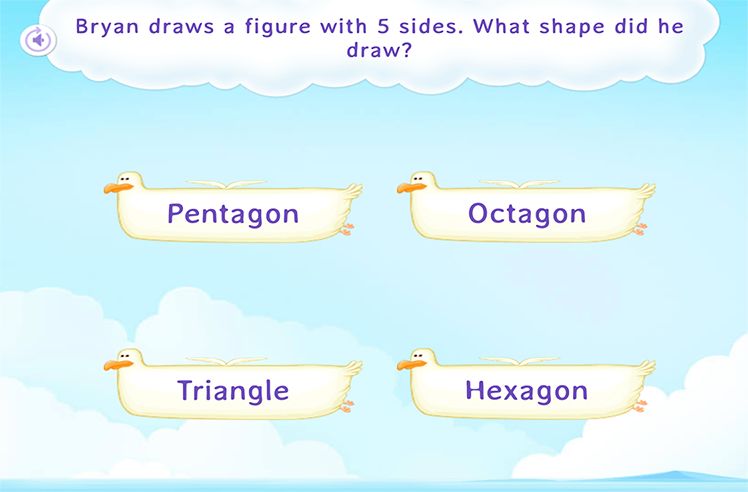 Identify the Shapes on basis of Sides 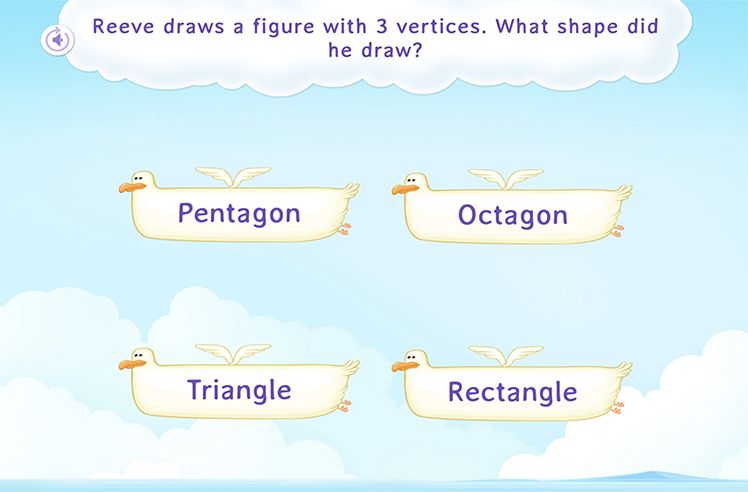 Identify the Shapes on basis of Corners

Struggles with identifying shapes can be easily overcome if students practice the concept in a fun and engaging way! The game encourages your young mathematician to use their understanding of the number of vertices to identify shapes. This game will nudge your second grader towards mastery and devel... 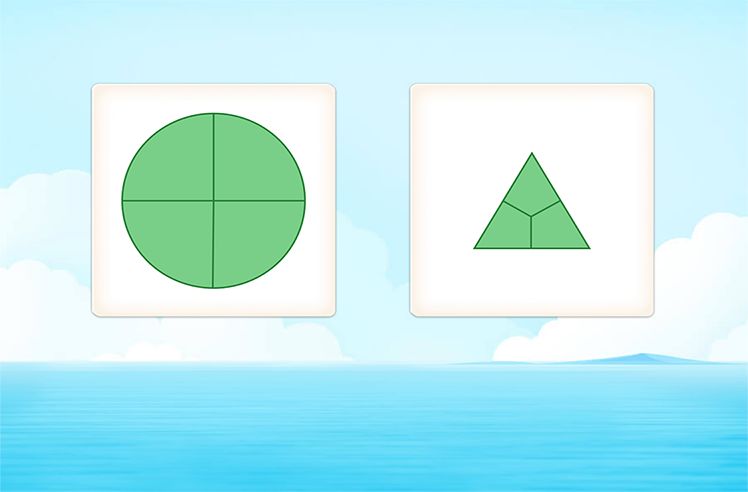 The game gives students an opportunity to apply the concepts of two-dimensional shapes to identify the partitions. The student will identify halves and fourths in this game. Students will tap on the interactive elements to mark their responses. 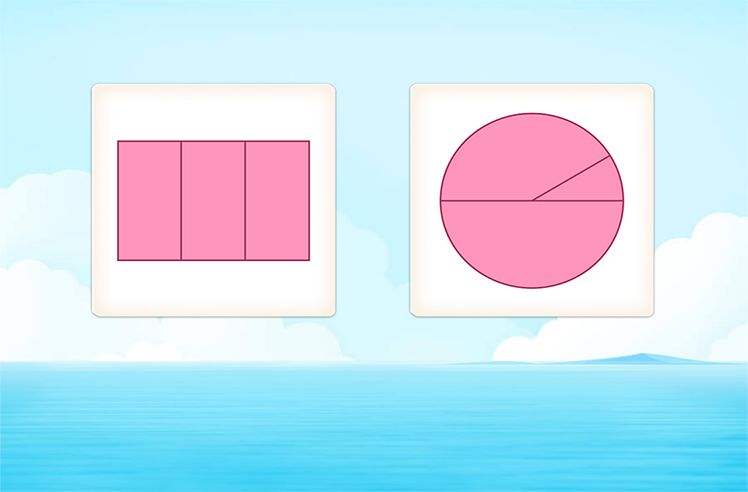 Help your child learn partitioning 2D shapes in an efficient manner with this challenging game. There are misconceptions that are often associated with concepts like partitioning 2D shapes, but those can easily be put on the back burner with regular and targeted practice. The game involves working w... 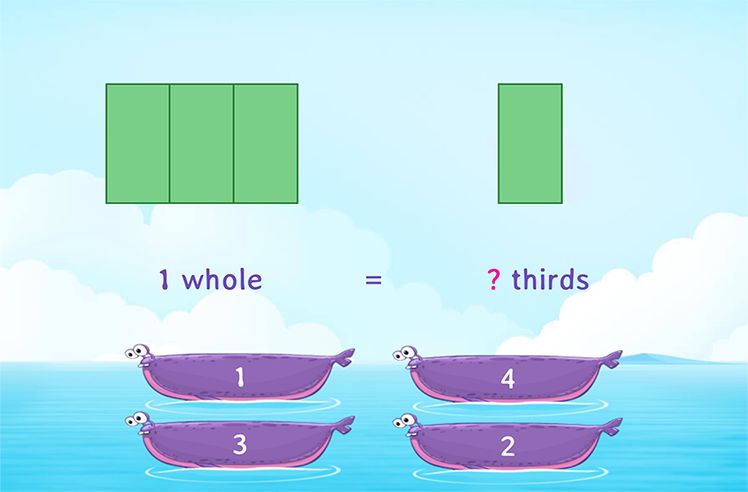 Relating Thirds to a Whole

Building a strong foundation in partitioning 2D shapes is an important step in helping your child become proficient and confident. The game encourages students to apply their understanding of two-dimensional shapes to find the number of parts in a whole. What better way for your second grader to lea... 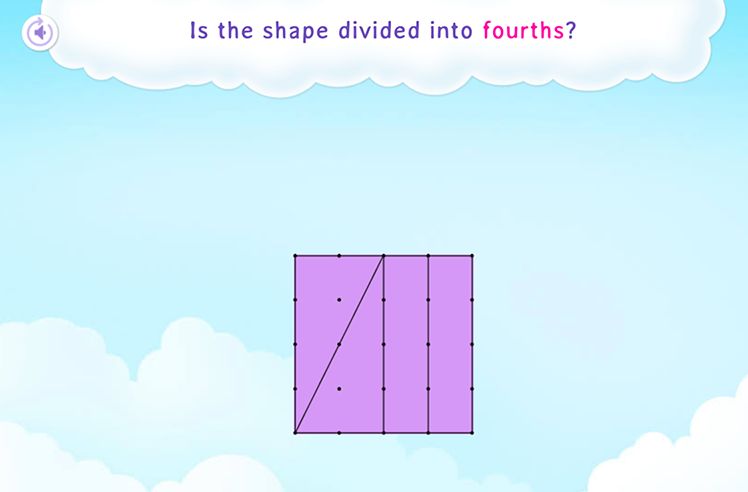 The game requires students to work with a set of problems on two-dimensional shapes and use their conceptual understanding to identify the partitions. Students will choose the correct answer from the given options to solve the problems. Help your second grader become proficient in geometry with this...

Why is Geometry important? 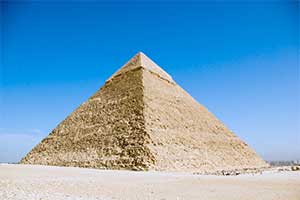 The universe is built of shapes and geometry is the mathematics of it. But often the geometric field of mathematics is neglected. The importance of geometry is not realized until it gets abstract and one deal with geometry proofs examples or geometry theorems.

The field of geometry is broad and has many applications. Often, problems of other field become easier to solve when it is represented geometrically. The study of geometric relationships is used in the field of architecture and landscaping. It is seen that the many people think better visually. Geometry makes visualization logical. 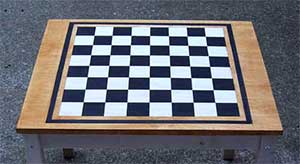 Moreover, geometry connects many other fields of mathematics. For example, interpretation of bar graph involves finding the area of a rectangle. Fractions are better understood through the representation of geometric pictures. Equal sized squares are used to represent tens, hundreds, and thousands. Coordinate geometry is used to analyze algebraic relationships. Therefore, geometry is one area of mathematics that is used most widely in learning math and also other fields.

Grade 1: In this grade, children develop skills to reason with shapes and attributes. They understand basic geometric shapes definition. They analyze shapes from their defining attributes, like number of sides. They compose two dimensional and three-dimensional shapes to make larger composite shapes. They learn to partition rectangles and circle into equal shares. They learn the vocabulary related to partitionings like quarters, fourths and halves. 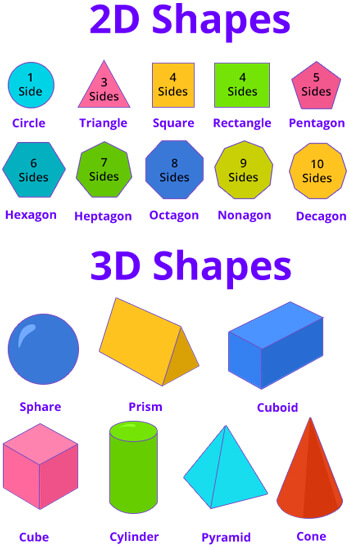 Grade 2: The kids learn to identify and draw shapes according to the given attributes. They learn to draw shapes as per the specified number of faces or geometry angles. They are able to identify cubes, pentagons, hexagons, quadrilateral, and triangles. They also learn to partition a rectangle into same-sized squares. They then count these squares to determine the size of the rectangle. The kids learn to partition rectangles and circles into two to four equal shares. They describe the partitioned shapes using the geometry words like half of, third of, thirds, halves. They understand the wholes as four fourths, three-thirds, and two halves.

They learn that a quadrilateral is a four-sided closed figure. The shapes like square, rectangle and trapezoid are quadrilaterals. They also learn about polygons like pentagons, hexagons and 3D shape cube.

Create and compose shapes: The kids learn to identify different polygons and also learn their names. They recognize the polygons by counting the number of sides or vertices. They learn to identify polygons like pentagons, hexagons, heptagons, octagons, quadrilaterals, and triangles. They perform activities that broaden their understanding and clarify the common misconceptions. For example, they create and compose shapes using sticks of various lengths. They manipulate and construct two-dimensional shapes on geoboards. This helps them deepen their newly learned skills. 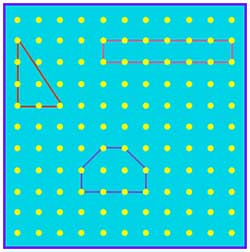 Partition shapes: The kids partition composite shapes and explore relationships between parts and wholes. They describe the parts as halves, thirds or fourths. They describe the wholes as two halves, three-thirds and four fourths. They use geometry puzzles like tangram to understand the composition of a shape. They manipulate the pieces of puzzles to explore different ways to compose new shapes. For example, they notice that smaller shapes can be repositioned in multiple ways to form a variety of larger shapes. For example, they use two right triangles to form a square. They form a variety of shapes like parallelogram, trapezoid, and rhombus on geometry puzzles.

The kids further explore their understanding of shapes using pattern blocks. They experiment with pattern blocks. For example, they create hexagon from six triangle shape blocks. This develops an understanding that the hexagon can be partitioned into six equal triangles. Alternatively, they realize that a trapezoid is composed of three equal sized triangles. In this case, each triangle described as a third. 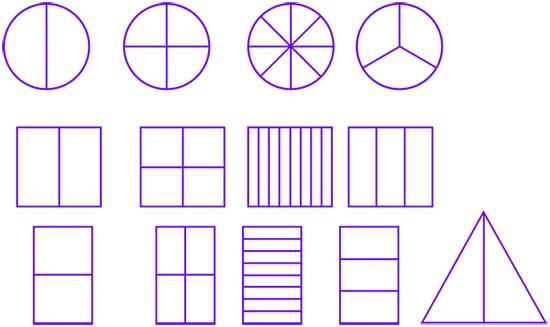 A variety of partitioned shapes in different orientations is presented to kids to deepen their understanding. For example, the kids are asked to determine if the partitioned portion of a shape represents half of the figure. The kids perform various activities to understand the concept. For example, they assemble the parts to form a whole. In which, they assemble two equal parts of a circle to form a whole circle.  The kids practice partitioning circles and rectangles on geoboards. The geometry lessons on partitioning circles serve as the foundation for telling time to a half hour or a quarter hour on an analog clock.

Geometry games can help achieve a number of instructional goals. The games can prepare settings in which the kids visualize or create a shape. The games enable the educator to assess the how well the kids have understood a concept. It also enables them to get an impression of how kids apply their knowledge under different scenarios.

Tangram is a Chinese puzzle consisting of 7 tans or shapes. The kids have to arrange these shapes to recreate a given shape. 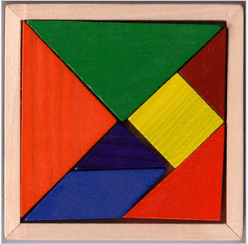 The rule of the puzzle requires all the shapes to be used without overlapping. Playing with tangrams help kids improve their spatial understanding. They also learn about spatial rotation skills the tracing to the opposite player. The opposite player needs to solve the picture by fitting in the 7 tans correctly. A timer can be set before the players begin placing the shapes in the outline. Whoever solves the puzzle first, wins the game. The players can also create geometry formula sheet consisting of the ways the tans are used to create any shape.

This game particularly enables kids to think critically about the shapes around them. It also develops their problem-solving skills.

This game requires 4 or more players and is usually played with an even number of players. The game is played in teams with each team having at least 2 players each. Before the start of the game, a bowl is filled with paper chits, which have different shapes written on them. Each team goes in turns. One player from the team will pick a chit at random. He/She will read the shape written on it without speaking it aloud. Then he or she will describe the properties of the shape to his/her team member. The team members will have to guess the name of the shape. E.g. – If the shape written on the chit is square, then the player can say that the shape has 4 sides and all sides are equal. 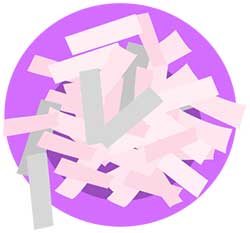 The team which is able to guess the shape in the least amount of time wins the game. This game particularly helps the kids remember the different characteristics of each shape. And also gain confidence in terms of communicating the knowledge gained by them as part of learning geometry.