Identify the Number from Base 10 Blocks

Building a strong foundation in place value is an important step in helping your child become proficient and confident. The game ensures active student participation through which your child will practice the previously learned concepts of place value. Students will identify the number represented b...

Give your child food for the mind with this game on place value. Concepts like place value can be confusing for kids, but with practice, they can gradually get more comfortable. The game has a set of problems logically crafted for your child where they are required to complete the place value charts...

Find the Missing Number in the Unit Form

Kids often develop misconceptions about concepts in mathematics, including place value. It is important to help them get over those misconceptions. The game gives students plenty of opportunities to work with problems based on place value. They are encouraged to apply their mathematical knowledge to...

Identify the Place Name for the Given Digit

The game strengthens students' problem-solving ability while they practice more on the concepts of place value. This set of problems deals with numbers within 1,000 where students will get opportunities to work with different sets along the way. Students will need to select the digit at the given pl...

Improve your child's proficiency in place value with this game. The game provides learners with opportunities to work on a set of well-designed problems, enabling them to practice more on the concepts of place value. Students will work on the unit form to standard form as they attempt to answer ques...

Struggles with place value can be easily overcome if students practice the concept in a fun and engaging way! The game ensures active student participation through which your child will practice more on the concepts of place value. This game requires learners to work with numbers within 1,000 where ...

The game will help your young mathematician to practice more on the concepts of place value. Learners will use their understanding of standard form to identify the correct answers. Students will need to identify the numbers using the expanded form.

Building a strong foundation in place value is an important step in helping your child become proficient and confident. The game involves numbers within 1,000. It is important for students to gain confidence in a concept by working at different levels of complexity. This game requires learners to fi...

Boost your child's understanding of place value with this game. The game is about solving a set of problems of varying difficulty levels and by doing so, your young mathematician will practice more on the concepts of place value. Students will write the expanded form of the given numbers as they att...

Make a Number Using Hundreds, Tens, and Ones

The little aliens are waiting by their rocket ships. They would like to go to their home planets to meet the other aliens. Are you ready to adjust their ship numbers and fly them home? Here your young mathematician will learn the concept of place value. Students will understand the meaning of expand...

Build a Number Using Hundreds, Tens, and Ones

This fun game will teach your little one everything about addition and subtraction. Is your little kid ready to send the aliens back to their home planet? The game requires students to work with a set of problems on place value and use their conceptual understanding to make a number. This set of pro...

Guess the Number From Place Values

Kids often develop misconceptions about concepts in mathematics, including place value. It is important to help them get over those misconceptions. Here the rigor is beautifully balanced by asking students to work with numbers within 1,000. What better way for your second grader to learn than to hav...

Usually, preschool math curriculum is all about counting and shapes. Early childhood education should be started with the objects that the kids see around them using educational games and math activities for kids. Grade 1 students learn about what is place value using math manipulatives and place value activities. Place values play an important role in mathematics. In grade 1 they comfortably work with two-digit numbers and their place values. In grade 2, they graduate to the place values of three-digit numbers. For this groupable math aids like snap cubes as well as pre-grouped objects like base ten blocks can be used. Several math games for 2nd graders available online can reinforce the concepts learned.

First graders get familiar with place value definition using learning games for kids. They are introduced to the system using place value games and activities. The kids learn to unitize ten individual units to a single unit called “ten”.  Further, they use the place value strategies for addition and subtraction of two-digit numbers.

In grade 2, the kids further expand the place value system to the hundreds.

Children conceptualize a “hundred” as a bunch of ten “tens” using math manipulatives. 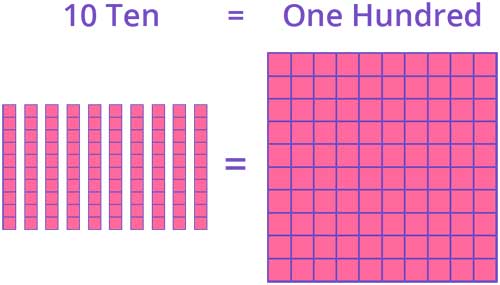 They already know place value definitions and have a clear concept about the connection between tens and ones. So, they do the counting initially by grouping the objects into groups of 10 and the left overs.

After identifying the numbers of hundreds, tens and ones in a number, the kids are ready to analyze the value of each digit in a number. Using math manipulatives they can represent a three-digit with the correct place value. 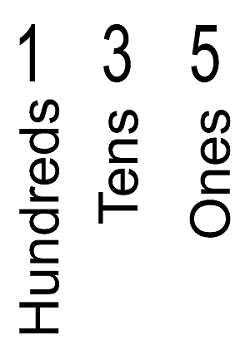 Given a number, the child can understand the value of each digit as well as the digit at each place value.

A mere Google search of “place value worksheets 2nd grade” can get you ample of math websites and math practice problems. SplashLearn’s the worksheets for representing three-digit numbers would reinforce the connection between the visual models, number form, and the standard forms of numbers as well as identifying the number of hundreds, tens, and ones in a number. Further, the math problems under the section understanding place value help children to expertise in identifying the value of each digit in a number and understand the concept deeper.

Just the way children unitized ten ones into a ten, in grade 2 they learn to compose ten tens to form a hundred. They realize that in a ten there are zero ones. In a similar way, they conceptualize that there are zero tens and zero ones in a hundred.

For example, when the number 300 is modeled using base 10 blocks, there are 3 hundred blocks, zero ten blocks and zero unit blocks. 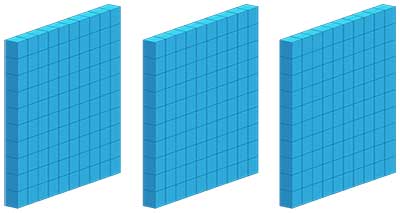 Grade 2 kids are familiar with various representations of two and three digits numbers as number form, standard form, split form(the number 135 as 1 hundred 3 tens 5 ones) and visual models. Also, the children are thorough with the concept of the value of a digit in a number. These act as a foundation for writing a three digit number in expanded form.

The students are familiar with counting up to 1000. So, like the comparison of two-digit numbers, the comparison can be done using the logic that the number that comes later in counting is of greater size. Probably this would be the logic used by kids of grade 1.

But let us look at the technical side of it too.

For comparing two three-digit numbers, the more the number of hundreds greater the value of the number. So, first, you need to compare the digit at the hundred’s place.

Now when there are two numbers with the same number of hundreds, you need to consider the number at ten’s place next. Whichever number has the greater value at ten’s place, is a greater number in this case.

When the digits at ten’s place are also the same, it is obvious that the decision should be made considering the ones.

Children need a numerous number of experiences verbally comparing two sets of objects using comparison vocabulary of less than (<), greater than (>) and equal to (=). This will help them connect the vocabulary to math symbols. SplashLearn has a good number of math worksheets for comparing the three-digit numbers.

In grade 1 kids learned how to add a multiple of 10 to a two-digit number. In grade 2, they learn to add any two 2-digit numbers. But the standard algorithm of addition with carrying is not expected at this level. Rather, they use logical reasoning for adding two 2-digit numbers. The kids might adapt one of the below-described reasoning to find the sum.

By using reasonings like these children learn to add any two 2-digit numbers.

Children continue to use similar reasoning techniques instead of standard algorithm even when there are four numbers.

Place value strategies of adding tens together and ones together is the main technique used here. To find 23 + 62 + 54 + 48,  first add the tens.

Another technique that can be used is to add the numbers in the convenient order.

Two numbers have 2 and 8 at ones place which will add up to 10. So, add those two numbers first.

Now, add the next number. 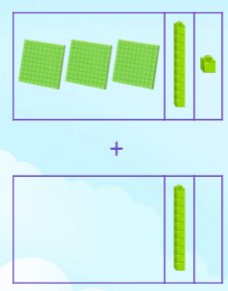 When the addition is between two 3-digit numbers similar techniques can be applied. 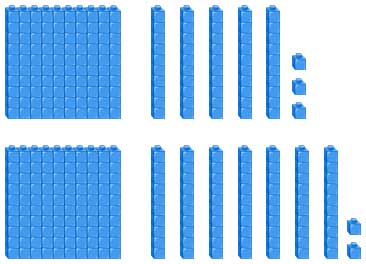 The similar blocks need to be added together. There are 5 tens in the first number and 7 tens in the second, adding up to 12. But 12 tens is equivalent to 1 hundred and 2 tens. So, there are three hundreds altogether, 2 tens and 5 ones. Thus, the sum is 325.

Using the place value strategies this can be done algebraically by writing the number in the expanded form adding the similar place values together.

For subtracting a two-digit number from another one, again they can be decomposed into tens and ones, and the corresponding place values can be subtracted. For example, consider 35 – 14. There are 3 tens in the first number and 1 ten in the second. Subtracting you have, 2 tens. Similarly subtracting the ones, you have 1 left over. Thus, the difference is 2 tens and 1 left over or 21.

When it comes to subtracting three-digit numbers, using base ten blocks might help students to visualize the concept of taking away as well as decomposing.

Start with the base ten block for the minuend 526.

Now the subtraction can be performed by taking away blocks equivalent to the subtrahend 389. There are 3 hundreds in 389, so first take away 3 hundreds.

Now, there is 226 in the minuend and 89 in the subtrahend. The number of tens in 226 is two, there aren’t enough to take away 8 tens. So, the solution to this problem is to decompose one of the hundreds into 10 tens. Here, the child needs to trade 6 tens out of the new 10 tens as there are already 2 tens available. So, in the minuend, there are 1 hundred 4 tens and 6 ones are available from where the child needs to take away 9 ones.

Again, one of the tens needs to be decomposed to ten ones to take away 9 ones. Here, the child needs to trade 3 ones out of the new 10 ones as there are already 6 ones available. So, in the minuend left are 1 hundred 3 tens and 7 ones which are the difference.

Further, after quite a number of practices of place value strategies and pre-grouped manipulatives like base ten blocks, children learn to calculate the addition and subtraction of 10 or 100 as mental math. That is the questions like, “what do you get if you add 10 to 358”, the child realizes that 10 needs to be added to the tens in 358 and thus the answer is 368. In a similar way, they learn to add or subtract 100 too. That is,

. The child concludes that when one adds or subtracts 10 or 100 that only the tens place or the digit at the hundreds place changes by 1.