15+ Best Group Games For Kids To Keep Them Entertained 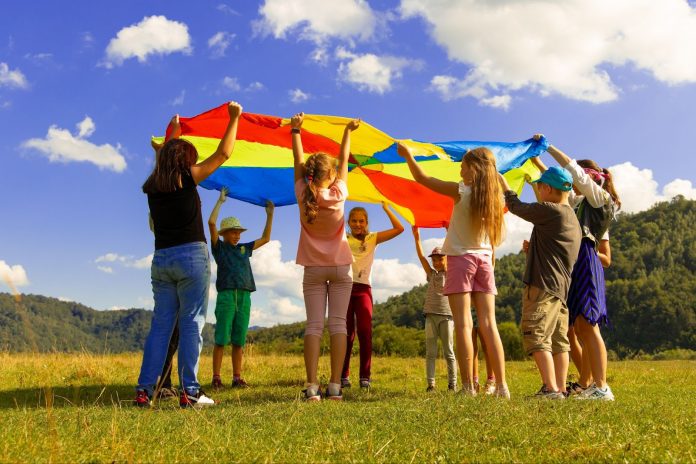 Group games are one of the best ways to engage kids and keep them entertained. Group games for kids are not just a fun way to spend time with them but also contribute to building communication and social skills in them. So if you’re looking for the absolute best games to play with a group of kids or your students, we have just the right list of fun group games for kids: both indoor and outdoor!

Indoor group games are perfect for days when it is raining outside or it is too cold to step out to go to the playground. Make the most of your classroom or an indoor court with some fun group games.

Things You Need: Random objects like toys, a ball, a towel, etc.

Things You Need: A timer and a list of topics

Things You Need: Glue, tape, newspapers, clips and other arts and crafts materials of your choice

Things You Need: Chairs and space

For example, if the chosen activity is eating and the chosen random word is “dolphin,” the answer to the question “Where do you do this activity?” is “I dolphin at school, home, and sometimes, outside.”

Things You Need: Some space

There’s nothing better than the sun, some dirt, and a few lessons on group building and socializing on a warm, breezy day. Teach your kids or students some valuable lessons on social skills with these amazing outdoor group games:

Things You Need: Paper and pen

Alt text: Kids playing with a ball in a park

Children’s brains are always developing and adapting. It is very important to expose them to real interactions outside of their homes and classrooms to enable them to learn how to socialize and navigate through the world. Even when they’re learning in a classroom, their interaction is limited since the focus stays on reading, writing, and speaking. Group games also help kids to gain confidence, have an improved self-esteem and increased focus. Here are some advantages of group games for kids:

This is one of the most important skills kids will use in adult life. According to a study on cooperative learning effects on group work of children in Grade 1 of primary education, cooperative learning leads to an improved group work behavior in children. Interacting with their peers in a team gives them a sense of team building and belongingness.

Group games that require kids to run around and challenge them physically keeps them active. These games not only help them redirect their energies into something productive and fun but also lays a foundation of an active lifestyle in their adult life.

Group games enable children to socialize and navigate in social situations better. The more they get to participate in groups, the more confident they get in socializing and team work. Kids group games also enable children to gain a sense of pride and achievement when they win a game along with their team thus boosting their confidence.

According to Cambridge English, playing games helps children to participate, engage, get a sense of achievement and recall their learning better than in a classroom setting. This helps to make them more confident and build their self-esteem.

Which game is the best for a group of kids?

Depending on where you are, how many kids are in the group and their age group, and the materials you have, you can choose to play games like Awesome Architects, Hide and Seek, You’re It, and Red Light Green Light.

What games to play with a group of five-year-old kids?

Some great games you can play with a group of five-year-olds are Cat & Mouse, Duck Duck Goose, Look Up Look Down, and Blind Man’s Buff.

What do you play with a large group of kids?

Games like Charades, Bite The Bag, Back Up, Cherry Bag, and Back Draw are great to keep a huge group of kids entertained for a long time.

15 Best Music Games for Kids That Mix Learning With Sounds

Amy Gill
Amy Gill is a Contributing Editor at SplashLearn. As a former teacher, she likes to write about education reforms, edtech and how to make learning more fun for children.
Explore 8000+ Games and Worksheets
Try for free