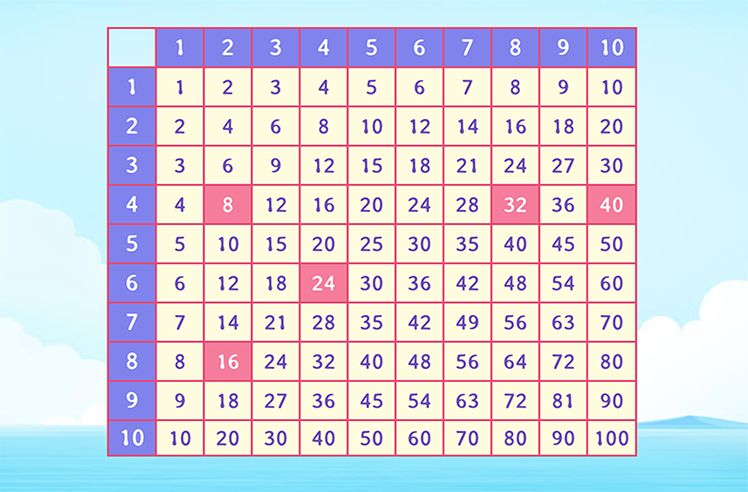 The game is about finding multiples of a number by using the multiplication chart as a tool. Students will interact with the model to record their responses. Your fourth grader will develop the required confidence by solving a variety of problems on finding multiples. 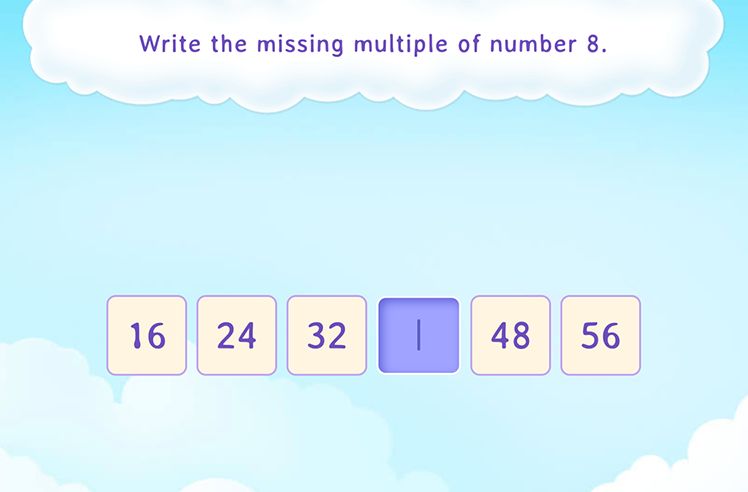 Fill in the Missing Multiples 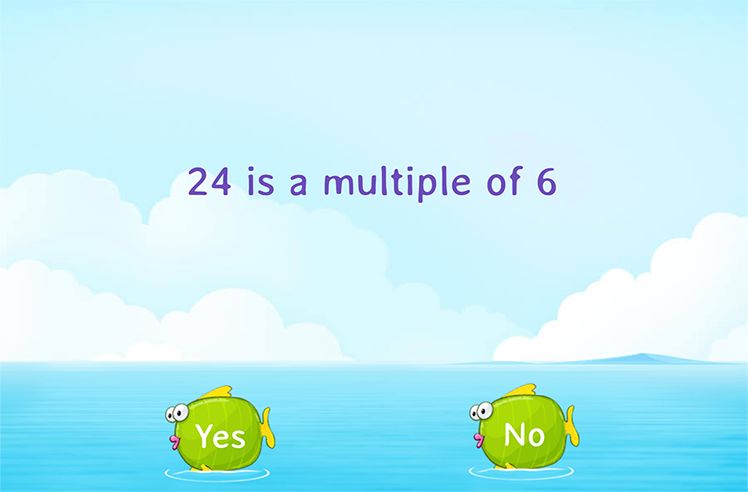 Choose Whether True or False

Kids often develop misconceptions about concepts in mathematics, including multiples. It is important to help them get over those misconceptions. The game requires students to recall concepts related to multiples and find whether the given number is a multiple or not. This game will nudge your fourt... 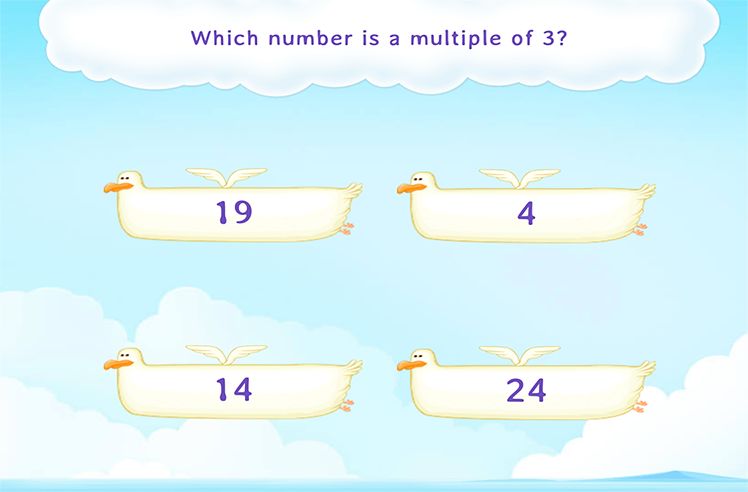 The game challenges students to solve a set of problems on finding multiples. These engaging problems encourage them to apply their prior knowledge of the topic and find the answer. Students will select the correct option to mark their responses. Regular practice will help your fourth grader develop... 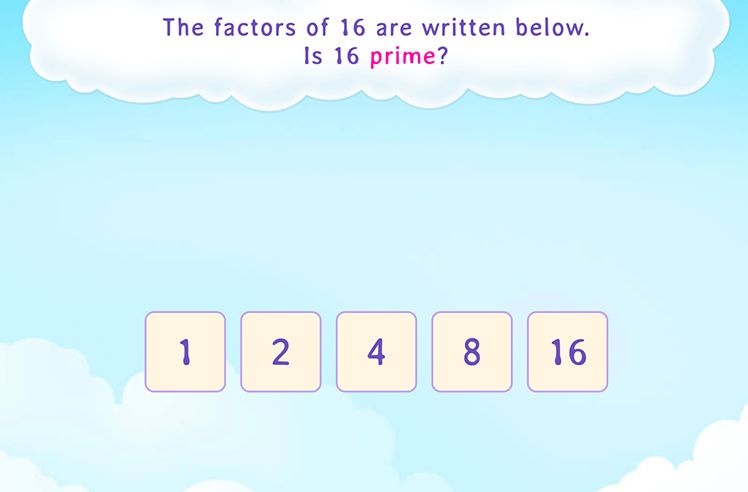 Choose the Prime Number Out of the Given Numbers

Help your child become fluent in algebra with the help of this super fun game. There are misconceptions that are often associated with prime numbers, but those can easily be put on the back burner with regular and targeted practice. The game will help your young mathematician to practice more on the... 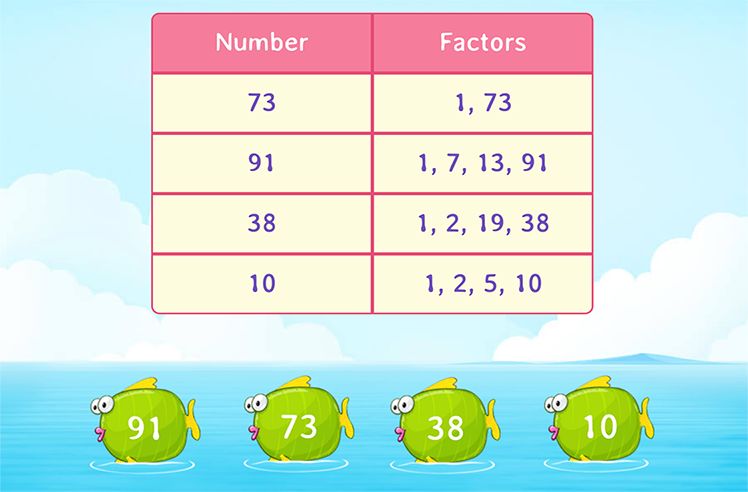 Building a strong foundation in algebra is an important step in helping your child become proficient and confident. The game involves identifying prime numbers from the given information, which helps young learners solidify their understanding of the concept. This game will help your fourth grader p... 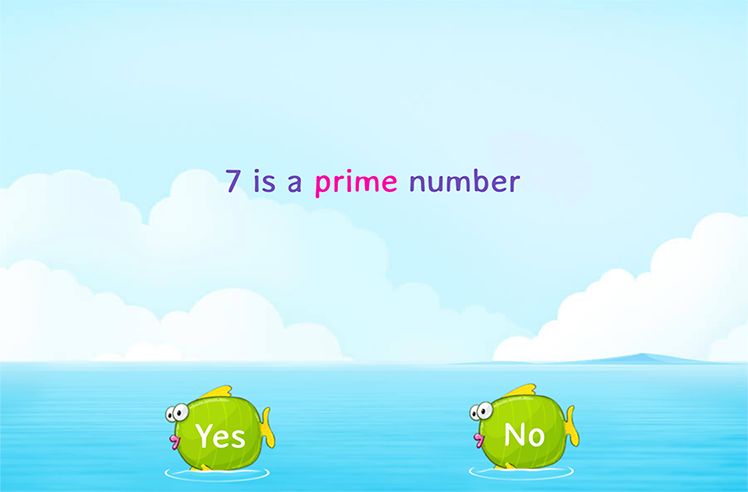 Identify the Type of Number

The game encourages students to apply their understanding of numbers to find the answer. The game requires learners to answer whether the given number is a prime or a composite number. Designed for fourth graders, this game can help your child become an expert in the concept of prime and composite n... 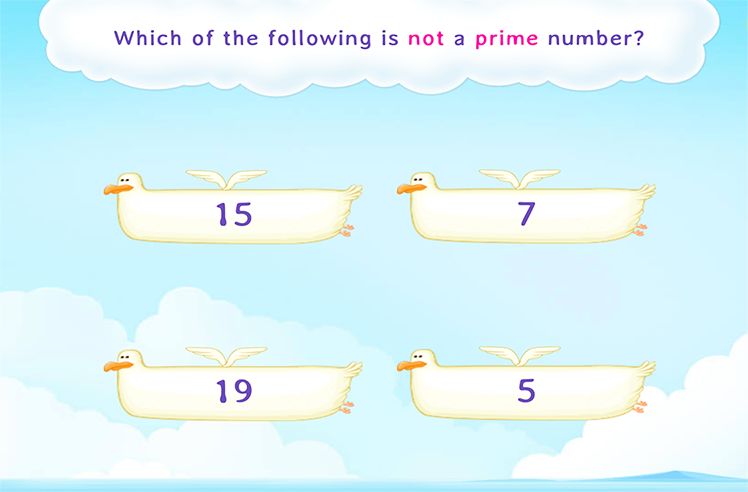 Identify the Number Which is Not a Prime

Help your child learn algebra in an efficient manner with this challenging game. Concepts like prime numbers can be confusing for kids, but with practice they can gradually get more comfortable. The game is about finding numbers that are "not" prime and by doing so, your young mathematician will pra... 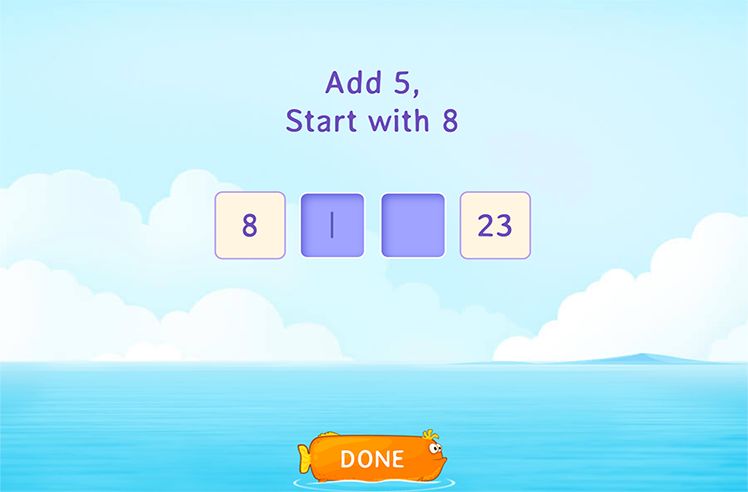 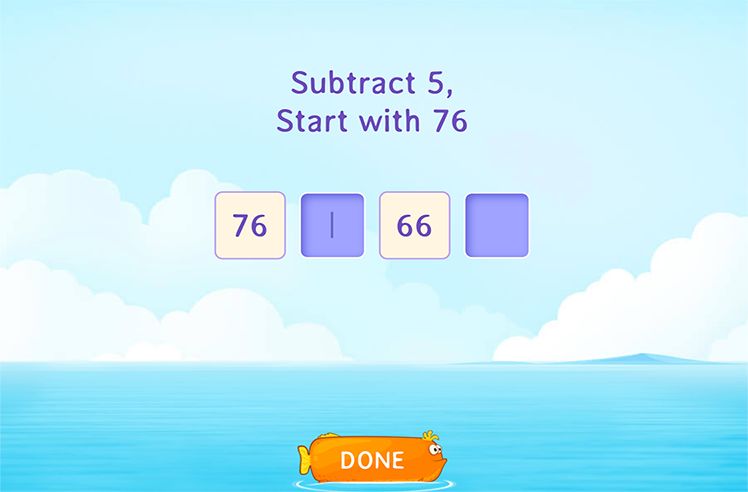 Give your child food for the mind with this game on algebra. Students' struggle with algebra is often attributed to a lack of adequate practice. Timely and effective practice with a focus on fundamentals will help your child become more proficient in algebra. The game requires learners to work on su... 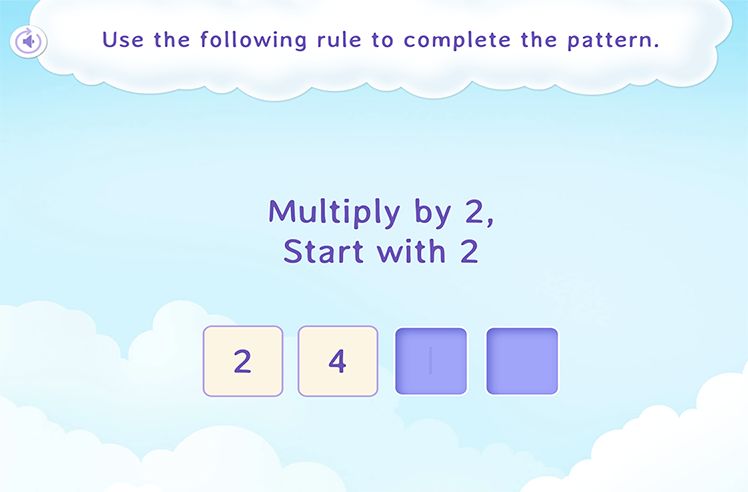 Struggles with algebra can be easily overcome if students practice the concept in a fun and engaging way! The game challenges young mathematicians to hone their math skills by solving a set of problems on multiplicative patterns. This game will nudge your fourth grader towards mastery and develop th... 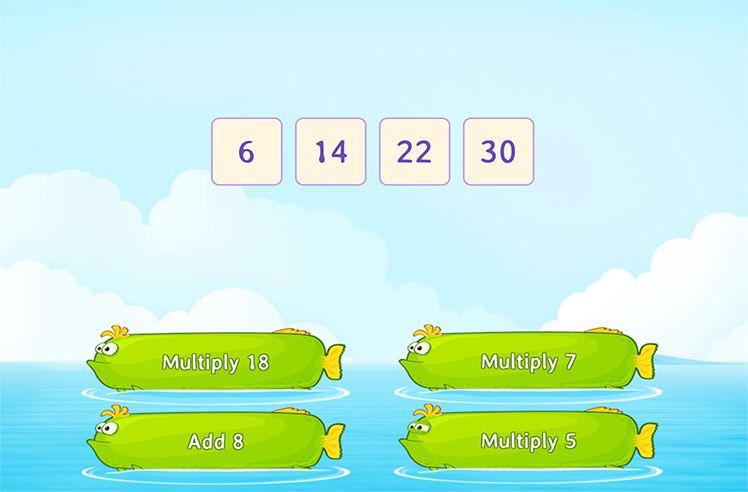 The game invites learners to work with a set of problems on number patterns and find the answer. Students will need to analyze and select the correct answer from a set of given options. Regular practice will help your fourth grader develop confidence in the classroom and in the real world.

All Algebra Games for 4th Graders 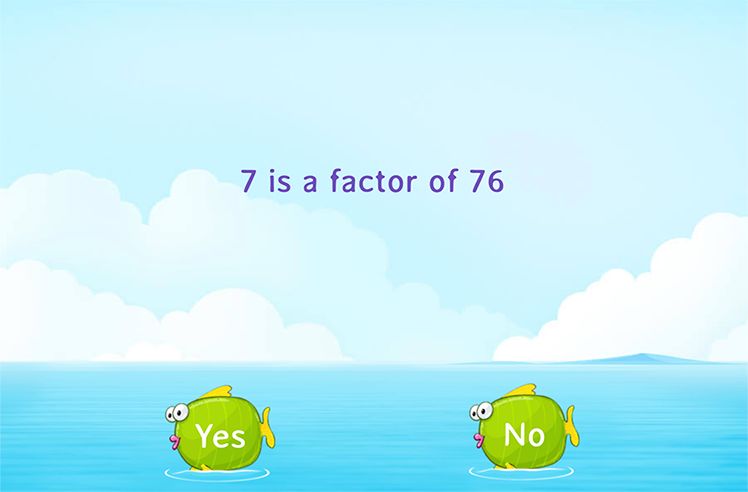 Identify If True or False

Build your child's algebra skills with this game. Students' struggle with algebra is often attributed to a lack of adequate practice. Timely and effective practice with a focus on fundamentals will help your child become more proficient in finding factors of a number. The game requires students to a... 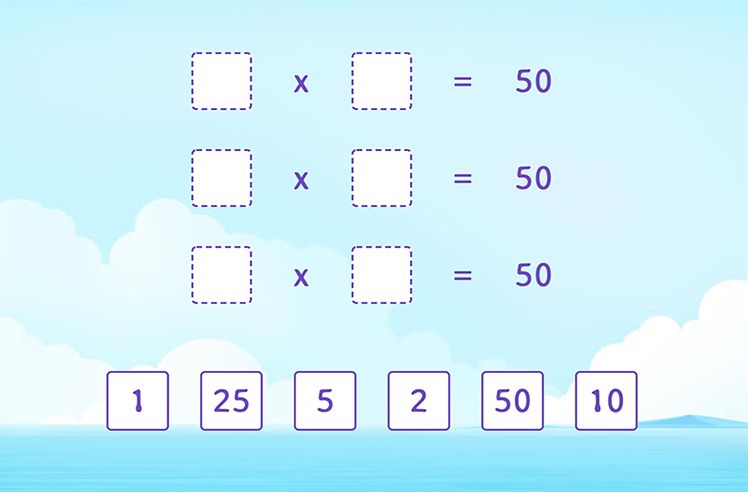 Complete Factor Pairs for a Number

Struggles with algebra can be easily overcome if students practice the concept in a fun and engaging way! The game encourages your young mathematician to complete factor pairs of a number. What better way is there for your fourth grader to learn than to have fun while learning? This game will stimul... 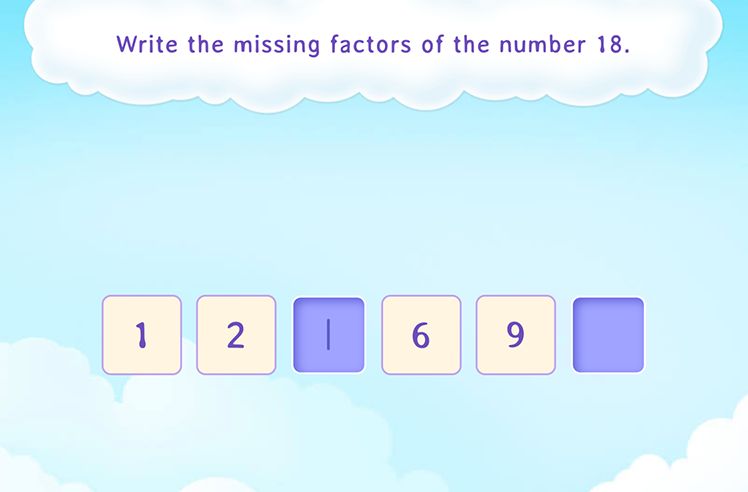 Fill in the Missing Factors

The game gives students an opportunity to apply the concepts of factors and multiples. Students will be required to fill in the missing factors of a given number. Help your fourth grader become proficient in algebra with this game. 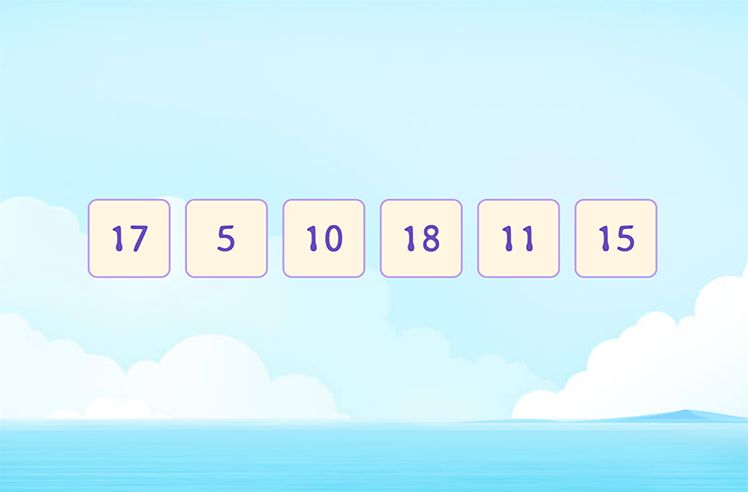 Select All the Prime Numbers

Kids often develop misconceptions about concepts in mathematics, including algebra. It is important to help them get over those misconceptions. The game requires students to select prime numbers from the given set of numbers. Your fourth grader will have an exciting time playing this game. 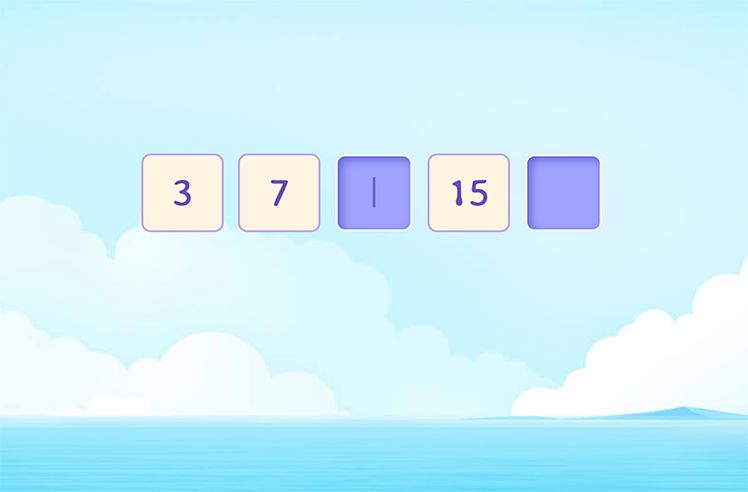 Fill in Numbers According to the Number Pattern

Improve your child's proficiency in algebra with this game. There are misconceptions that are often associated with concepts like number patterns, but those can easily be put on the back burner with regular and targeted practice. The game consists of problems of different structures and by solving t... 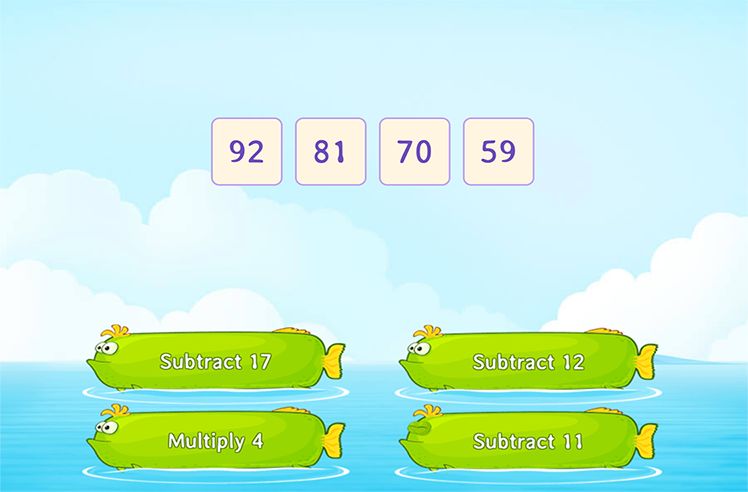 Building a strong foundation in algebra is an important step in helping your child become proficient and confident. The game requires students to recall concepts related to number patterns and find the answer to move towards mastery in the topic. What better way is there for your fourth grader to le... 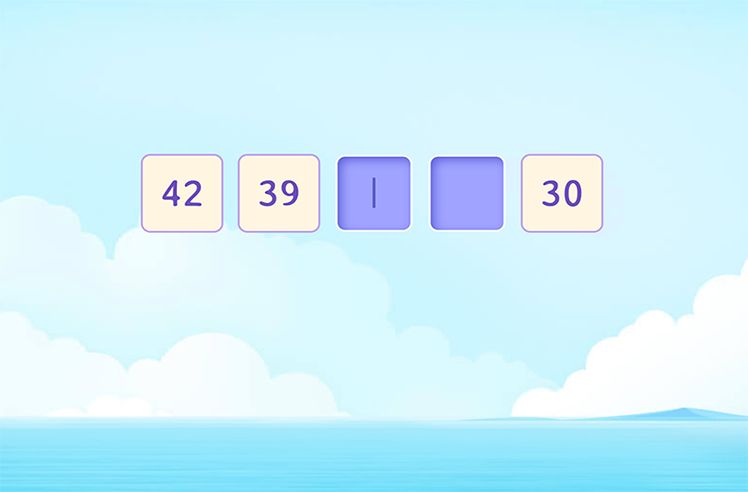 Identify the Pattern and Fill the Correct Number

The game challenges students to solve a set of problems on number patterns. These engaging problems encourage them to apply their prior knowledge of the topic and find the missing number. Students will need to fill in the given blanks to complete the tasks. Help your fourth grader become proficient ... 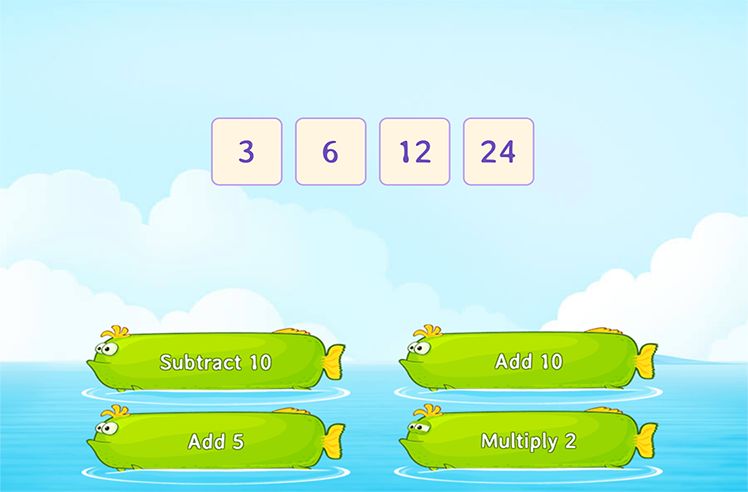 Recognize the Pattern in the Number Sequence

Nudge your child towards mastery in algebra with this super fun game. Concepts like number patterns can be confusing for kids, but with practice they can gradually get more comfortable. The game requires students to complete a set of challenging tasks and the students practice more on the concepts o... 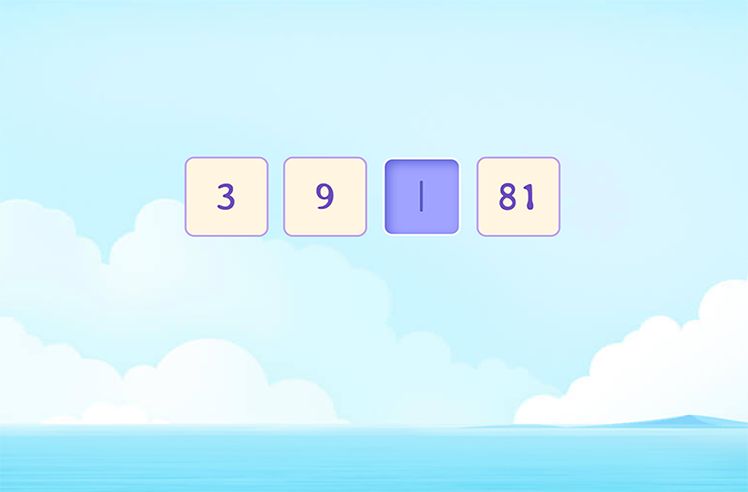 Kids often develop misconceptions about concepts in mathematics, including algebra. It is important to help them get over those misconceptions. The game encourages your young mathematician to use their understanding of number patterns to find the missing number. This game will help your fourth grade...

Why Is Algebra Important?

Algebra is sometimes referred to as generalized arithmetic because it formalizes arithmetic relationships. Its power lies in the ways it allows us to represent relationships among quantities, to describe properties of operations (such as commutative and distributive), and to describe patterns. Basic algebra rules provide for manipulating symbols, such as simplifying and translating algebraic expressions and then solving for an unknown. Reasoning algebraically is essential to the study of other domains of mathematics, including algebraic geometry, measurement, probability, and data analyses. The algebraic reasoning is also needed in the sciences, the social sciences, and the arts. Earlier, algebra instruction was reserved for older students and focused primarily on the manipulation of algebra symbols and the solutions to basic algebra problems, but today, realizing its significance, elementary algebra is introduced to younger kids with more focus on the "big ideas" of algebra and on reasoning algebraically.

There are three big ideas of algebra to tackle. Although these big ideas of abstract algebra are explained individually, they often appear in simple algebra problems in combination.

A variable can be an object, a geometric shape, or a letter that represents a number of things. Variables are used in three ways- to represent unknowns, to represent quantities that vary, and to generalize properties.

Unknowns are variables that don't vary! That is, they have fixed values. Variables with fixed values are used extensively in equations in the early grades, for example,3 + 2 = n and t + 3 = 7. Kids learn that the same letters or shapes in equations represent the same values.

Following is a fun activity for kids to demonstrate the same:

Children are shown two pictures. In one picture, there are two identical toy cars with a price tag of $2 for both toys. The second picture shows the same toy car and a toy dog with a price tag of$5 for both toys. This problem is their introduction to solving algebraic equations with two unknowns; the two equations are car + car = $2 and car + dog = $5. The unknowns are the price of the toy car and the price of the toy dog. Children will learn in grade 5 how to solve algebra word problems that involve first writing algebraic expressions to represent the mathematical relationships and then solving algebraic expressions for the values of the variables.

In some types of algebra equations, the variables are not fixed. The variables can assume different values. Children can be introduced to the concept of variables as 'representing varying quantities as early as the preschool level and then how to solve algebra problems in later years.

One of the best math aids to illustrate this is the following math activity:

Children are presented with two cups (call them a and b) and 10 chips. Then they are asked to find all different ways in which they can place the chips into the cups. This problem can be represented algebraically by writing a + b = 10. A and b vary because they can have lots of different values. For example, if a = 0, then b = 10; if a = 1, then b = 9; if a = 2, then b = 8; and so on. Not only do children learn that there are 11 different pairs of values that solve the equation, but they also learn that once they choose a value for a, the value of b is determined. Similarly, if they select a value for b, then the value of a is determined. 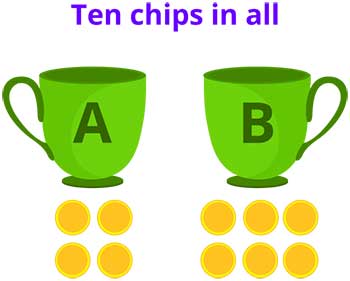 Variables that take on different values are found in all algebra formulas. Consider the formula for the perimeter of a square. In the formula p = 4s, where s is the side of the square. Now the value of s may be different for different squares.

Children are introduced to special relationships that exist among sets of numbers under specific operations. Children are expected to learn these facts so that the computations are simplified.

Using variables provides a shorthand way of describing relationships that apply to all numbers in a set.

Children should investigate numerical and geometric patterns and express them mathematically in words or symbols. They should analyze the structure of the pattern and how it grows or changes, organize this information systematically, and use their analysis to develop generalizations about the mathematical relationships in the pattern.

An example of a growing pattern is 1,3,5,7,9, … each element in the pattern is two more than the preceding element.

The same can be taught through a fun activity for kids. Show them the following image:

Children should be encouraged to explain these patterns verbally and to make predictions about what will happen if the sequence is continued.

Fun math activities for kids like these give opportunity to engage them in thinking about how to articulate and express a generalization—"how can we talk about how this pattern works for a square of any size?" grade 4 kids should be able to predict the next element in a sequence by examining a specific set of examples. By the end of fifth grade, students should be able to generalize by reasoning about the structure of the pattern.

In intermediate algebra, kids can also investigate properties like commutativity, associativity, and distributivity of multiplication over addition. Is 3x5 the same as 5x3? Area model can help children discover these questions. For example: 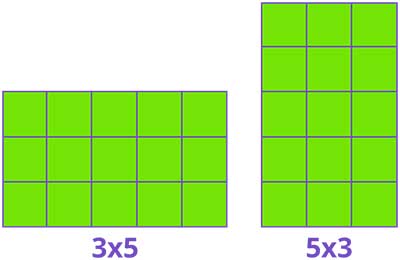 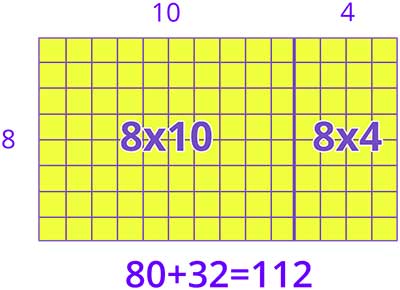 Another mathematics activity that can be done with kids is to show the child a pattern of constructions made from cubes like this:

In the study of measurement, when children know that there are 4 cups in 1 quart, they can reason that there must be 8 cups (2 x 4) in 2 quarts, and 12 cups (3 x 4) in 3 quarts. In this process, the child is reasoning proportionally. When students construct equivalent fractions and when they use the key on a map to figure out actual distances between cities, they are reasoning proportionally.

In grade 4, basic algebraic ideas should emerge and be investigated because children—