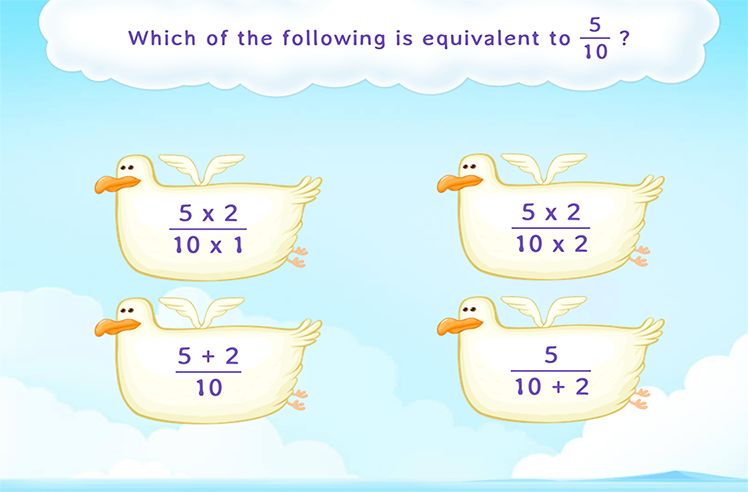 Struggles with equivalent fractions can be easily overcome if students practice the concept in a fun and engaging way! The game requires students to work with a set of problems on equivalent fractions and use their conceptual understanding to find the correct expression. What better way is there for... 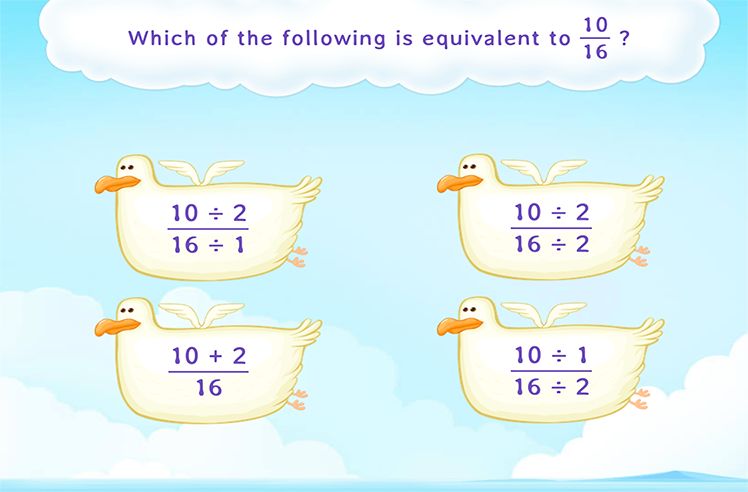 The game gives students plenty of opportunities to work with problems based on equivalent fractions. They are encouraged to apply their mathematical knowledge to find the answer. Your young mathematician will learn to choose the equivalent fraction in this game. Students will tap on the interactive ... 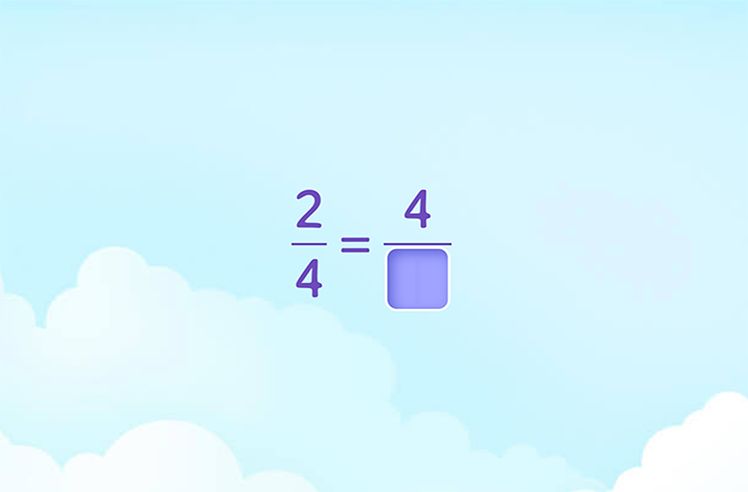 Multiply and Complete the Equivalent Fraction

Give your child food for the mind with this game on equivalent fractions. There are misconceptions that are often associated with concepts like equivalent fractions, but those can easily be put on the back burner with regular and targeted practice. The game is about multiplying and generating equiva... 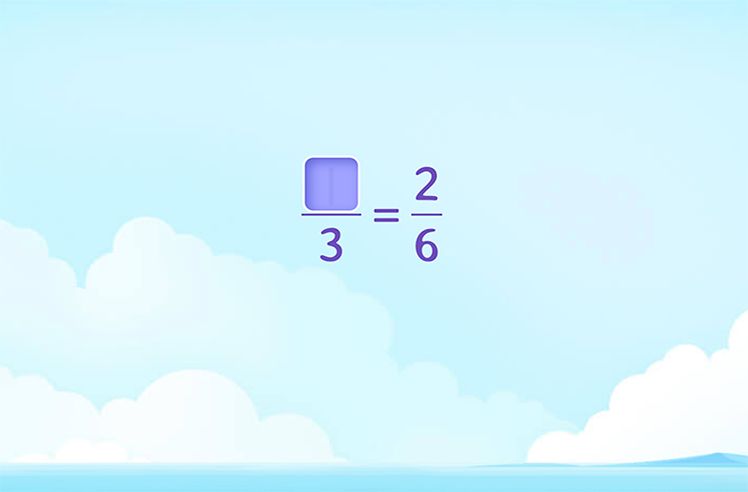 Divide and Complete the Equivalent Fraction

Building a strong foundation in equivalent fractions is an important step in helping your child become proficient and confident. Here your young mathematician will practice more on the concepts of equivalent fractions. This game will help your fourth grader learn to divide and generate equivalent fr... 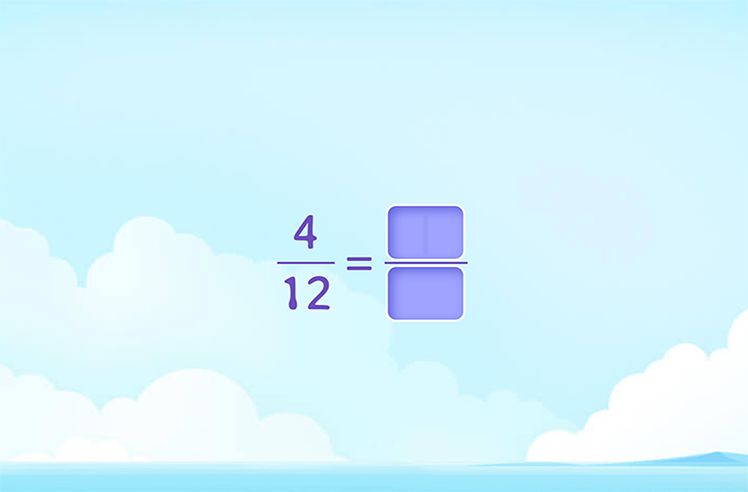 Fill the blank to make an Equivalent Fraction

The game consists of problems of different structures and by solving them, the students practice more on the concepts of equivalent fractions. The student will fill the blank to make an equivalent fraction in this game and by doing so, your fourth grader will become proficient and confident in the c... 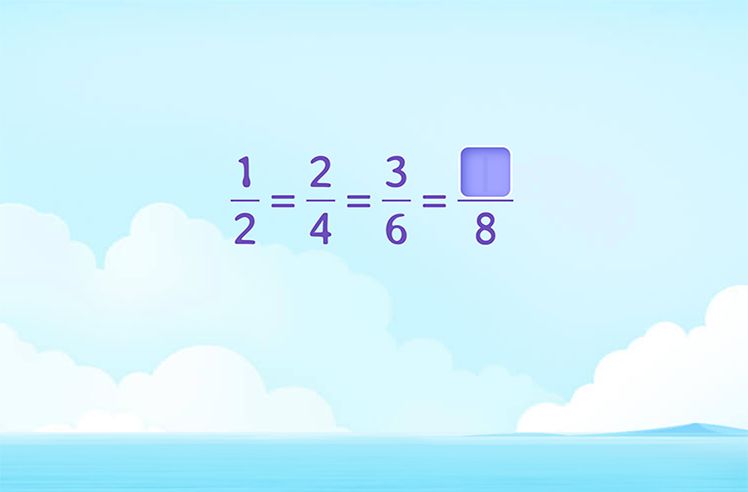 Fill in to Complete the Equivalent Fractions Pattern

Improve your child's proficiency in equivalent fractions with this game. Concepts like equivalent fractions can be confusing for kids, but with practice they can gradually get more comfortable. The game requires students to complete the given pattern by using equivalence, helping the students practi... 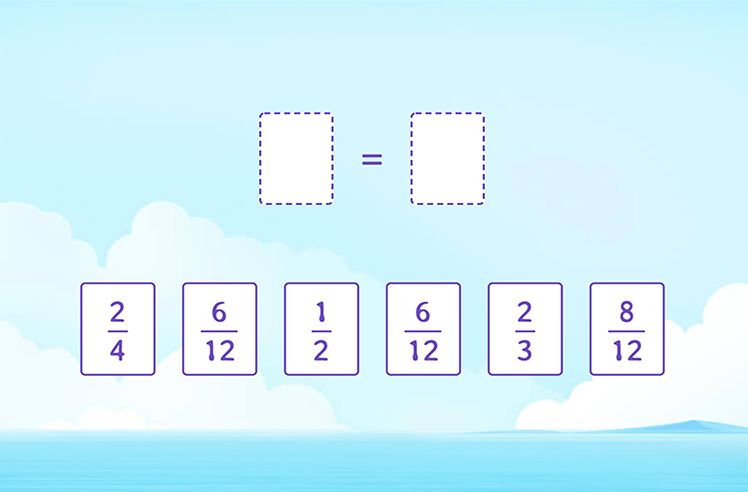 Select a Pair of Equivalent Fractions

Some fractions even with different numerators and denominators have the same value.

. Though the denominators and numerators look different, the value of both the fractions is the same. They are called equivalent fractions.

Consider a pizza cut into half, another one into 4 slices and the third one cut into 8. Eating a slice from the first pizza is equivalent to eating two slices from the second and eating four slices from the third. That is, the pizza fractions calculated any of the three ways is the same.

That is, the unit fraction

, and again equivalent to

The below discussed math manipulatives would help to understand the concept of equivalent fractions for fourth graders.

1. Fraction Charts / Fraction strips: This is one of the most commonly used manipulative for learning fractions. 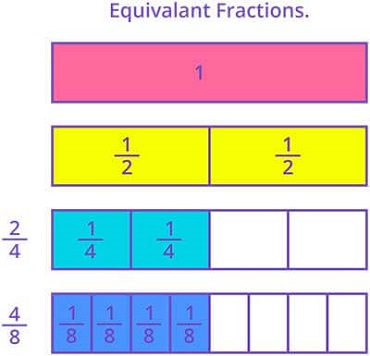 The definition, as well as the equivalence of fractions, can be explained using fractional strips. Children can make such equivalent fractions chart using multicolored chart papers. As they do the activity by themselves, they enjoy independent learning the as well as the concept gets reinforced.

2. Area models: These are another similar math manipulative for teaching fractions.

The area covered by the shaded portion of each circle is the same, though the number of parts of the whole is different. The equivalent fractions reduce to

if you simplify fractions given in the area models.

3. Fractional Strips for Tenths and Hundredths or Base Ten Blocks:


Fractional strips can be used to show tenths and hundredths as shown: 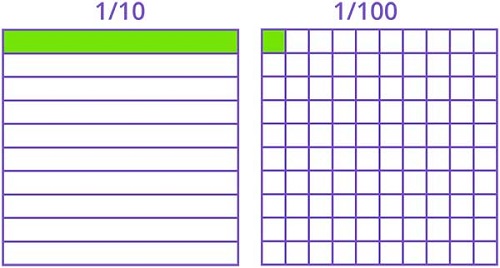 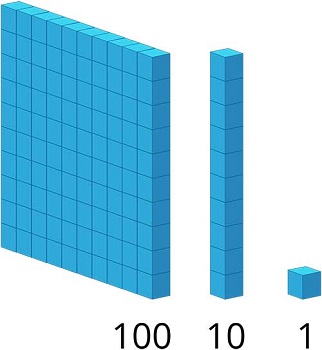 Once the concept of fractions is clear, the equivalence of fractions should be introduced using activities and fraction games for kids. A mere robotic repetitional practice can give children computational fluency. But for a better understanding of the topic, it should be demonstrated using real-life activities and math games.

Matching Equivalent Fractions: Given a set of fractions, the child can pair the equivalent ones. 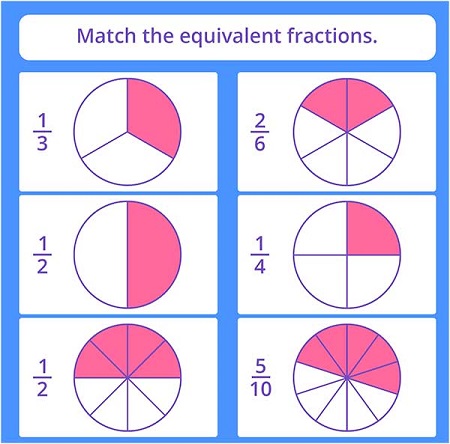 The difficulty level can be increased by giving the models without giving the fractions represented. Introducing timer in later levels would help children concentrate more and calculate faster. 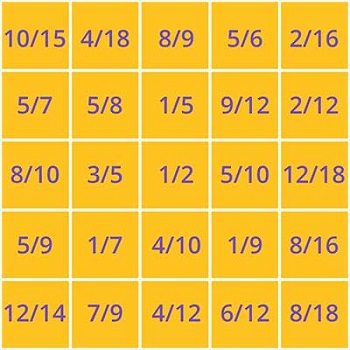 Each time a fraction is given to the child, on finding an equivalent fraction from the grid, it opens up. The child who first identifies the character behind the grid wins the game. The difficulty level of the game can be controlled by giving more complex fractions.

Two fractions are equivalent if they have the exact same size. 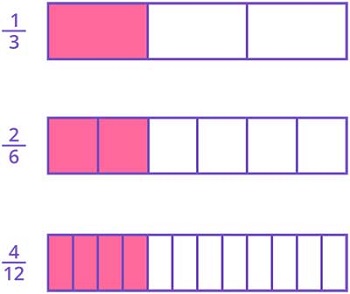 are equivalent fractions. The area shaded in all the three fractions are equal. Though they are expressed differently, the value of all the three is the same.

When these are represented using area models, the area covered by the first two fractions as a part of the same whole are equal. But for the third fraction, the area shaded is more than the other two. Thus,

is not equivalent to the other two.

are plotted on a number line, they occupy the exact same point.

Plenty of equivalent fraction calculators are available online. But this might not give a clear idea about the concept.

. This can be represented using area model as shown. 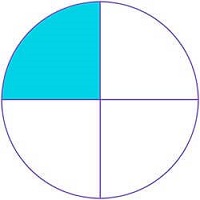 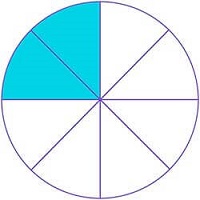 The circle is divided into 8 equal parts and the shaded parts are 2. That is, the above area model represents the fraction

and it is equivalent to the unit fraction

Further, if the whole is divided into 16 parts, you get an equivalent fraction 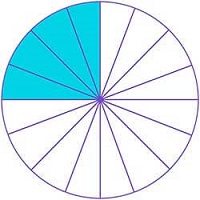 In a similar way when the divisions of a whole are merged together, the resultant is an equivalent fraction too. 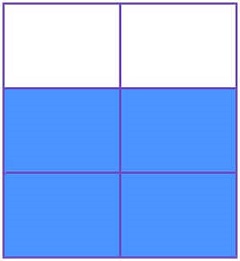 Here the whole is divided into 6 equal parts and 4 parts are shaded in blue. Now, merge the two rectangles in each row to get a bigger rectangle. 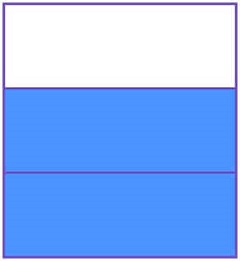 Now the whole is divided into 3 equal parts and 2 of them are shaded. So, the fraction represented is

But the area shaded in both are equal and thus,

The algebraic significance of this generation process will be discussed in the next section.

In the previous section, each subpart of the area model for the fraction

was subdivided into two. That is, the number of divisions in the whole is doubled. As a result, the number of parts that are shaded also doubles. Precisely, the numerator and denominator get multiplied by 2.

Similarly, if the numerator and the denominator get multiplied by 3,

Thus, the equivalent fractions can be generated by multiplying the numerator and the denominator with the same number.

In the second example, when the two rectangles in a row were merged to get a bigger rectangle, the division of the whole was reduced to half. That is, the numerator and the denominator were multiplied by

One way to add mixed numbers is to separately add the integral and fractional parts.

In this method, children have to be really careful if there is an improper fractional part after addition.

Now, the fractional part is an improper fraction. Convert it to an equivalent mixed number.

While subtracting mixed fractions, the chances of making mistakes are even higher.

When the integral and fractional parts are operated separately:

To avoid this, write the mixed numbers as equivalent improper fractions. A mixed number say,

, can be converted to an equivalent fraction as follows:

First, convert the mixed numbers to equivalent improper fractions. Make sure to follow math order of operations for the computations.

Now, convert the improper fraction back to the mixed number.

This method is more systematic and children tend to make fewer mistakes.

The subtraction problem can also be solved in a better way.

Convert the mixed fractions to improper ones. 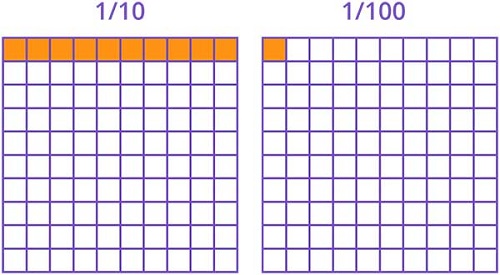 How to generate a fraction equivalent to

It can be generated by multiplying the numerator and denominator by 10.

That is, one-tenth is equivalent to ten-hundredths.

This can be represented using fraction model as shown: 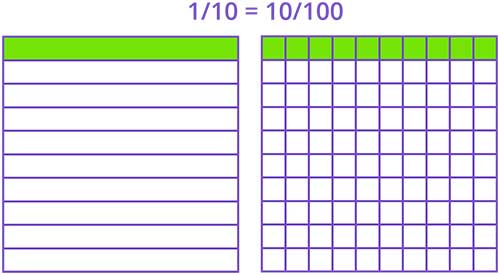 The converting fraction worksheets provided by SplashLearn has a handful of questions that models tenths and hundredths using fractional strips and their conversions.

Addition of tenths and hundredths:

Using the equivalent fractions tenths and hundredths, children learn how to add fractions with unlike denominators of 10 and 100.

For example, to find the sum of

Now the child has two like fractions to add.

Another skill learned at the level is comparing decimals based on their sizes.

One needs to realize that comparisons are valid only when the two decimals refer to the same whole.

First, the child needs to learn how to convert decimal to fraction.

Like whole numbers, decimals also can be written as a fraction with a denominator of 1.

So, converting decimals to fraction, they can be written as

Now, write the equivalent fractions of the two such that decimal points do not exist in the numerator.

For that, multiply the numerator and the denominator of the first fraction by 10.

Similarly, multiply the numerator and denominator of the second fraction by 100.

When you convert the decimals to fractions,

the two fractions do not have the same whole. To compare them, rewrite the first fraction.

Now, the two fractions refer to the same whole. Comparing the numerators,

Further, children use this principle to list decimals in ascending and descending orders.

To evaluate the equivalent fraction skills one can use the below assessment questions: