Children are fond of Mathematics for its logical reasoning power. Every step/calculations have a reason for doing it.  The subject becomes interesting when the child understands the reason behind each step.

Counting is a very natural concept that child can find the real-life examples around. The child gets introduced to counting in their kindergarten. Later, they learn to add numbers in primary classes.

Multiplication comes to picture as an extended addition by grade 3. Multiplying fractions is not an easy concept unless it is taught using good math manipulatives, activities and math games.

Fractions is a topic at an advanced level for kids, considering their grade standards. So, it should not be taught with just a pencil and paper method. Man manipulatives can give kids a better geometric understanding of the subject. This helps children to visualize things that they learn. Visual images formed in their memory help kids to understand the subject better. Below are some of the math manipulatives that can be used for multiplying whole numbers and fractions.

Fractional Strips/ Fraction Charts: Fractional strips are the most commonly used manipulative for teaching fractions. Using them, the child learns that multiplying fractions is a repeated addition of fractions.

The above fractional strip represents the multiplication

Pattern Blocks: Pattern blocks allow children to see how shapes can be decomposed into other shapes. 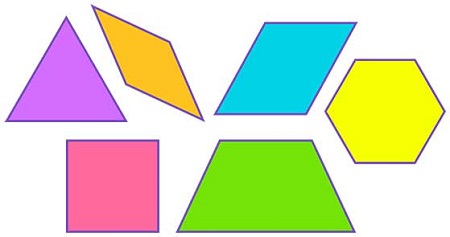 When one-sixth has to be multiplied by 3, three green triangles can be combined to make the red trapezoid. That is,

. Other shapes also can be used to show multiplication as an extended addition.

Relational Rods: Relational Rods are rectangular rods with related lengths. The below shown is a set of 10 rods, starting from one whole, that is, ten-tenth to one-tenth. 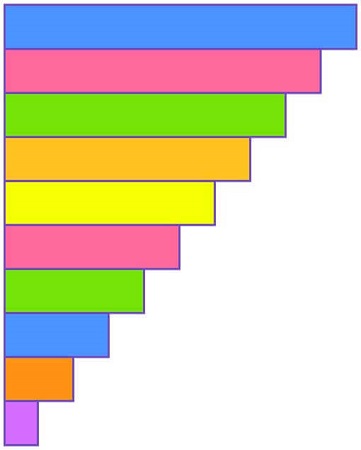 Similar to pattern blocks, relational rods also can be used to learn multiplication as an extended addition.

Though the manipulatives can give a more geometrical picture of the multiplication, adding math games for further practice would make things more interesting for kids. Below are some of the fraction games that can be used to reinforce the concept.

Multiplying Fractions with UNO cards: No. of Players 3-4

A shuffled deck of cards can be kept upside down. In each draw, a child gets to take three cards. With the three cards withdrawn, the child has to form a fraction and whole number such that the product is maximum. After each round, the child who got the highest fraction/whole number as the product wins the round. The game continues until the deck finishes.

Fraction Attack: No. of Players 1

This can be a digital game. A soldier has to cross mine lands with basic equipment. Each time the child answers a multiplying fractions question displayed on the screen correctly, the soldier is awarded an equipment that helps him to cross. If the answer is wrong, a mine gets exploded or the soldier gets attacked from surroundings. The difficulty level of the multiplication can be increased as the levels progress. The excitement to cross each level at the earliest would bring alertness and concentration in computing and they give the correct answer.

A snake and ladder game board can be used for this. All can start together at 1. A  fractional die can be rolled. The product of the outcome and the number at which a child is standing rounded off to the nearest whole number can be used to determine the child's next place. The game continues till one of them reaches the end. The other rules of going up and down are same as the original snake and ladder.

Apart from these, there are many online multiplying fractions calculator games that children can use for practice.

SplashLearn provides well-structured math activities for the math skills for K-5 curriculum based on common core standards. The basics fraction calculators are introduced with simple arithmetic practice problems. Children can connect word problems with fractions better to their day-to-day life. This will help in understanding the concept. Later multiplying fractions word problems reinforces the concept learned.

Children are familiar with multiplying one digit numbers. What do we do when we multiply two numbers, say 2 by 5? To multiply the number 2 by 6, we repeatedly add 2 for 6 times. That is,

The procedure is similar in fractions too. Multiplication is an extended addition.

Multiplication of a unit fraction by a whole number

In the above whole number multiplication example of

, what if the there is a fraction, say

Sheila wants to distribute muffins to her friends on the contributive party they organized. But her mom made way too big muffins so she had to cut each of them into 3. So, each serving of muffins had

of the whole. If 6 of her friends had muffins, how many muffins did she distribute?

can be represented as one portion shaded when the whole is divided into 3 equal parts. 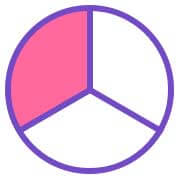 So, to find the number of muffins we would need to add

Adding fractions 6 times is equivalent to multiplying by 6,

To calculate this, arrange the shaded parts in consecutive one-thirds. That is:

So, the product is 2 wholes.

Algebraically how to add fractions?

Children are already familiar with adding fractions with like denominators. The rule is to simply add the numerator.

Thus, Sheila distributed 2 muffins in all.

This can also be calculated using a number line. Children are already familiar with marking fractions on a number line. Since the denominator of the fraction is 3, divide each whole on the number line into 3 equal parts.

is multiplied by 6, on a number line with each whole divided into 3, move 6 parts to the right. So, the product is 2.

Multiplication of a non-unit fraction by a whole number

lbs of dog food for his pet dog Godzilla in each serving. What amount of dog food is required for 7 servings?

Technically we need to add the amounts of food in all 7 servings. That is, add

In each of the addends, there are three-fifths of the parts shaded and there are 7 such addends.

Thus, the fraction multiplication represented is

Fractional strips in adding fractions calculators would arrange the shaded parts in the consecutive one-fifths as shown:

Thus, the product is

Each leap moves three-fifth of a unit to the right. Since the multiplication is by 7, after the seventh leap it reaches the product 4

To multiply fractions and whole numbers, the first step is to write the whole number as a fraction.

Grade 4 children are familiar with expressing whole numbers as fractions with denominator 1.

To write 75 as a fraction, write 75 as the numerator and 1 as the denominator. That is, the whole number 75 can be written as

In other words, multiplying

by 7 is same as finding three-fifth of the number 7. That is, when the whole number 7 is divided equally into 5 parts,

Now, write the fraction in the simplest form.

How to simplify fractions?

For simplifying fractions, the numerator and the denominator can be divided by the same number:

SplashLearn provides multiplying fractions worksheets for a thorough practice and a better understanding of the topic by repeated practice.