Understand 10 as a Unit Games for 1st Graders

We want to hear Eddie say "yaayy". Let's help him jump through the sky lands by counting right! The game consists of problems of different structures and by solving them, the stude...

Your child will practice place value in this fun game. There are misconceptions that are often associated with concepts like place value, but those can easily be put on the back bu...

Time to make the Oolzoos eat chili. Time to play with the numbers. Time for a super fun and delightful math sprint! The game requires students to complete a set of challenging task...

Count in Tens using Base 10 Blocks

Building a strong foundation in place value is an important step in helping your child become proficient and confident. The game provides learners with opportunities to work on a s...

Help your child become an expert in place value with this game. Concepts like place value can be confusing for kids, but with practice, they can gradually get more comfortable. The...

Select the Correct Multiple of 10

Kids often develop misconceptions about concepts in mathematics, including place value. It is important to help them get over those misconceptions. The game requires students to re...

Identify the Number of Tens

The game challenges students to solve a set of problems on place value. These engaging problems encourage them to apply their prior knowledge of the topic and find the number of te...

Which Number has the Tens

Your child will practice place value with this colorful game. Students' struggle with place value is often attributed to a lack of adequate practice. Timely and effective practice ...

Word Problems to Count by Tens

The game invites learners to work with a set of problems on place value and find the answer. The student will learn about word problems to count by tens in this game. Students will...

Word Problems on How many Tens

Struggles with place value can be easily overcome if students practice the concept in a fun and engaging way! The game gives students an opportunity to apply the concepts of place ...

Count Groups of Tens and Ones

The game requires students to use concrete objects to extract information and answer questions on place value. Your young mathematician will learn to count groups of tens and ones ...

How many Tens and Ones in Base 10 Blocks

Build your child's place value skills with this game. There are misconceptions that are often associated with concepts like place value, but those can easily be put on the back bur...

Identify the Number from Base 10 Blocks

Building a strong foundation in place value is an important step in helping your child become proficient and confident. The game ensures active student participation through which ...

Identify the Number with Tens or Ones

The game involves working with a set of problems on place value to find the answer, which helps young learners solidify their understanding of the concept. The student will identif...

Compose Numbers based on Tens and Ones

Help your child become fluent in place value with the help of this super fun game. Concepts like place value can be confusing for kids, but with practice, they can gradually get mo...

Identify the Number of Tens and Ones

Kids often develop misconceptions about concepts in mathematics, including place value. It is important to help them get over those misconceptions. The game encourages students to ...

Playing and learning have never been more fun, except with Oolzoos and bat! The Oolzoos are all ready to send blinky the bat home with their smart skills. Are you ready to help the...

Count by Tens and Ones

The game encourages students to use concrete objects to extract information and develop a solid understanding of place value. The student will count by tens and ones in this game. ...

How many Tens and How many Ones in Base 10 Blocks

Help your child learn place value in an efficient manner with this challenging game. Students' struggle with place value is often attributed to a lack of adequate practice. Timely ...

Which Number is Represented by Base 10 Blocks

Struggles with place value can be easily overcome if students practice the concept in a fun and engaging way! The game is about solving a set of problems of varying difficulty leve...

Blinky the bat and Oolzoos are ready for a little rockstar like you to join them in their adventures. Are you ready for some spicy fun? This game will help students decompose numbe...

Determine the Number with Tens or Ones

The game requires students to work with a set of problems on place value and use their conceptual understanding to find the answer. The game involves numbers within 50, it is impor...

Build a Number Using Tens and Ones

The little aliens are stranded away from their home planet. Can you calibrate their rocket ships and send them home? This game consists of smartly designed tasks to help your young...

Find the Number using Groups of Tens and Ones

Give your child food for the mind with this game on place value. There are misconceptions that are often associated with concepts like place value, but those can easily be put on t...

Determine the Tens and Ones in Base 10 Blocks

Building a strong foundation in place value is an important step in helping your child become proficient and confident. The game gives students plenty of opportunities to work with...

Compose and Decompose Tens to Make a Number

Blinky the bat is stuck and only you and Oolzoos can help him travel through the cave and reach home. Are you up for the challenge? The game has a set of problems logically crafted...

Find the Number using Base 10 Blocks

The game requires students to use base 10 blocks to extract information and answer questions on place value. The student will find the number using base 10 blocks in this game. The...

Compose and Decompose Tens and Ones to Make a Number

Hurdles, hurdles, go away. This little kid wants to play. Oozloos are ready to eat chili and Blinky the blat is ready to fly freely! The game strengthens students' problem-solving ...

Improve your child's proficiency in place value with this game. Concepts like place value can be confusing for kids, but with practice, they can gradually get more comfortable. Her...

Make a Number Using Tens, and Ones

Time to help the little aliens reach their home planet. Can you adjust the numbers in their rockets to fly them home? The game requires students to recall concepts related to tens ...

Mathematics works on logical thinking. This makes it interesting for small kids. And with the basic concept of counting, different shapes around them, estimating the measurements of the things they use etc make them feel connected to the subject. At this stage, it is very important to use fun math games for kids. Any topic should be introduced using good manipulatives.

For counting, groupable math manipulatives like cubes, links, beans, and beads can be used. It is not suggested to use pre-group materials like base ten blocks or bean sticks as these do not give freedom for kids to manipulate and learn things by their own. Further, a lot of kids learning games should be included for reinforcing the concepts.

By grade 1, they understand the relation between ones and tens. This can be explained using groupable materials like cubes, links, beans, and beads.

There are many different ways of grouping them. In whatever ways the kids group the beads, it counts to 35. For a first grader, the equivalence between these groupings is not very obvious. They need to be explained repeatedly using good math aids and educational games.

Another important way of grouping is 3 groups of 10 and 5 left overs. This grouping lays the foundation for the place value definition in mathematics.

It takes time for kids to get used to this system of counting, but once they are comfortable with it, they can count with much ease. In a number, if there are 5 tens and 3 ones, the child can write the number as 53 easily.

Suppose Saira has 10 chocolates with her and she wants to have 14. So, how many chocolates does she need to buy? The answer is 4. That is, she has 10 + 4 chocolates after buying 4 more.

Similarly, all the teen numbers (numbers from 11 to 19) can be written as a combination of a ten and a few ones.

SplashLearn has a good number of math practice problems in decomposing teen numbers.

Once the children are comfortable with teen numbers, they are introduced with bundles of 10, such as 20, 30 etc.

Count groups of 10 is a topic that discusses counting by 10. This not only gives a better idea of the concept of place value system but also prepares children for the multiplication table of 10.

The students are familiar with counting up to 100. So, the comparison can be done using the logic that the number that comes later in counting is of greater size. Probably this would be the logic used by kids of grade 1.

But let us look at the technical side of it too.

When there are more tens in a number definitely that number will be greater than the ones with a lesser number of tens. So, for comparing two-digit numbers, first, you need to compare the digit at ten’s place.

Now when there are two numbers with the same number of tens, you need to consider the number at one’s place. Whichever number has the greater value at one’s place, is a greater number in this case.

Children need a numerous number of experiences verbally comparing two sets of objects using comparison vocabulary of less than (<), greater than (>) and equal to (=). This will help them connect the vocabulary to math symbols. SplashLearn has a good number of math worksheets for comparing the visual models and numbers.

Comparing 14 and 41: As the kids have just got introduced to the place value system, they might be confused with the number value placed at the two positions. The number 14 has 1 ten and 4 ones whereas the number 41 has 4 tens and 1 one. A place value chart below can explain it better. 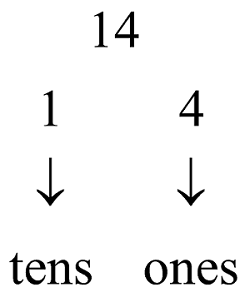 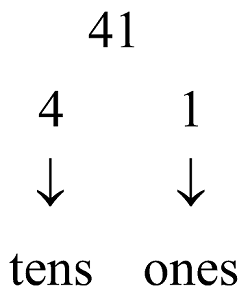 So, only a thorough understanding about what is place value can help solve the issue.

Children are already familiar with adding one digit numbers for solving word problems. For example, Simon has 4 marbles in his right hand and 3 in his left. How many marbles does he have altogether? By counting the marbles one by one, the child can find the sum 4 + 3 = 7.

In grade 1, children are introduced to the addition of a two digit number and a one-digit number.

Grade 1 in St. Peter’s Public School has 13 members in their Drama Club. If 5 new kids join the club, what would be the total number of members?

This can be done using counters or checkers as shown below: 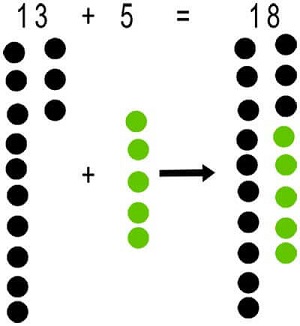 Thus, when there are as many ones as ten, the child needs to compose a ten in the resultant sum.

Children need a lot of practice for splitting and adding the tens and ones this way.

Rhea has 44 candies in a pouch. If she adds 30 more to the pouch, how many candies does she have in her pouch?

Using counters, it is easier as there is an addition of 3 tens to 44.

Another way of looking at it is using a number line.

A hundred chart or a numbered ten by ten grid also can be used for the same.

In a hundred chart the consecutive numbers in each column are a difference of 10. 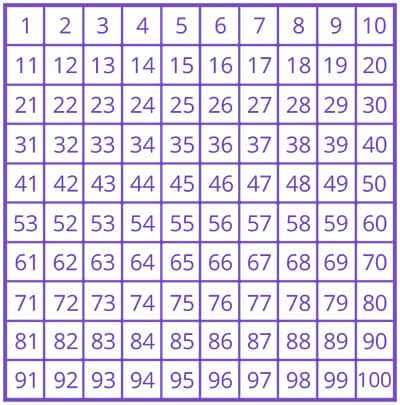 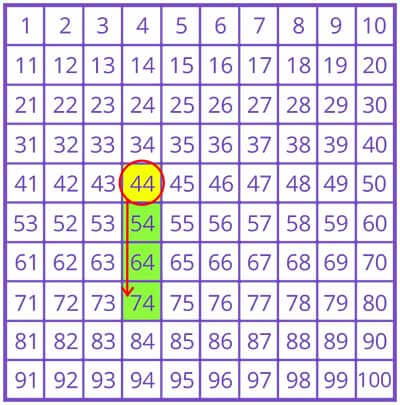 Using counters it is very easy to imagine the subtraction by cutting off one set of tens. 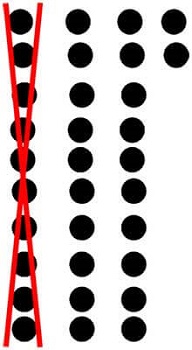 Just like addition, subtraction can also be shown using a number line with a backward leap of 10.

Once the concept is clear to the kids and with repeated practice, they can do it as a mental math.

In a similar way, when there is more number of tens to subtract, repeat the same process.