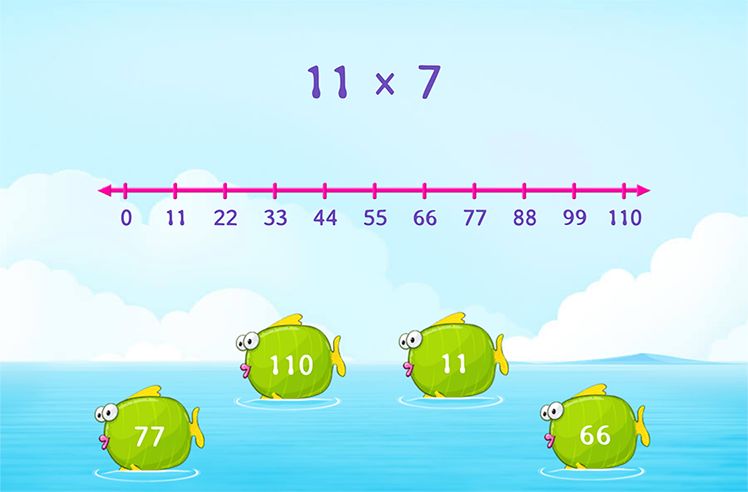 Multiply by 11 With the Help of a Number Line

Building a strong foundation in multiplication is an important step in helping your child become proficient and confident. Here your young mathematician will use the number line as a tool to practice more on the multiplication facts of 11. Your fourth grader will have an exciting time playing this g... 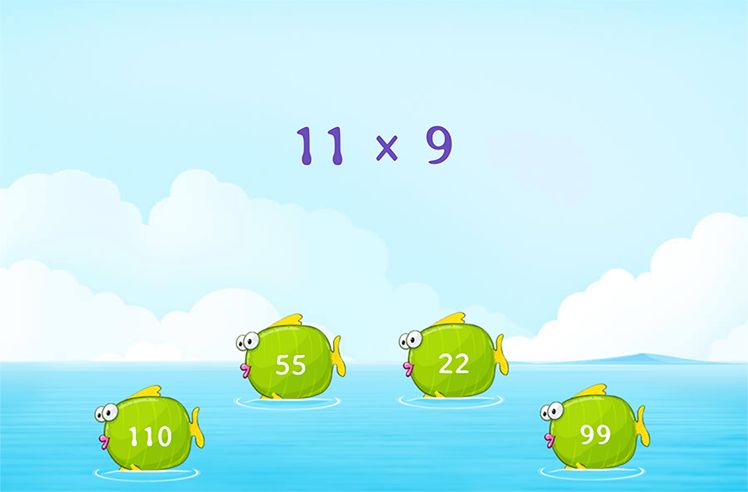 Multiply and Choose the Correct Multiple of 11

The game challenges students to solve a set of problems on multiplication. These engaging problems encourage them to apply their prior knowledge of the topic and find the answer. Students will tap on the interactive elements to mark their responses. Your fourth grader will develop the required confi... 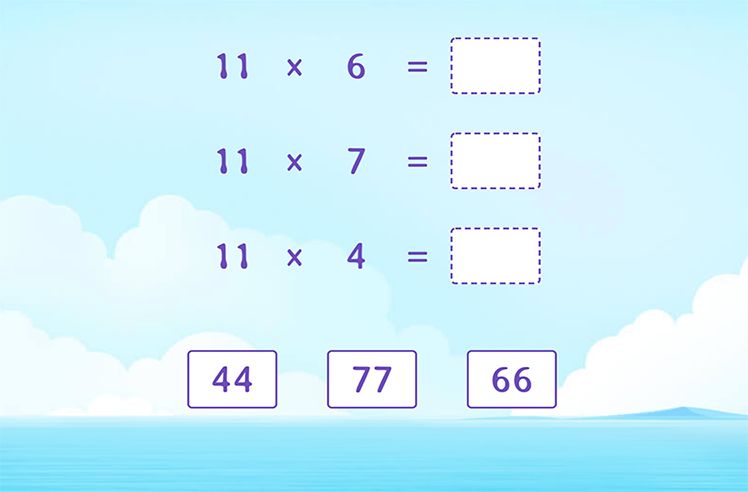 Select the Correct Multiplication Fact of 11

Give your child food for the mind with this game on multiplication. Concepts like multiplication can be confusing for kids, but with practice they can gradually get more comfortable. The game encourages learners to practice multiplication facts of 11 to find the product. Students will match a set of... 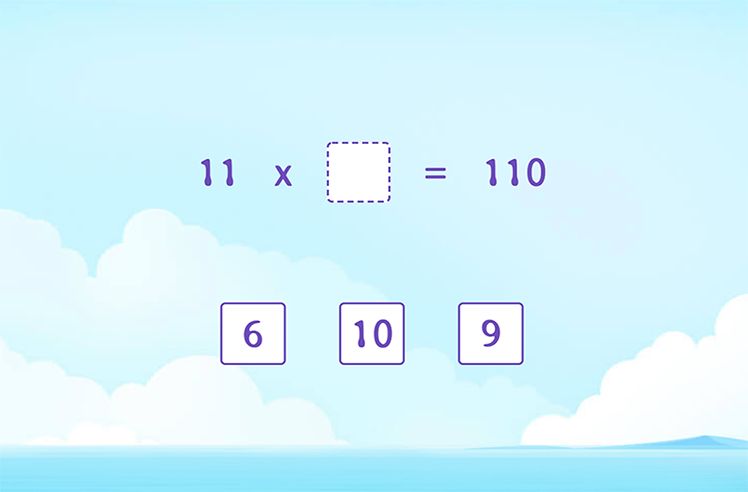 Complete the Multiplication Fact of 11

Kids often develop misconceptions about concepts in mathematics, including multiplication. It is important to help them get over those misconceptions. The game encourages your young mathematician to use their understanding of multiplication to find the answer. This game will nudge your fourth grader... 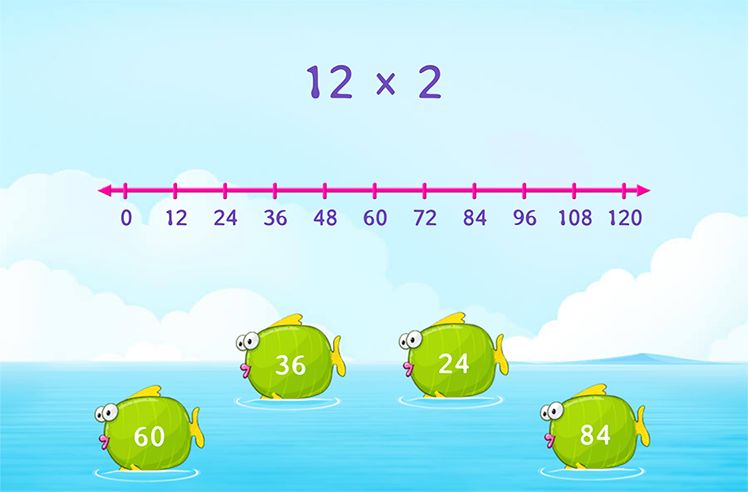 Use a Number Line to Multiply by 12

The game encourages students to use the number line to perform a math operation and develop a solid understanding of multiplication. Students will need to analyze and select the correct answer from a set of given options. Regular practice will help your fourth grader remember the multiplication fact... 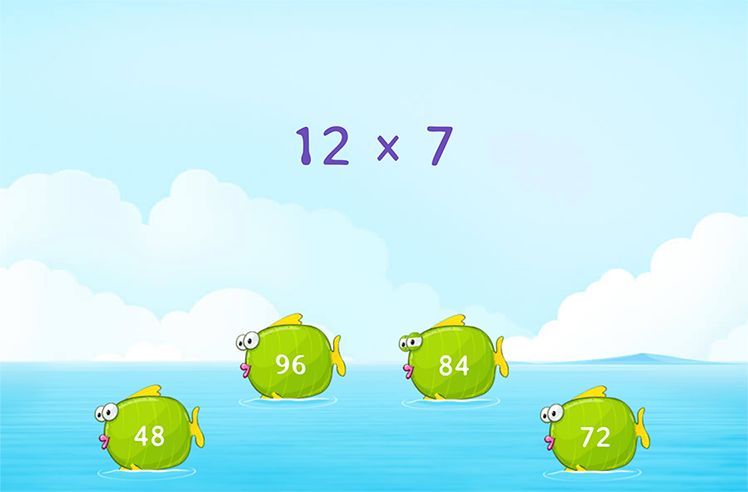 Choose the Correct Multiple of 12

Improve your child's proficiency in time with this game. Students' struggle with multiplication is often attributed to a lack of adequate practice. Timely and effective practice with a focus on fundamentals will help your child become more proficient in multiplication. The game gives students an opp... 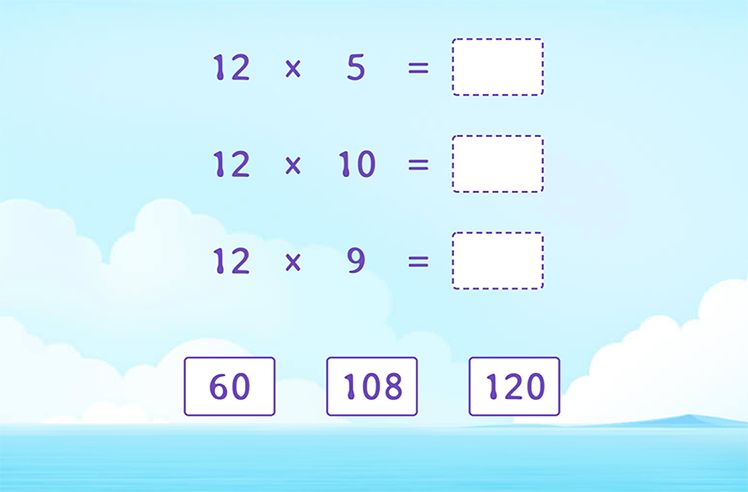 Match the Multiple With the Correct Expression

Students can easily overcome the struggles with multiplication by practicing the concept in a fun and engaging way! The game requires students to complete a set of multiplication problems and in the process, they learn and practice multiplication facts of 12. What better way is there for your fourth... 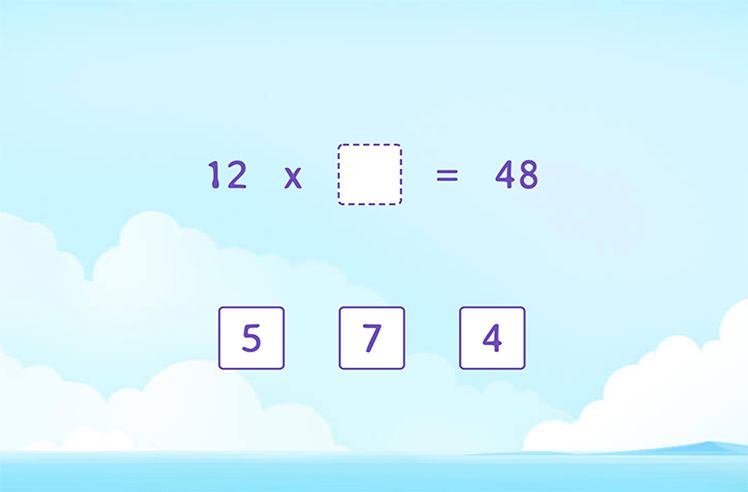 The game involves working with a set of problems on multiplication to find the answer, which helps young learners solidify their understanding of the concept. Students will need to fill in the given blanks to complete the multiplication equations. Help your fourth grader become proficient in multipl... 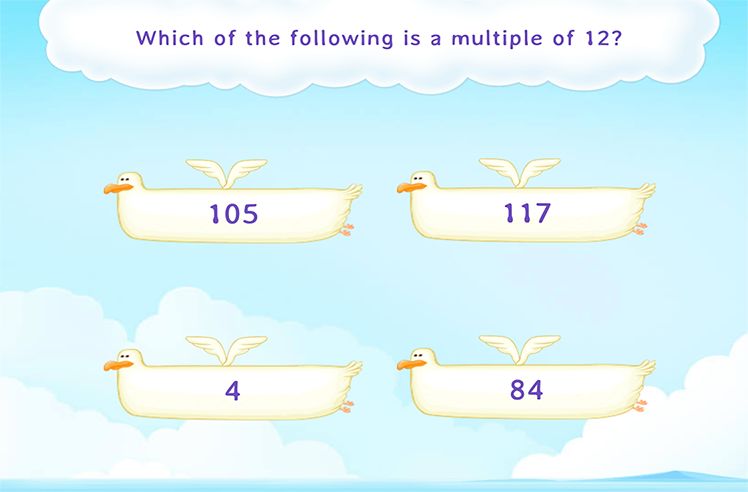 Identify the Multiples of 12

Nudge your child towards mastery in time with this super fun game. There are misconceptions that are often associated with concepts like multiples, but those can easily be put on the back burner with regular and targeted practice. This game consists of smartly designed tasks to help your young mathe...

Tape Diagrams or Bar Models/ Checkers, Coins: These can be used to show the grouping strategy for relatively smaller numbers.

Blocks: Buiding blocks can be used to show the factor pairs as shown: 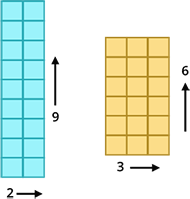 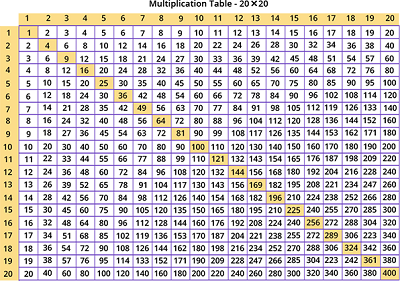 Area Models: Area models can be used to explain the factor pairs which would be discussed in detail, later in the lesson. 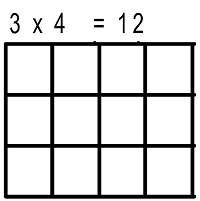 Activity using times table charts: Kids can be grouped into 7 groups and printable multiplication charts up to 20 can be distributed among the kids.

Each group can be allotted a times table and a product from the table.

The group can use the multiplication chart to find one of the factor pairs of the product given.

Board Game with Primes and Composites: The game requires a 10 by 10 in which the numbers from 1 to 100 are written in order and a six-sided die. When the die is rolled, the players start moving on the condition that a player has to find a factor other than 1 and the number itself while standing on a number. If the player lands on a prime number, he/she has to go back to 1 and start fresh.

Apart from these, there are many online multiplication apps and learning games for kids that can be used for practice the concept learned.

In grade 3, kids learned about the definition of multiplication as a repeated addition as well as using grouping strategy. Rectangular arrays were used to denote multiplication.

For example, the array below shows 20 dots arranged in 4 rows with 5 dots in each row.

In grade 3, they get familiar with the basic concept as well as they learn multiplication tables of one-digit numbers. In grade 4, kids learn to formulate verbal comparison statements from multiplication equations and vice versa. That is, consider the equation 3 × 4 = 12 .

This can be represented using a tape diagram or bar model as shown:

Now, consider the related multiplication equation 4 ×v3 = 12 . Here, a similar bar model would of 4 groups of 3s topped on one another to form 12.

This can also be represented using dots.

Chang has 7 times as many as marbles as Sher in their marble collection. If Sher has 8 marbles, how many marbles does Change have?

In such real-world word, problems kid learn to formulate the equation by assigning a variable to the unknown factor. Since the number of marble that Chang has is unknown, we can give an arbitrary symbol, say x, to represent the same. Then, this can be written as an equation as:

Knowing the multiplication tables, children can easily compute that 7 × 8 = 56 .

Thus, Chang has 56 marbles in his collection.

Sasha is looking for interior decorations for the annual day celebrations of her health club. A company called “All about Celebrations” rents chairs at the rate $7 for 10 chairs. Another company, “Posh Decors” gives them for $20 for 25 chairs. If Sasha is hiring 100 chairs, which one is more cost-effective? Justify the choice by the quoting the difference in money.

Comparing x and y, it is more cost effective to hire the chairs from All about Celebrations. The difference in cost is $10.

Children also acquire a knowledge about estimation, where and how to estimate real-world problem-solving.

In grade 3, kids learn about one-digit factors and their products. To revise it, if you have a multiplication equation 6 × 5 = 30 , the numbers 6 and 5 are called factors and 30 is called the product. 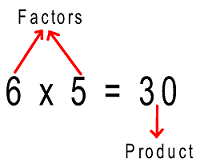 Here, 6 and 5 are called a factor pair of 30. A factor pair refers to a set of two numbers, which when multiplied result in a definite number, the product.

This can be represented using area model as:

Now, using these squares, the other factor pairs can be identified. There are 12 squares altogether that need to be re-arranged to form another rectangle.

Consider arranging them in two rows.

Now, it is not possible to arrange these 12 squares in 5 rows and maintain the rectangular array. So, 5 is not a factor of 12.

We have already listed 6 as a factor, thus completing the list of factor pairs. 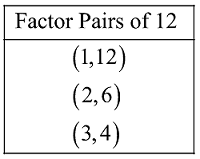 Another method of finding the factor pairs is by listing them down.

Find the factor pairs of 30.

In a similar way, 30 can be written as the product of the factor pairs in multiple ways.

Another manipulative that can be used to identify the factor pairs of a number is a multiplication chart. 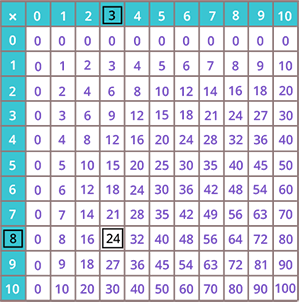 Here, to find the factor pair for the number 24, look at the vertical and horizontal aligned numbers.

The practice multiplication sheets for factors in SplashLearn discusses identifying the factors of a given number as well as finding the number given the factors of the same.

The number 1 is considered to be neither prime nor composite. The smallest prime number is 2 and it is the only even prime number.

Prime numbers have only two area models that represent the product of the number itself with 1. This is because a prime number of squares cannot be re-arranged maintaining the rectangular array alignment.

Multiples can be thought of as a result of skip counting by each of the factors.

Now, the skip counting by each factor will show that 36 is a multiple of the factor. 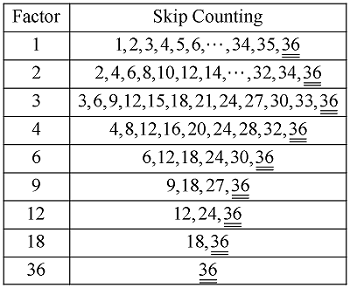 By the end of grade 4, children would be able to find the factors of any two-digit numbers. Certain multiplication facts that would be helpful for the process are listed below.

A pattern is a sequence that repeats following a particular rule. For example, the sequence 1, 3, 5, 7, 9, …. Starts with 1 and adds 2 to get the next term. This is an additive pattern.

Another pattern, 2, 4, 8, 16, 32,….. multiplies the previous term by two to get the next term. This is a multiplicative pattern. There are combined ones too.

St. Peters’s Public School has recurring and savings schemes for kids. The initial deposit for Kathy’s recurring account was $20 and she deposits $5 every week. What would be the account balance after 8 weeks?

Let x be the number of weeks that Kathy deposits the money for. She deposits $5 every week. So, in x weeks she deposits $5x. The initial deposit of the account is $20. Thus, at the end of x weeks, Kathy has $(5x + 20) in her account.

Once the child formulates the pattern in such a manner, it is easy to find the value in a particular week. To find the amount at the end of 8th week, substitute 8 for x.

Thus, at the end of the 8th week, the account balance would be $60.

Kids can get comfortable with identifying and forming patterns using the worksheets provided by SplashLearn. Further, the practice problems for analyzing the patterns encourages kids to identify the rules behind the patterns.