Add to Find the Sum

Nudge your child towards mastery in addition with this super fun game. Students' struggle with addition is often attributed to a lack of adequate practice. Timely and effective pra...

Struggles with addition can be easily overcome if students practice the concept in a fun and engaging way! The game gives students plenty of opportunities to work with problems bas...

Identify the Addition Pattern and Fill the Correct Answers

The game challenges young mathematicians to hone their math skills by solving a set of problems on addition to find the answer. Students will need to correctly fill in the model to...

FIll the Missing Number in the Addition Solution

Building a strong foundation in addition is an important step in helping your child become proficient and confident. The game invites learners to work with a set of problems on col...

All Addition Games for 4th Graders

Identify the Missing Numbers in the Addition Solution

Boost your child's understanding of addition with regrouping in this game. There are misconceptions that are often associated with concepts like addition regrouping, but those can ...

The game requires students to recall concepts related to addition and find the answer to move towards mastery in the topic. This fun game will help learners practice addition using...

Use Column Addition and FIll in the Correct Sum

Your child will practice addition in this fun game. Concepts like addition can be confusing for kids, but with practice they can gradually get more comfortable. The game has a set ...

Recognize the Addition Pattern and Fill the Sum

Kids often develop misconceptions about concepts in mathematics, including addition. It is important to help them get over those misconceptions. The game challenges students to sol...

Identify and FIll the Missing Number in the Addition Solution

The game encourages your young mathematician to use their understanding of addition to find the answer. Students will fill in the missing numbers to correctly complete the column a...

Fill the Missing Number and Complete the Addition Solution

Help your child become an expert in addition with this game. Students' struggle with regrouping in addition which is often attributed to a lack of adequate practice. Timely and eff...

In the formative years, a child develops effective skills through play and games. We live in an age where a child spends a major chunk of their time online and on the computer. Online math games and math puzzles are a great way to develop a foundation for math skills in a playful manner and are in alignment with the core curriculum.

As the fourth grader develops their mathematical skills, try to use clear and precise language in discussions and establish proper reasoning.

An abacus is one of the oldest and most useful math aid for representing numbers and doing various mathematical operations.  It can be used for teaching math based on core curriculum as a manipulative.

In grade 4, the abacus is handy in representing 4-digit to 7-digit numbers. It makes use of the place values. According to the US place value system, the place value chart is divided into periods and places as follows: 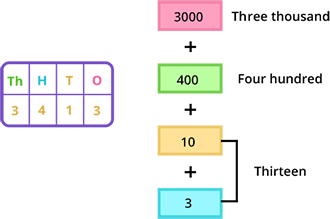 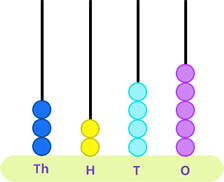 The above number pictures represent 4 -digit number place values and representation using the abacus. Each stem of the abacus can take 9 unit balls. So, the largest 4 digit number will be formed by placing 9 unit balls in each stem, i.e. 9999. 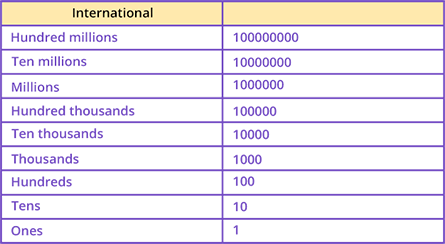 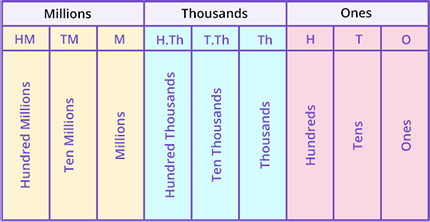 Each period has three place values

Ones period: ones, tens, hundreds

Grade 4 math study will not go beyond 1 million.

We can add any two number with the help of the abacus which involved regrouping also.

Addend 1 has a digit at the ten thousand place whereas addend 2 is a 4 digit number, so taking it as 0 = 4

Any number whether 4-digit or 7 digits can be split into parts according to its place value. For example; 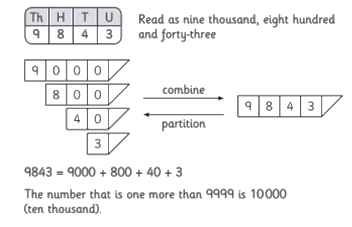 Place value cubes and unit cubes as a helpful math aid and teaching manipulative for solving an addition problem stated as per the core curriculum.

Look at the example given below, where it is required to find the sum of two numbers 4655 and 2769. These numbers are first represented using place value cubes and then put together to form a sum. 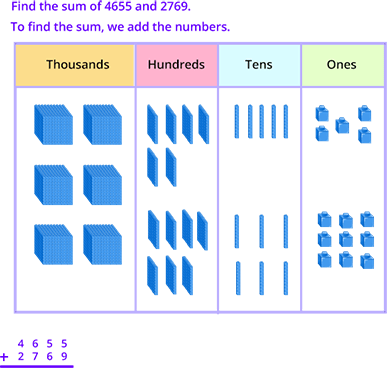 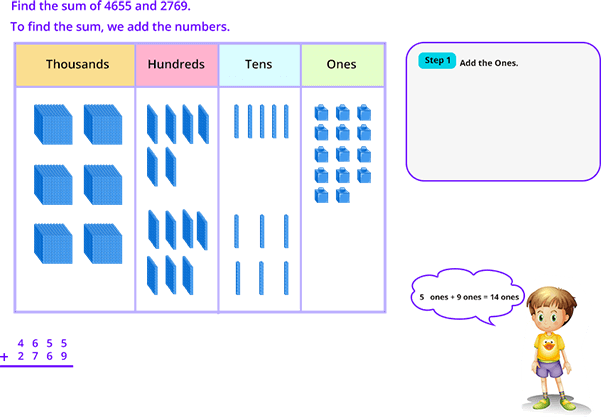 Suppose there is a math addition problem involving any two 3 digit numbers.

Say, for example, take a simple case of 3 digit addition with regrouping,

Well in case of such a first trial would be to note down these two numbers on a piece of paper and start and start solving by adding one by one from the least place value digit.

Another way can be doing the math sum mentally by applying simple mental math strategies without the help of any pen or paper.

What are the two numbers?

This utilizes the associative property of addition.

Now the addition of two numbers becomes simpler than before. Looking at different place values, in the addend, the tens and one’s place value is zero.

Is the final answer to the addition of 3 digit number problem?

Let’s try for a 4 digit number addition with regrouping.

In this math problem, the child learns to identify and generate a given number sequence or pattern.

For example, given the rule “Add 3” and the starting number 1, generate terms in the resulting sequence and observe that the terms appear to alternate between odd and even numbers. Explain informally why the numbers will continue to alternate in this way.

Kids investigate different patterns to find rules, identify features in the mathematical patterns, and justify the reason for those features.

Rule: Starting at 1, create a pattern that starts at 5 and adds each number by 5. Stop when you have 6 numbers

In this math problem, the children use addition with the previous number to generate the next number and the

Fraction addition with the same denominator

Step 1: Make sure the bottom numbers (the denominators) are the same.

Step 2: Add the top numbers (the numerators), put the answer over the denominator.

Step 3: Simplify the fraction (if needed)

It’s a very simple math game as well as math educational activity for a 4th grader. Divide the class into 4 teams. Lay down 8 cards in pair of 4 in front of each team. Create an addition problem with two 4-digit numbers. 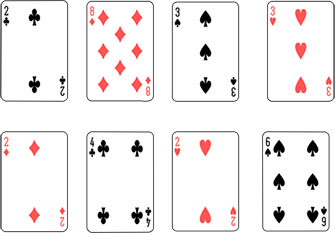 The team is given time to add the two numbers. The one which gets nearest to or sum as 5000 wins.

Play more rounds, the team that wins the most will win this math game.


This is an interesting math learning game for kids. Add 3 digit numbers to two spinning wheels. Drill a hole in the middle of each spin wheel and attach it to a sheet or a white paper board using paper clips.

Paste a pointer with each spinning wheel. Spin the wheels and add the three digit numbers on each of the wheels. 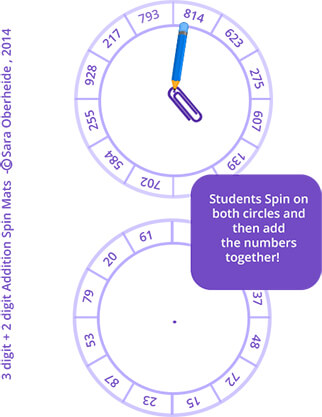 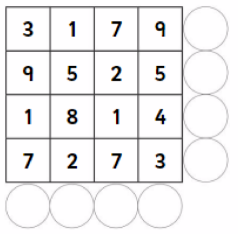 This 4 digit number addition with carrying math activity that involves multiple addends is a great way to teach simple math additions to kids.

Add numbers in each row and write the final in the circle.


Mr. Math Magician is upset and going crazy as some of his numbers have gone missing. Help him find his numbers by solving simple math problem dealing with the 4-digit partition of numbers.

The position of the digit in a number gives its value.

The same math puzzle can be created for 5 digits, 6 digit or 7-digit addition as well. 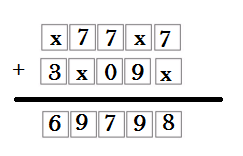 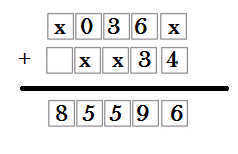 
In this math activity for the fourth grader, the children will pair up two addends to form a sum. This math game for kids can be designed for addition with carrying or without carrying.

Drag the addends in the empty boxes provided below.

Given below is a sequence of numbers, identify the pattern and predict the next number or find the missing numbers in each.


In this math game, color the cube and then add up the fractions to get to the solution of the math activity.


Teaching through simple math puzzles is a great way to learn Math facts and develop mental calculation and thinking skills in a fun and easy way.

Most children are much more engaged and motivated solving math puzzles than working out pages of traditional math facts. This also helps your child to develop their Math fact skills as well as their strategic thinking and reasoning.

Help Itsy the ant to climb up the sugar mountain by placing the missing numbers in this educational math puzzle. Each sugar cube in a next level is made up by adding the two numbers given in the two sugar cubes below. 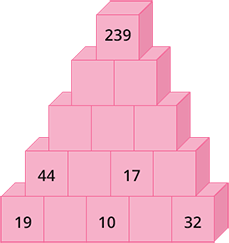 The simple math blasters and math riddles are designed by people having expertise in early childhood education programs and home schooling curriculum.

The SplashLearn lab activities and adding games help the child to explore mathematical ideas by doing. It emphasis on the heuristic approach of learning.