Subtract and FInd the DIfference

Struggles with subtraction can be easily overcome if students practice the concept in a fun and engaging way! The game gives students an opportunity to apply the concepts of place ...

Use Column Method to Subtract and Find the Difference

The game involves working with a set of problems on the column method of subtraction, which helps young learners solidify their understanding of the concept. Students will use thei...

Fill the Missing Number and Complete the Subtraction Solution

Your child will practice subtraction with this colorful game. There are misconceptions that are often associated with concepts like subtraction, but those can easily be put on the ...

Identify and FIll the Missing Number in the Subtraction Solution

Building a strong foundation in subtraction is an important step in helping your child become proficient and confident. The game encourages students to apply their understanding of...

All Subtraction Games for 4th Graders

Fill in the Correct DIfference

The game requires students to work with a set of problems on subtraction and use their conceptual understanding of place value to find the answer. Students will need to fill in the...

Solve and Fill in the Correct DIfference

Build your child's subtraction skills with this game. Concepts like subtraction can be confusing for kids, but with practice they can gradually get more comfortable. The game ensur...

Recognize the Missing Numbers in the Subtraction Solution

Kids often develop misconceptions about concepts in mathematics, including subtraction. It is important to help them get over those misconceptions. The game gives students plenty o...

Identify the Missing Numbers in the Subtractions Solution

The game challenges young mathematicians to hone their math skills by solving a set of problems on column subtraction to find the missing numbers. Students will work column by colu...

Games play an important role in teaching mathematics irrespective of who you teach, be it preschool kids, school children, adults, teachers or parents. Incorporating games for teaching math and solving math problems is beneficial for:

Subtraction Games and Activities for Kids

Following is a list of the most effective adding and subtracting integers games and fun math activities. Most of the math activities and learning games can be adapted for use with both addition and subtraction (inverse form of addition). Also, the games can be adapted for use with two-digit numbers or larger numbers by changing the size of quantities involved. These games can be used for integers, decimals and mixed numbers too by changing the type of quantities involved

No. of players: 2 players/teams

There are many games for kids but this one combines fun and education. Use Clixi to build a long row of linked squares. You need an odd number of squares. Place one counter (to be shared by both players) on the middle square to begin. Each player, in turn, throws two dice and finds the difference between the two numbers obtained. This player can then move the counter that number of squares towards his/her end of the row of squares. Play then passes to the next player. The winner is the player who manages to reach his/her end of the row of squares first. 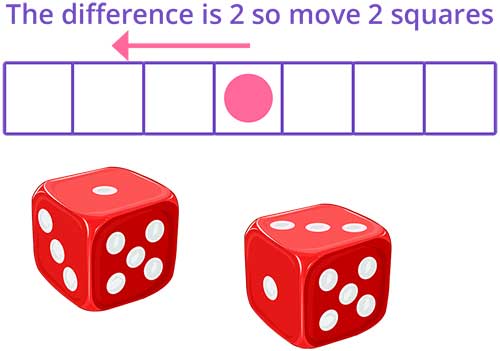 Each player starts with a 10x10 grid of squares e.g. squared paper. Take it in turns to throw 2 dice and find the difference between the numbers. On finding the difference that player is allowed to color in the corresponding number of squares on their grid. Any disputes can be settled using a subtraction calculator to check and solve math problems. The winner is the player who completes their grid first.

Make a pack of number cards containing 2 of every number between 0 and 20. Spread the cards out face down on the table. Players take it, in turn, to turn over two cards.

Version 1: If the player can calculate the difference he/she can keep the pair of cards. The winner is the player with the most pairs when all the cards have been claimed. This version helps kids practice math questions, particularly of subtraction.

Version 2: If the difference is the same as a previously agreed target number (between 0 and 19) then the player can keep the pair of cards. If the difference does not match the target number then they must be replaced face down. The winner is the player with the most pairs at the end. This version is useful for looking at the pairs of numbers which produce a particular difference in a structured way. Simply order the pairs of numbers at the end of the game to emphasize that (20 – 8) = (19 – 7) = (18 – 6) = (17 – 5) = 12

Following are more pairs for the target number 12

No. of Players: 2 Players

Each player has a board (or a strip of 2cm squared paper) like this:

Each player throws a dice and places that number of multilink cubes on his/her board. They look at the difference between the amounts. The player with the largest number takes the difference and ‘keeps it’. This process continues until one player has 10 multilink cubes which he/she has ‘kept’. That player is the winner.

Build a straight line of dominoes (a domino ‘train’) such that the difference between the adjacent halves of each pair of dominoes has a given difference of 0.

Try this activity with a different difference between adjacent dominoes e.g. a difference of 1, 2 or 3. Which is easiest/hardest and why?

To make this slightly harder, build a domino loop (using a complete set of dominoes) so that the last domino to be placed has the correct difference between it and the first half of the initial domino. Both domino trains and domino loops can be made collaboratively (pool a complete set of dominoes and help each other complete the task) or competitively by sharing out the dominoes before starting and taking turns to place a domino at either end of the chain of dominoes. If playing the competitive version, a player misses his/her turn if he/she cannot put down a domino which gives the required difference between it and the previous domino.

Each player needs a strip of 6 squares (e.g. drawn on squared paper) numbered from 0 to 5. Players take it in turns to roll two dice marked 1 to 6 and find the difference between the two numbers rolled. This difference number is located on the player’s strip of squares and is then covered with a counter. The first player to cover all the numbers on their strip of squares wins.

A blank 5 × 5 grid of squares is drawn on squared paper and shared between 2 players. Each player, in turn, throws the two dice and calculates either the sum or the difference of the two numbers thrown. This sum or difference is entered anywhere on the grid of squares. A point is scored each time a line (horizontal, vertical or diagonal) totals 15. The game can be played co-operatively or competitively. 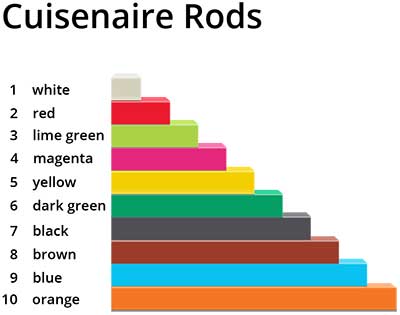 Cuisenaire rods is one of the best math aids for learning. Build a staircase from Cuisenaire rods so that the difference between adjacent steps is 1. then try with differences of 2 or 3 or 4 ... and so on. Find a way of recording which rods you used in each staircase.

Progression from Counting to Subtraction

The process of subtraction begins by refining counting techniques but then progresses to learning of key facts and making use of these for harder calculations:

The child calculating 6 − 4 holds up six fingers, folds down four and counts the remaining upright fingers.

The child working out 6 − 4 counts back from six to four, keeping a tally using the fingers of the numbers that are uttered: ‘five, four’ (holding up 2 fingers).

To work out 6 -4 the child counts up from 4 to 6 (‘five, six’), keeping count of the spoken numbers using fingers. Children often find this confusing because of their mistaken perception that subtraction is solely about ‘taking away’.

As in addition, using place value knowledge previously acquired (especially the idea of partitioning), it is then possible to begin the process of developing written algorithms (i.e. methods/routines) for tackling harder subtraction calculations involving binary subtraction and long subtraction

Using informal ways like paper jottings, such as an ‘empty number line’, as an aid to the mental calculation of two-digit subtractions (using complementary addition or compensation methods).

Using an expanded form of the standard decomposition algorithm to solve two digit subtraction with regrouping. The same can be extended for subtraction of numbers involving three digits or more.