What is a Pentagon?

A 2D polygon with five sides and five angles is called a pentagon.

“Penta” means “five”, and “gon” translates to “angles” in Greek, and hence when we combine both words “penta + gon”, we get the word “pentagon”.

This is how the five sided shape looks like:

Parts of a Pentagon Shape

Pentagons can be classified into four types depending on their sides, angles, and vertices.

If all five sides are equal in length and all five angles have an equal measure, then the shape is called regular. When the side and angles are not equal, it is called irregular. To understand it better, if you look at a regular pentagon from any side, it will always look the same since it is symmetric. But, an irregular one might look different from all sides or angles since it has different side lengths and angles.

A convex pentagon is one in which all its vertices point outwards. A concave shape refers to the one with at least one vertex pointing inward.

In other words, a concave pentagon will have a bowl-like shape between some sides, while a convex will not have such a shape, as all of its vertices point outwards.

Properties of a Pentagon

Area of a Pentagon

The area of this shape is the total space within its five sides. To find the area, we must first determine its type and the information we have about it.

Area of regular pentagon = 5 × Area of the triangle or

Apothem is a perpendicular line from the center of a polygon to one of its sides. It is also known as the radius of the shape.

The Perimeter of a Pentagon

The total length of the five sides of a regular or irregular polygon is called its perimeter.

The perimeter of a regular five sided shape equals (5 x side) units if all the sides have the same measurement.

Did you know you can create a simple paper strip pentagon?

Step 01: Get a long paper strip. You can choose your favorite color.

Step 02: Now, make a pretzel-like knot with the paper. Look at the image and follow the instructions.

Step 03: While keeping the paper flat, tighten the knot with soft hands. Be careful not to tear it.

Step 04: Now, if there is excess paper, fold it back or trim it off.

Pentagons are extensively used by architects and are found throughout the natural world. They are also very commonly used in fundamental geometry. To learn geometry principles in a fun and engaging way, check out SplashLearn‘s educational games, courses, and worksheets for kids.

What is a Pentagon? - Definition, Types, Properties &  Examples

How many parallel sides can there be in a regular pentagon?

1
0
5
3
CorrectIncorrect
Correct answer is: 0
A regular pentagon has zero parallel sides. An irregular one can have two (one pair) or four (two pairs) parallel sides.
2

The side length of a perimeter is 6 cm. What is the perimeter of the pentagon?

If the perimeter of a regular pentagon measures 250 cm, what would be the measure of each side?

How many triangles can a pentagon be divided into?

5
3
4
6
CorrectIncorrect
Correct answer is: 3
A pentagon can be divided into 3 triangles. 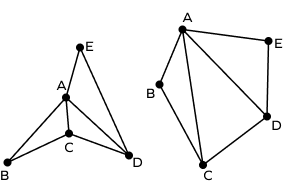 What is the area of the pentagon whose side measures 9 cm and apothem measures 10 cm?

Is a pentagon also a parallelogram?

No, a pentagon is a five-sided polygon, while there are only four sides in a parallelogram.

How are a quadrilateral and a pentagon similar?

A. A quadrilateral and a pentagon are closed polygons with the sum of their exterior angles as 360°.

What are the three attributes of a regular pentagon?

How many right angles can a pentagon have?

A pentagon can have a maximum of three right angles. If the number of right angles is four, the last angle will have to measure 180° for the sum of all interior angles to be 540°, which is not possible.

How many acute and obtuse angles does a regular pentagon have?

A pentagon has zero acute angles and five obtuse angles, each measuring 108°.

Can a pentagon have five unequal sides?

Yes, all sides and angles of an unequal pentagon can be different from each other.