Skip to content
Home » Mass in Math – Definition with Examples

Now Kids Can Learn All About Mass in an Innovative Way

Kids are inquisitive, and it is in their best interest to fuel their thirst for knowledge as a parent or teacher. They are surrounded by objects all around and brimming with excitement. If your child is in kindergarten, it might be the right time to introduce them to the concept of mass. Teaching them young will help them to effortlessly grasp the more complicated concepts in subjects like mathematics and physics later on.

Mass is a parameter of measurement that calculates how much matter is contained in a body. Children learn faster in a relaxed atmosphere, so try to teach them about mass outside the classroom. Start by talking about how huge or small objects are.

For example, you could ask them to hold a pen in one hand and a bottle of water in the other. Let them compare which object feels more challenging to hold (heavier). In this case, the bottle of water will be heavier than the pen. And thus, broach the topic on mass. A heavy object has more mass than a lighter object. Subsequently, the mass of an object is related to its weight.

What Units Are Used to Measure Mass?

Mass is a physical quantity. Mass is measured in terms of the weight of a body. Gram, kilogram, and pounds are some standard mass units to measure it. The SI unit of mass is the kilogram; however, smaller objects are measured in grams.

To give your child the idea of what a mass of 1 gram looks like, you can offer them a paper clip. Similarly, you can provide them with a pen that would probably have a mass ten times more than a paper clip. Acquainting kids with mass through these daily objects and mass examples would help young minds retain the concept better. However, simply teaching them about the different units may not be enough to help them remember how they are related.

It is clear from the picture that the paper clip weighs only 0.07 grams.

It is known that 1 kilogram = 1000 grams indicates that a gram is a smaller quantity than a kilogram. But how do you help children retain this information? You could use the same object of different sizes to elaborate. Take a small rock and a giant boulder perhaps. Stick a paper with a gram written on it on the rock and a paper with a kilogram written on it on the boulder. This

visual representation will help children remember the units and their relations more effectively.

This pumpkin, on the other hand, weighs 4 kg. Therefore, it is apparent that the weight of a pumpkin (kg) > the weight of paper clips (g).

Table of Conversion of Units of Mass

Two objects with the same mass will weigh the same on Earth. An object that has more mass will be heavier and vice versa. An object will weigh differently on different planets as weight is not a concept exactly interchangeable with mass, but it depends on the force of the gravitational pull.

An object weighs less on the Moon than it does on Earth.

How to Calculate Mass?

Some fun and exciting games for kindergarteners to teach them to understand the concept of mass and its applications are as follows:

What better way to teach your kids the concept of mass and weight than using real-life objects through games? This keeps them entertained and motivated while learning something new. Your child will tap on this game’s lighter or heavier object as instructed. This aims to make your child proficient in weight measurements and helps them gain confidence along the way.

This game shows two objects on a balancing scale, where one object being heavier tips down the scale. Your child must tap on the heavier objects to win the game. This game is designed to make them learn measurements efficiently.

Your child must identify the lighter object between two given objects in this game. Mass and its relevant weight might seem a complicated and confusing idea to children initially. But through practice, solving challenges, and these fun games, children will ace the concept.

1. Which of the following objects is heavier?

2. Which of the following has less mass?

Solution: The carrot on the left has less mass as it is smaller.

Mass in Math - Definition with Examples

Compare the mass of both the apples. 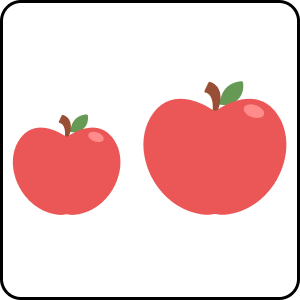 Compare the weight of the following objects. 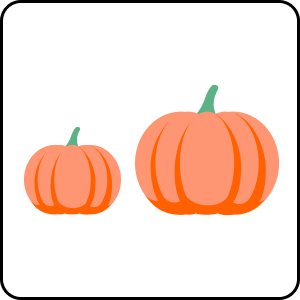 What is the difference between mass and weight?

Although mass and weight are related to an object in terms of massiveness, these concepts are not interchangeable. Mass refers to the quantity of matter in an object, while weight is the force with which an object is pulled by gravity.

Will the mass of a body change if I go to another planet?

The mass of an object never changes. However, the weight of the same body will vary from place to place depending on the force of gravity.

What will be my weight on the Moon?

The weight of an object on the Moon is only 16.5% of its weight on Earth.