In mathematics, We have whole numbers representing whole quantities,
For example, 1 pizza or 2 pizzas.

But what if we have some leftovers from a pizza that is not a whole, how do we write this mathematically?

Suppose we break a whole into 10 equal parts; each part then represents $\frac{1}{10}$ of the whole or one-tenth of the whole, which is mathematically written as 0.1

Further, if we break each of these tenths into 10 equal parts, each part will represent $\frac{1}{100}$ of the whole or one-hundredth of the whole.

Note that each one-tenth is made up of 10 one-hundredths, and it is mathematically written as 0.01.

Note that as we go from left to right in the decimal place value system, each value is$\frac{1}{10}$times smaller than the value to its left.

The place value chart for decimal numbers till the hundredth place looks like this:

Now, let’s see how we can write one-hundredth as a decimal number.

Our decimal number for one-hundredth would be “0.01”.

This shows that we have divided a whole into 100 equal parts, out of which we are considering only 35 parts.

so how do we write this as a decimal number?

We know that 10 hundredths make one-tenth,

So, in a way, we can say that
35 hundredths = 3 tenths and 5 hundredths.
So we will use the decimal place value chart and place 3 in the tenths column and 5 in the hundredths column.

Since we don’t have any wholes here, we will write 0 in the ones place.

In the same way, if we had 40 hundredths, we would write it in decimal form as “0.40” we can also call this 4 tenths since 10 hundredths make 1 tenth.

Let’s consider one last example where we have two wholes and 15 hundredths, which would look like this:

And the decimal number for this would have 2 wholes, 1 tenth, and 5 hundredths.

Difference between Hundred and Hundredth

Answer: Placing this number in the decimal place value chart, we observe that,

Here, the digit at the hundredths place is “5”.

Which of the following figure represents 0.57? 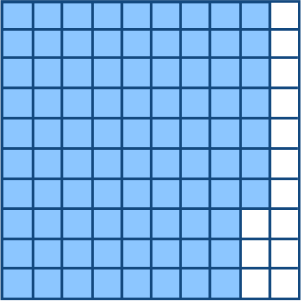 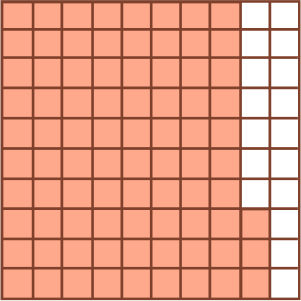 How many hundredths are there in 6 tenths?

What is the decimal form of 83 hundredths?

How many tenths are there in 78 hundredths?

What is the difference between tenths and hundredths?

How many tenths make a hundredth?

What are trailing zeroes?