To help children master the knowledge about directions, we need to start early. Understanding movements is essential for young learners to grasp the workings of a clock and subsequently tell the time. Things like the movement of the clock hands are towards the right.

What is Clockwise and Counter-Clockwise?

Thus, any rightward motion in a circular fashion is known as clockwise, often denoted as CW. But you may be wondering which way is counterclockwise? Subsequently, the circular motion towards the left is counterclockwise or anticlockwise, often denoted as CCW and ACW, respectively. Let us look at the picture below to understand these movements better.

A sound understanding of motions (both CW and CCW) helps express directions clearly and understand instructions. Ensure that kids observe the movement of the clock hands and instruct them about clockwise and counterclockwise motions.

Examples of Clockwise and Counterclockwise Motion

Everyday examples are a great way to teach young children. We perform several activities throughout the day without realizing that they involve CCW motion. Turning off taps, turning a key in a lock to secure it, and unscrewing a screw, are some examples of CCW motion.

The alphabet C is an easy example to demonstrate counterclockwise motion to young learners.

Let us perform a small activity together.

Step 2: Create an imaginary C in the air.

Step 3: Repeat this motion and observe the movement of your finger. It is a counterclockwise motion.

Now that you have learned about CCW motion, note down a list of other daily chores that involve such motions and identify whether they are CW or CCW.

Parents can participate in fun learning activities with their toddlers to help them identify various movements and differentiate CCW from CW. Gradually, you can introduce the concept of half turns and quarter turns by showing them inverted images. The knowledge of half turns and quarter turns will also allow parents and teachers to touch upon the basics of angles. Angles are measured by a CCW rotation. Clockwise rotation will give rise to negative angles. Let’s solve some examples to help you understand the concept better.

Example 1: Identify the motion of the lion if it made a 90° turn only once.

Example 2: Identify the motion of the chicken if it made a 90° turn only once.

Since the chicken turned rightwards and a circular motion to the right is CW, we say the chicken took a quarter-turn CW.

Example 3: Does the arrow below show a clockwise or a counterclockwise motion?

The arrow shows a movement toward the left. Any motion against the movement of the hands of a clock is called a CCW motion. We say that the arrow is showing a CCW motion.

Example 4: Zobo wants to brush his teeth. In which direction will he turn the tap to turn it on?

Solution: Zobo will have to turn the tap CCW to turn it on and brush his teeth.

Taps need to be turned leftward to turn them on. Any circular motion towards the left and against the motion of the hands of the clock is called CCW. Thus, Zobo has to turn the tap CCW or ACW to turn it on.

How many times is image 1 rotated counterclockwise to get image 2?
Each turn is a 90° turn. 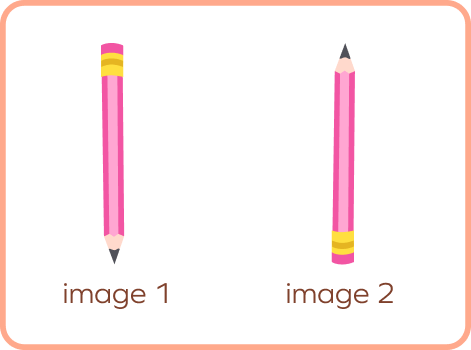 Once
Twice
Four times
Not even once
CorrectIncorrect
Correct answer is: Twice
The image shows a CCW rotation twice. It depicts a half-turn CCW, which equals two 90° CCW turns.
2

Rohan's father was tightening a screw. In which direction was he turning it?

Clockwise
Counterclockwise
Upwards
None of the above
CorrectIncorrect
Correct answer is: Clockwise
A rightward rotation of a screw tightens it by turning it CW. Since any motion in the direction of the movement of the hands of a clock (rightward) is called a clockwise motion, we say that Rohan's father is turning the screw clockwise to tighten it. 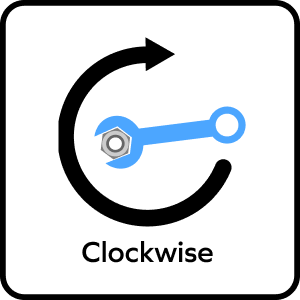 Along which motion do you move your finger to make the alphabet C? 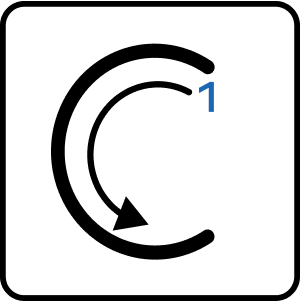 Counterclockwise
Clockwise
Backward
None of the above
CorrectIncorrect
Correct answer is: Counterclockwise
The alphabet C is created with a CCW motion with our finger. Since the motion is against the movement of the hands of a clock (leftwards), we call it a counterclockwise motion.
4

How will you move the bottle's cap to open it? 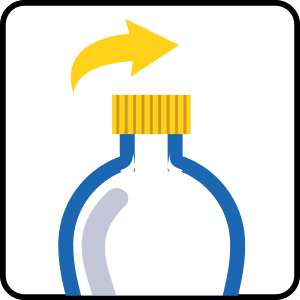 Why is the rightward circular motion called clockwise?

What is the other name for counterclockwise?

Counterclockwise is also known as anticlockwise.

In which direction are angles measured?