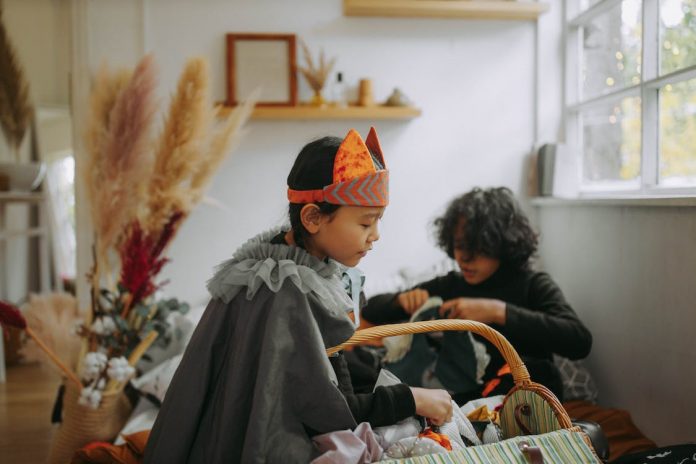 Halloween is around the corner. And the best way to get your children into Halloween spirit is to crack some hilarious Halloween jokes with them.

Halloween jokes for kids are not only great for setting the festive mood around your house or class. But humor can also help to improve your child’s academic growth.

Many studies showed that humor in learning improves children’s performance by capturing their attention, reducing anxiety, and encouraging social interaction.

Also, there is nothing better than cool jokes or puns to create a memory with kids. So, let’s check out the 100+ best Halloween jokes for kids to get into the horr-ious mood.

The kids’ Halloween jokes and puns list is longer than you imagine. This is because so many kids’ jokes are available for the scary and fun Halloween celebration.

But, for our readers, we have shortlisted more than 100 funny kids Halloween jokes they can share with their families. So, roll up your sleeves and get ready to roll on the floor with laughter.

1. How do vampires come to the Halloween party?

2. Why did the headless horseman get a job?

Because he was trying to get ahead in his career.

3. Why are skeletons afraid of the storm?

Because they do not have guts.

4. Why did the skeleton run away?

Because the dog was after his bones.

5. Why did witches take a nap?

Because they need to rest their spell.

6. Where did Dracula keep his money?

At the blood bank.

7. How do you fix a broken lantern?

By using a pumpkin patch.

8. What do you call a roommate of a witch?

9. What happens to vampires when they go to snow?

10. Why don’t vampires have many friends?

Because they are a pain in the neck.

11. What do you call a witch that lives on a beach?

12. What is the best medicine to treat vampire cough?

Because they felt rotten.

14. What is the favorite food of the vampire family?

16. Which song do vampires never play at the party?

You are my sunshine.

17. Why do you call a skeleton that sits down on the?

19. What is the first sign that your house is haunted?

Your bedsheets will be missing.

20. What do you call a breakfast service run by witches?

22. What is the favorite pastime of bats?

Hanging out with friends.

23. What is the favorite music genre of mummies?

24. What do demons eat for breakfast?

25. Which brand of underwear do mummies wear?

26. Why should you never trust stairs?

They are always up to something.

27. What is the best Halloween costume for dads?

28. What does a vampire dad hate to barbecue?

29. Where did Dracula’s father take him when he was sick?

To the witch doctor.

30. What does a ghost couple do when they fight?

They ghost each other.

31. Why do old vampires read newspapers at night?

Because it has good circulation.

32. Which fruit vampire dad often brings for his family?

33. Where do vampires take their family for vacation?

34. Why don’t mummies have too many friends?

Because they are so wrapped up in themselves.

35. Who doesn’t need a Halloween costume?

36. Where does the vampire store brooms in the home?

In the witch closet.

37. What does a ghost-like cook for his family?

38. What does a ghost baby make for their father on Father’s Day?

39. How does a ghost father cheer up his crying son?

With lots of spirits.

40. Where does ghost dad take their family for vacation?

41. Where do ghost dads often hang out?

In the club to drink boos.

42. What does a panda ghost eat for dinner?

43. Why are demons the best friend of ghosts?

Because demons are great at ghosting people.

44. From where do ghosts order their groceries?

45. What is the favorite dessert of witches?

46. Why are ghosts, terrible liars?

Because you can see right through them.

47. For which job do ghosts train their kids?

48. What do ghosts wear to improve their vision?

49. Where does a ghost search on the Internet?

50. Why do ghosts hate to rain on Halloween day?

Because it dampens their spirit.

52. Knock knock? Who’s there? Butter. Who is Butter? Open the door; I have a Halloween joke to tell.

53. Knock knock? Who’s there? Donut. Who’s Donut? Donut worry; I am only here to tell a Halloween joke for kids.

55. Knock knock? Who is there? How. How who? How are we going to hide this dead body?

56. Knock knock? Who’s there? A witch. Who is the witch? Which one of you can help me fix my broomstick?

57. Knock knock? Who’s there? Imogen. Who is Imogen? Can you imagine your life without Halloween chocolate?

58. Knock knock? Who’s there? Lettuce. Lettuce who? Let us come in to celebrate Halloween.

60. Knock knock? Who’s there? Yvonne. Who? Yvonne to suck your blood.

61. Knock knock? Who’s there? Ghost. Ghost who? Your ghosted friend to boo you.

62. Knock knock? Who’s there? Turner. Turner who? Turn you into a vampire.

63. Knock knock? Who’s there? Diamond. Who Diamond? Diamond, the Dracula to wish you a happy Halloween.

64. Knock knock? Who’s there? Bee. Who Bee? Just want to bee-ware you to stock up on your Halloween candies.

65. Knock knock? Who’s there? Vampire. Who is a Vampire? Just vaporize into thin air before I suck your blood.

66. Knock knock? Who’s there? Dustin. Who is Dustin? Just remind you to dust up your Halloween costume from last year.

67. Knock knock? Who’s there? Gabrielle. Gabrielle who? Grab your Halloween costume and suck up some blood.

69. Knock knock? Who’s there? Green. Green who? Green monster to eat all your Halloween candy.

70. Knock knock? Who’s there? Pumpkin. Pumpkin who? Pumpkin is looking for its patch.

71. Knock knock? Who’s there? Craving. Craving who? Craving for your blood.

75. Knock knock? Who’s there? Ben. Who is Ben? Ben waiting for your Halloween party for the entire year.

76. On which day are ghosts most scary?

77. Which is the favorite day of ghosts?

78. What do you call when two vampires are racing?

Vampires are racing neck to neck.

80. Which musical instrument are skeletons allowed to play?

81. Which is the favorite coffee flavor of vampires?

To my dead mate.

84. Why do ghosts love to shop from seals?

Because they are born hunters.

85. What does a vampire doctor do to treat patients?

They run lots of blood tests.

86. Why does a skeleton play music at every Halloween party?

Because they don’t have organs.

88. Where do most ghosts live?

89. What is the favorite profession of ghosts?

Because it was dead tired.

91. When do cows turn into wolves?

When there is a full moon.

92. What type of shoes do ghosts wear?

93. Where do ghosts go shopping?

They do job hunting.

95. Why do ghost comedians never succeed?

Because they always get booed.

96. Why are ghosts good at predicting the future?

Because they daily check the horror-scope.

97. Why do two skeletons always bicker?

They always have a bone to pick.

98. Which season do skeletons hate the most?

They hate cold because it’s bone-chilling.

99. What did the skeleton bring to a potluck?

100. What sports does pumpkin play?

101. Pumpkins are never good friends; they are too seedy.

Halloween is about going overboard with spooky decorations, costumes, and, importantly, being with your family. So, if your family is not in the Halloween spirit yet, start cracking hilarious and corny jokes with your kids now. It will reduce all festival stress and put your child in the right mood to trick-or-treating.

So, happy Halloween, and let’s make this scary season horr-ious.

What exactly is Halloween, and why is it celebrated?

The origins of Halloween can be traced back to the ancient Celtic festival known as Samhain, which was held on November 1 in modern calendars. People dressed up in costumes and lit bonfires to ward off spirits on that day, as it was believed that the souls of the dead returned to their homes.

Why is humor important for children?

For a good reason, they say laughter is the best medicine. Children with a sense of humor develop resilience, self-esteem, and critical thinking skills. When a child can tell or understand a joke, it demonstrates that they can think rationally about sentence structure and even social constructs.

What are the top three Halloween traditions?

Carving pumpkins, trick-or-treating, and dressing up in scary costumes are all time-honored Halloween traditions.

What do children do on Halloween?

At night, children celebrate the day by going trick-or-treating. They go door to door, yelling, “Trick or treat!” The person who answers the door usually gives them candy. Other Halloween activities include costume parties, parades, bonfires, haunted houses, and pumpkin carving.