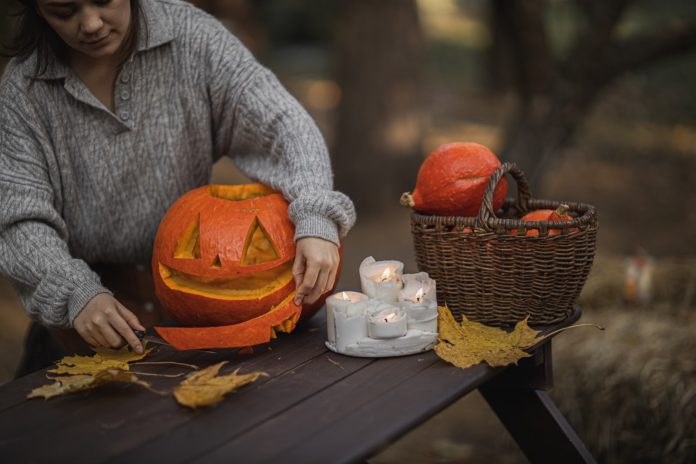 Do you know how the tradition of Halloween began? Have you ever wondered what a male witch is called? Do you know whether a pumpkin is a fruit or a vegetable? Should you be scared of babies born on Halloween? Let’s dive into more such Halloween trivia questions!

Jack o’ lanterns, pumpkin pies, and lots and lots of candy! Everybody loves Halloween! You get to wear your favorite costumes,  go trick or treating, and get your spook on!

How To Play Trivia With Kids: Rules & Tips

Since trivia questions about Halloween revolve around general knowledge and the heritage of the festival, it’s crucial to keep the players interested while having fun. So, all you need to arrange is for kids to sit, maybe have some snacks, and listen to each question carefully.

In the midst of this spooky season, it’s difficult to grasp the scale of the rich lore, history, and popular culture associated with Halloween. And that’s what makes it perfect for some fun Halloween trivia questions!

When To Play Halloween Trivia For Kids?

The entire day will be filled with fun costumes, planning trick-or-treating, and enjoying the evening counting their candies, so keep the questions ready from the morning of Halloween day itself. In fact, you can even start a day or two before Halloween night so kids are excited leading up to the holiday.

Keep these questions handy and pop some out whenever you get some time with the kids. You can count on these Halloween trivia questions and answers for kids to sneak in a little learning underneath the spook, trick or treating, and candies.

A tradition that began hundreds of years ago, people wore masks when they left their homes. They wore masks and scary costumes, hoping that real ghosts would think the people were also ghosts. Legend has it that this practice began the custom of wearing Halloween costumes on our favorite night of the year.

Answer: A teal pumpkin signifies that you are offering treats suitable for people with allergies. According to the article, placing a teal pumpkin in your yard announces that you offer non-food treats to trick-or-treaters.

People with this specific phobia feel anxious when they think about or experience anything to do with Halloween. Many people with samhainophobia have gone through a past traumatic situation related to Halloween.

This was originally given to kids and the poor as a treat when they went from house to house singing and praying for the dead.

Answer: In the late 1880s. This iconic candy was invented by an employee of the Jelly Belly Candy Company, and they use the original recipe even now.

Answer: For the celebration of Samhain, people would put treats or food out to pacify evil spirits.

This ritual has been a tradition in the United States and other Western countries for centuries, and marks the end of a bountiful harvest for the summer and the beginning of the dark, cold winter.

Answer: Their giant Halloween kite festival. To honor the dead, the people build brightly colored kites and fly them in cemeteries.

Answer: In the United States, a blue pumpkin bucket might mean that the trick-or-treater has Autism.

This relatively new practice is worth spreading awareness about. Keep this in mind if you see any blue pumpkins this year.

Answer: The Legend of Sleepy Hollow.

‘The Legend of Sleepy Hollow” tells the story of a schoolteacher named Ichabod Crane and his experiences with the Headless Horseman. It is a story by Washington Irving, a man who wrote many different kinds of books and helped protect writers’ work from being stolen. He was called the first true American writer.

As a result, neither Heaven nor Hell welcomed Stingy Jack, so he was left to eternally roam the earth. The Irish people carved demonic faces into turnips to scare Jack away.

Answer: In the 16th Century.

While trick-or-treating has been a tried and true modern Halloween tradition, historians say the origins of kids begging their neighbors for food may date back to ancient Celtic celebrations or even a long-lost Christmas custom.

In Alabama, it’s illegal to dress up as a priest, nun, or other religious clergy member for Halloween.

The holiday, which is celebrated mostly in Mexico on November 1 and 2, is like a family reunion—except dead ancestors are the guests of honor. Day of the Dead is a joyful time that helps people remember the deceased and celebrate their memory.

Answer: It is thought to be the spirit of a loved one watching over the person.

Because of their ability to spin webs, folklore often depicts spiders as storytellers and fortune tellers. When talk of witches began to rise, these stories grew entangled with witchcraft. Spiders supposedly assisted witches in casting spells, and eating a black spider between two slices of buttered bread gave a witch great power.

Today, carving pumpkins into jack-o’-lanterns is popular during Halloween. In the 19th and early 20th centuries, however, chiseling scary grins into turnips was the more common practice (at least in Ireland and other Celtic nations).

The traditional black color that is so closely correlated with Halloween was chosen to represent just that. Death and darkness. The history of Samhain explains why there are so many black items associated with the eerie holiday, like bats, witch hats, spiders and cats.

A warlock is the male equivalent of a witch or sorcerer. Like witches, warlocks are male practitioners of witchcraft!

Answer: Slender Man. He was born as a meme on creepypasta. He is shown as an unusually tall, thin, human-like figure with a featureless face and black suit.

The besom is the traditional witch’s broom. It’s associated with all kinds of legend and folklore, including the idea that witches fly around in the night on a broomstick. If you’d like to learn how to make your own besom at home, you should check this out!

Answer: Bonfire toffee, made from black treacle, butter and sugar. It comes in sheets, and is absurdly brittle.

The legend of Frankenstein is one of the most gruesome stories ever imagined. This giant monster is made out of body parts stolen from the graveyard, sewn together by a mad scientist in a laboratory, and finally he is brought to life by electricity.

Answer: The ability to see and talk to spirits.

Answer: Mexico. Check before taking a bite though, as they could be meant for the dead.

Answer: Someone in the house will die.

Bats are commonly said to indicate that the house they frequent is haunted, and an old German myth relates that if a bat flies into your house, the devil is after you.

Every pumpkin you grow can be one of four different colors, including orange, green, yellow, blue, and white. There’s no way to determine which color a pumpkin will be after its seeds have been sown. People usually keep growing pumpkins until they have the colors they need. Out of every 10 pumpkins, 7 are usually orange and the remaining are a combination of blue, yellow, white, and green.

Many of the negative superstitions associated with black cats come from a poem written by a Roman poet named Ovid. Black cats are often the least adopted and most overlooked cats in animal shelters.

On the other hand, in some cultures, black cats are a symbol of luck and happiness. For example, in England, the Netherlands, and Asia, black cats are respected and adored.

The collection of bones in an animal’s body is called a skeletal system, or skeleton. Mammals, birds, reptiles, amphibians, and fish have skeletal systems.

One popular term for werewolves, lycanthrope, comes from the Greek word lykos, meaning “wolf.” One Greek myth concerns a man named Lycaon who was turned into a wolf by the gods as a punishment for trying to trick the god Zeus into eating human flesh.

Answer: Your future husband or wife.

This isn’t the only sooky mirror superstition around! Some people believe that if a loved one dies in their home, you need to cover the mirrors. They believe this because if they don’t, their soul could wander around and get trapped inside a mirror.

Who would’ve thought, right? But it gets even more interesting. A pumpkin is technically a fruit of the berry family.

The beginnings of the vampire-bat association are relatively simple. When the Americas were discovered by Europeans in the late 15th and 16th Centuries, explorers found the presence of the ‘Desmodus Rotundus’ in Central and South America, the creature that would later become known as the ‘Vampire Bat’.

A mummy is a dead body that is preserved either naturally or by chemicals. Ancient Egyptians believed in life after death, and mummification, or the process of making a body into a mummy, was a way to prepare the body for that afterlife.

The first trick-or-treaters were poor children in medieval Europe, who would go door-to-door begging for food and money during the Celtic holiday Samhain, celebrated on October 31. In exchange, they would offer to pray for the souls of their neighbors’ recently departed loved ones.

Answer: I Put a Spell On You.

The movie Annabelle is based on a haunted doll kept in the Occult Museum in Connecticut.

Answer: I Put a Spell On You, a song written by Jay Hawkins.

With the rich lore and history associated with this holiday, Halloween trivia for kids is a must! Use such questions to expand their horizons, teach them about the history of modern traditions, and how they came into practice today. Children who have an understanding of different cultures can build an appreciation for those cultures.

This doesn’t just mean they’ll be more socially well-equipped in the future, but also that they will start working on their interpersonal skills from an early age.

Is there any way to make these games more exciting?

Absolutely! Feel free to play around and experiment with how you deliver these fun trivia questions! You can try writing them down on ‘scrolls’ and putting them in a small box for kids to draw as they take turns, or promise a spooky treat for the winner!

When is the best time for a game of Halloween trivia questions for kids?

Parents, Sign Up for Free
Previous article100+ Funny and Horror-ious Halloween Jokes for Kids to Get Into the Holiday Spirit
Next articleMake Learning Fun With These 15 Math Activities for Kindergarten
RELATED ARTICLES
Festivities