Area and Perimeter Games for Kids

SplashLearn’s online area and perimeter games are a fun alternative to worksheets. While third graders calculate perimeter and area of simple shapes, fourth graders work with complex figures and make use of the written method to calculate area and perimeter.
Sign up and get access to our entire library of 37 Area and Perimeter Games & 51 Math courses

The game requires students to complete a set of challenging tasks and the students learn a new concept in perimeter in the process. This game will help your third grader learn peri...

Help your child become fluent in perimeter with the help of this super fun game. The game involves working with a set of problems on unit length to find the perimeter, which helps ...

Learn to Find the Perimeter

This game consists of smartly designed tasks to help your young mathematician learn the concept of perimeter. The student will learn to find the perimeter by adding the side length...

Help your child learn perimeter in an efficient manner with this challenging game. The game encourages students to apply their understanding of addition to find the answer. The stu...

Find the Perimeter of the Shapes Using Grids

Building a strong foundation in the concept of perimeter and area is an important step in helping your child become proficient and confident. The game gives students plenty of oppo...

FInd the Perimeter of Polygons

The game challenges young mathematicians to hone their math skills by solving a set of problems on geometry to find the perimeter. Students will select the correct answer from the ...

Find the Perimeter of the Squared and the Rectangles

Help your child become an expert in the concept of area and perimeter with this game. Concepts like perimeter can be confusing for kids, but with practice they can gradually get mo...

Find the Perimeter of the Quadrilaterals

Kids often develop misconceptions about concepts in mathematics, including perimeter. It is important to help them get over those misconceptions. The game invites learners to work ...

All Area and Perimeter Games for Kids

Kids often develop misconceptions about concepts in mathematics, including perimeter. It is important to help them get over those misconceptions. The game provides learners with op...

Identify the Perimeter with Unit Squares

The game requires students to work with a set of problems on unit squares and use their conceptual understanding to find the perimeter. Students will need to analyze and select the...

The game has a set of problems logically crafted for your child so that they learn the concept of perimeter. The student will find the perimeter of regular shapes in this game. You...

Find the Perimeter of Regular Shapes

Students' struggle with perimeter is often attributed to a lack of adequate practice. Timely and effective practice with a focus on fundamentals will help your child become more pr...

Give your child food for the mind with this game on the perimeter. The game requires students to work with a set of problems on the perimeter and use their conceptual understanding...

Find the Perimeter of Irregular Shapes

Struggles with perimeter can be easily overcome if students practice the concept in a fun and engaging way! Here students add side lengths to find the perimeters of irregular shape...

Find Missing Side of Regular Shape

The game strengthens students' problem-solving ability while they learn the concept of perimeter. The student will find the missing side of the regular shape in this game. Your thi...

Find Missing Side of Irregular Shape

Improve your child's proficiency in perimeter with this game. The game provides learners with opportunities to work on a set of well-designed problems, enabling them to learn the c...

Determine the Perimeter of Regular Shapes

The game requires students to use two-dimensional shapes to extract information and answer questions on perimeter and area. This set of problems deals with regular shapes; students...

Give your child food for the mind with this game on finding perimeter. There are misconceptions that are often associated with concepts like perimeter, but those can easily be put ...

Find the Unknown Side Length

Building a strong foundation in perimeter is an important step in helping your child become proficient and confident. The game will help your young mathematician to develop fluency...

Mischievous monster spilled water all over! And granny was swept away in her sleep! Can you rescue granny before she wakes up? The game ensures active student participation through...

Granny is tucked in her bed and is sleeping like a baby. Are you ready to stop this and rescue granny? Nudge your child towards mastery in the area with this super fun game. The ga...

Identify the Area with Unit Squares

The game gives students plenty of opportunities to work with problems based on unit squares. They are encouraged to apply their mathematical knowledge to find the area. Students wi...

Find the Area with Unit Squares

Improve your child's proficiency in finding area and perimeter with this game. Concepts like these can be confusing for kids, but with practice they can gradually get more comforta...

Determine the Area of Rectilinear Shapes

Kids often develop misconceptions about concepts in mathematics, including area. It is important to help them get over those misconceptions. The game challenges young mathematician...

Area with Unit Squares and Side Lengths

The game encourages students to use unit squares as a tool to develop a solid understanding of area and perimeter. Students will need to correctly fill in the model to solve the gi...

It's time to help granny. After all, we don't want to make her angry if she gets to know about the water that has spilled. Are you ready? The game is about solving a set of problem...

Multiply to Find the Area

The monster is in trouble if granny wakes up! Let's count the tiles and help granny sleep happily in her bed. Time to punish the monster! They are encouraged students to apply thei...

Multiply Side Lengths to Find the Area

Granny is asleep and we wouldn't like it if she woke up, because that would mean trouble. Are you ready to take care of the water that the monster spilled? Here your young mathemat...

Find the Area by Multiplying the Side Lengths

Nudge your child towards mastery in calculating area and perimeter with this super fun game. The game aims to build proficiency in area, where students multiply the side lengths to...

Find the Area of the Composite Figure

This fun and exciting game will make you understand the concepts of the area in a fun and interesting way! Rescue granny for all the fun! The game challenges young mathematicians t...

Granny, granny, on the bed. She is sleeping, leave all the rest. The game consists of problems of different structures and by solving them, the students learn a new concept in the ...

Struggles with the concept of area in geometry can be easily overcome if students practice the concept in a fun and engaging way! Here your young mathematician will learn a new con...

Add to Find the Area

The game includes visual representations, which prepare students for abstract concepts of geometry in the course. Students find areas of composite shapes. They calculate areas of i...

Identify the Area of Composite Shapes

Boost your child's understanding of geometry and measurements with this game. The game requires students to find areas of composite rectilinear shapes. They break the shape into re...

The game requires students to recall concepts related to geometry and find the area to move towards mastery in the topic. They are encouraged to use the given model to find the per...

Find Area by Multiplying Side Lengths

Your child will practice the concept of area and perimeter with this colorful game. Students' struggle with geometry and measurement is often attributed to a lack of adequate pract...

Find the Area of the Shapes

Struggles with the concept of area can be easily overcome if students practice the concept in a fun and engaging way! The game challenges students to solve a set of problems on geo...

Area of a figure is the size of the region enclosed by the figure. In layman terms, the area may be understood as the space occupied by a shape or simply put as space inside. Consider a sheet of paper lying on a table. This sheet of paper occupies space on the surface of the table. So, the figure of the sheet of paper is a rectangle and the size of the region enclosed by the paper is the area of the paper. The area is usually expressed in terms of square units. In everyday terms, the area can be described as the number of unit squares that can be fitted to that figure. 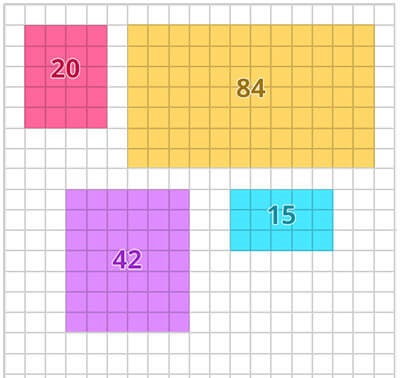 These activities for kids make them understand the concept of area in square units. When the child starts ranking different shapes visually in terms of area ask questions why he has chosen the certain shape and reiterates the concept of length and breadth in rectangles. Make the child understand that it is not necessary to find out the bigger rectangle visually. These math games enforce the child to understand the relevance of numerically calculated area of a rectangle and establish that visual inspection is not always the best method of comparison. Math games using this grid paper to explain area and perimeter using examples of everyday math clears misconceptions of mathematics in kids.

Area Formula for a rectangle is Length multiplied by Breadth.

This area game is one of the most effective educational games for children to dig deeper into the concept of area math of rectangles and comparison of two rectangles.

Create area worksheets using the above area games such as Dog Kennel and make the child practice area math using different shapes to understand the concept more. Have the child make different shapes such as trapezoids, parallelograms, squares. Introduce math formulas for area of a trapezoid, parallelogram, and square. Math formulas are to do fast math. An example of fun math activities focused on the area of a trapezoid is shown below:

In everyday math, the shapes are not always rectangular. Therefore, using different shapes in area games and area worksheets will make the children understand the relevance of area in math.

In the Area Game of Dog Kennel mentioned above, when the children are told that the borders of rectangles are fences of the Kennels, a perimeter game may be designed and the same worksheet must be used to introduce perimeter. As the worksheet is on a 1cm grid, the length of sides must be expressed in cms by counting segments connecting the dots. Now, have the child calculate the perimeter by the formula 2(l+b) and compare both the results. 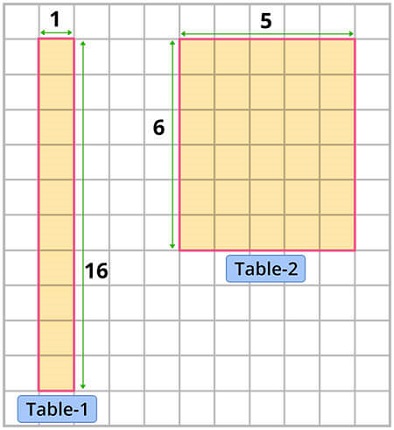 Have kids solve math word problems below on area and perimeter worksheets.