SplashLearn’s games on Multiplying Fractions provide fun and practice in a lively and exciting game format. Children develop a cognitive idea of fractions using fraction models and area models. They work on a gamut of word problems which reinforces their understanding of fractions.

All Multiplying Fractions Games for Kids

Q1: How do you multiply a fraction times a whole number?

Q2: How do you multiply decimals by whole numbers?

Q3: How do you multiply fractions?

Q4: How do you multiply two mixed numbers?

Fraction is a representation of a part of a whole.

The fractional notation widely used is

The line that separates the numerator and the denominator is called a fraction bar.

The main manipulatives used for teaching fraction are pictures, fractional models, and the number line.

For example, the colored portions in each of the models represent one part of equally divided parts of a whole. 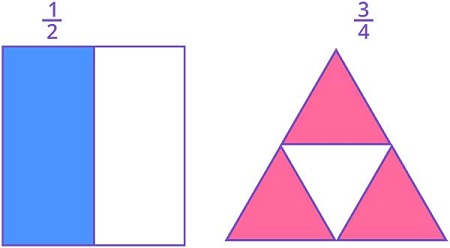 Another way to represent a fraction is using the number line.  span class="c0">

on a number line, first, divide the part from 0 to 1 into 4 equal parts. Now, each part represents one-fourth of a unit and so,

can be marked as:

A thorough practice of the topic fractions at the introductory grades is highly recommended. This reinforces the basics and gives a strong foundation for the topic. Fractions worksheets for identifying fractions and modeling fractions are available in SplashLearn.

A subject like Math is taught in a very mechanical way in a traditional class room. This involves a lot of arithmetic calculations without teaching the fundamentals well. This leads to the lack of interest towards the subject. SplashLearn provides a well structured, activity based learning program to solve this problem. The math games and activities here introduce children to complex fundamentals of mathematics in a very interesting way. This way children can relate more with the subject.

Children consider playing games as a fun activity. They do not mind a higher number of repetitions. This gives a chance for a lot of practice for each topic and expertise in the same. So, usage of math games is highly recommended to learn mathematics.

While multiplying fractions calculators can give you the product, it is important to understand the concept behind it. Children can relate better to a topic when they have a first-hand experience of the application of the concept. So, it is always a great idea to start the topic multiplying fractions using an example of fraction which they are familiar with, in their day-to-day life.

Multiplication of a fraction by a whole number:

Primary graders may find multiplying fraction as a boring mechanical calculation. Introducing it with a real-life situation like below would help the kids to relate to it better.

Rhea is making Lemonade for her and her 6 friends for a birthday party. She knows that

th of each glass of lemonade need to be fresh lime juice. To estimate the amount of lime juice required, she can multiply the fraction

She also has to serve

th of a pizza for all 7 of them. So, to estimate the number of pizzas required, again she can do the multiplication,

Now, how to multiply fractions by whole numbers?

A pictorial representation of the second situation can be shown as below:

Another representation for the multiplication of a fraction by a whole number is using the number line: 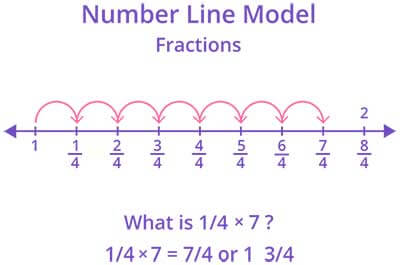 SplashLearn has a lot of worksheets and math fraction games for kids on the topic.

Consider the area of a rectangle with fractional side lengths. It would be a good example of multiplying a fraction by another.

For example, a rectangular dining table has the dimensions

meter. The area covered by the dining table can be obtained by multiplying the fractions

A pictorial representation of multiplying two fractions can be shown as below: 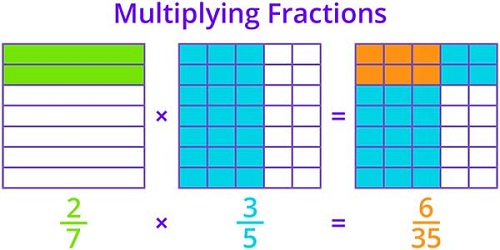 SplashLearn covers this topic very well with a lot of practice problems which will give a strong foundation for future calculations.

Relatively simple fractions are introduced in Grade 3 with denominators 2, 3, 4, 6 and 8 using pictures, fractional models, and the number line. Once the student is familiar with fractions of numerator 1, they identify a fraction

as the summation of

,  added a times. That is, the fraction

is obtained by adding two

is obtained by adding four

In Grade 4, operations with fraction advances to the multiplication of a fraction by a whole number. This is introduced using fraction strip visual models and the number line.

At this level, children can recognize the multiplication of a fraction by a whole number using fraction strips. This pictorial representation helps children to have a geometrical understanding of the calculations.

The children can also design the number line representation of a similar multiplication.

By Grade 5, children are clear with the concept of multiplying a fraction by a whole number using visual models. So, they are ready to directly multiply by considering the whole number as a fraction with a denominator 1. For example, the number 75 as a fraction can be written as 75/1.

Now the multiplication is a simple process. Multiply the numerators as well as the denominators separately for the two fractions.

That is, a multiplication of

is an improper fraction and can be converted to a mixed number as 71/5.

Now, this is basically to multiply two fractions. The children already know that the basic rule for that is to multiply the numerators as well as the denominators separately.

For example, for multiplying fractions

, the calculations are as shown below:

For mixed numbers, first, rewrite them into improper fractions. Then, proceed with multiplying fractions.

Multiplying fractions worksheets would help kids to get fluency in computation.

Children also use the understanding of the concept to solve real world problems for multiplying fractions and mixed numbers.

Another related topic discussed here is the interpretation of multiplication as scaling.

That is, for the fractions

would be less than

would be greater than

For example, identify the multiplication represented in the below fraction strip.

Here each of the addends is a unit fraction, one-half and there are 4 such addends.

So, the multiplication represented is

In each of the addends, there are two-fifths of the parts shaded and there are 3 such addends.

Thus, the multiplication represented is

If you arrange the shaded parts in the consecutive one-fifths we get:

This is precisely the product

Each leap moves two-fifth of a unit to the right. Since the multiplication is by 3, after the third leap it reaches the product

The arithmetic computation of this would be

When the multiplication is with two fractions then both have to be shown as different fraction strips. Consider the product

. This can be represented as: 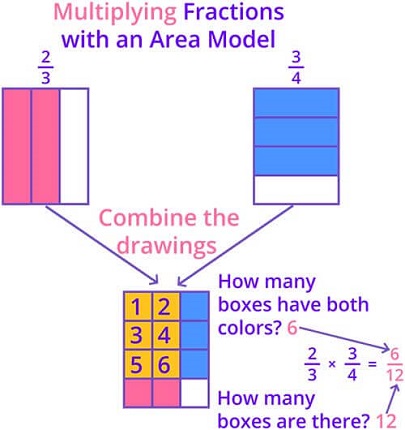 The arithmetic computation of the multiplication can be done by multiplying the numerators and denominators separately as shown.

Identifying the fractional models and practicing the arithmetic computation together will give the children a strong base for solving fractional problems in later years. SplashLearn provides step-by-step structured learning skills for the same. Children can practice multiplying fractions worksheets .

When two fractions are multiplied with at least one of them being a mixed fraction, the first step is to convert the mixed fraction into an improper fraction. Then, multiply the numerators and the denominators separately, just like two fractions.

Make sure to follow the math order of operations while rewriting the mixed fraction.