What is a Polyhedron?

We know that a polygon is a flat, plane, two-dimensional closed shape bounded by line segments. Common examples of polygons are square, triangle, pentagon, etc.

Now, can you imagine a three dimensional figure with faces in the shape of a polygon? Such a three-dimensional figure is known as a Polyhedron. Examples you must be familiar with are diamonds, rubik’s cube, pyramids, etc.

A three-dimensional shape with flat polygonal faces, straight edges, and sharp corners or vertices is called a polyhedron.

Common examples are cubes, prisms, pyramids. However, cones, and spheres are not polyhedrons since they do not have polygonal faces.

The plural of a polyhedron is called polyhedra or polyhedrons.

The parts of a polyhedron are classified as faces, edges, and vertices.

The figure given below will give us a better view:

Polyhedrons can be broadly classified as prisms, pyramids, and Platonic solids. Let’s understand each type.

A prism has its both ends (base and top) as identical polygons and its side faces are flat (rectangles or parallelograms). Prisms are named after its base, which can be a triangle, square, rectangle, or any n-sided polygon.

A pyramid has its base as any polygon and its side faces are triangles with a common vertex (known as apex). If the base of a pyramid is an n-sided polygon, then it has (n+1) faces, (n+1) vertices, and 2n edges.

In Platonic solids, all the faces are congruent regular polygons and the same number of faces meet at each vertex.

We can observe several polyhedra in our daily existence such as a Rubik’s cube, dice, buckyball, pyramids, and so on. A diamond is one of the real-life examples of polyhedron.

An irregular polyhedron has polygonal faces that are not congruent to each other. It is made up of polygons having different shapes. So, all its components are not the same.

Polyhedrons can also be divided into convex and concave categories, just like polygons.

There is a relationship between the number of faces, edges, and vertices in a polyhedron, which can be presented by a math formula known as “Euler’s Formula.”

Hence, the cube is a polyhedron.

1. How many types of regular polygons are there?

Solution: There are 5 types of regular polygons: tetrahedron, cube, octahedron, dodecahedron, and icosahedron.

2. Check if the polyhedron with 10 vertices, 8 edges, and 4 faces exists or not.

Solution: We will apply Euler’s formula:

The polyhedron with the given dimensions does not exist.

3. How many faces does a polyhedron with 12 vertices and 18 edges have?

By applying Euler’s formula, we get

Which of the following is not a polyhedron?

Cube
Cone
Cuboid
Triangular Prism
CorrectIncorrect
Correct answer is: Cone
Cone is not a polyhedron as the faces of the cone are curved.
2

Which of the following is a concave polyhedron? 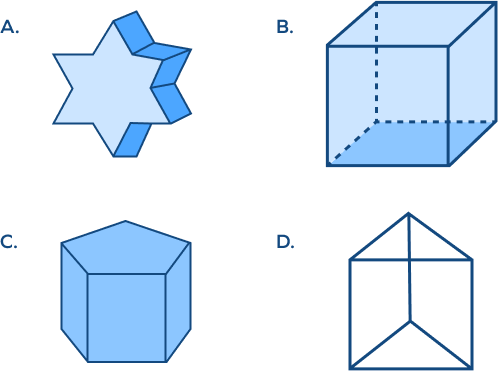 A
B
C
D
CorrectIncorrect
Correct answer is: A
If we draw a line from one face to another, the line will lie outside the polyhedron.
3

Which of the following combinations will not form a polyhedron?

Which of the following is not a regular polyhedron? 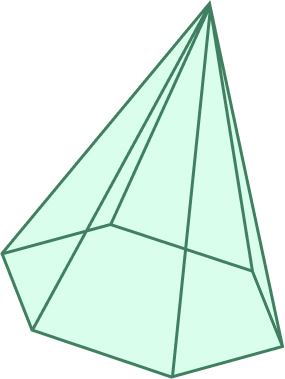 What is the difference between a polygon and a polyhedron?

A polygon is a two-dimensional figure, which is made up of line segments. For example, square, triangle, hexagon, etc.

On the other hand, a polyhedron is a three-dimensional figure that is made up of polygons. For example, tetrahedron, cube, etc.

Is a cylinder a polyhedron?

What is the difference between a pyramid and a prism?

Both a prism and a pyramid are three dimensional solids that have flat faces and bases. The main difference is that a prism has its two bases (top and bottom) identical whereas a pyramid has only one base.