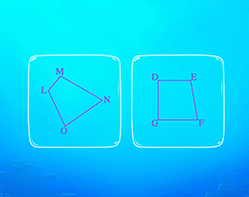 What is Right Angle?

In geometry, when two rays meet each at a common point, they form an angle. The point of meeting of two rays is known as the vertex.

Angles are measured in degrees (symbol: ˚)

Some common types of angles are acute angles, right angles, and obtuse angles.

The given image shows various formations of the right angle.

We can find the right angles in shapes.

A square or rectangle has four corners with right angles.

Examples of right angles are all around us. We can see right angles in the corners of a room, book, cube, windows and at several other places.

A vertical and a horizontal line make most common right angles. However, diagonal lines intersecting each other also form right angles. If you draw the diagonals of a square, a rhombus or a kite, the angle at the intersection is 90 degrees and is, therefore, a right angle.

Example of a rhombus and a kite with diagonals intersecting at a right angle.

How to draw a right angle using a protractor?

1. Start by drawing a horizontal line.

2. Now place the protractor on the horizontal line.

4. Now using a scale, draw a straight line from this point to the horizontal line.